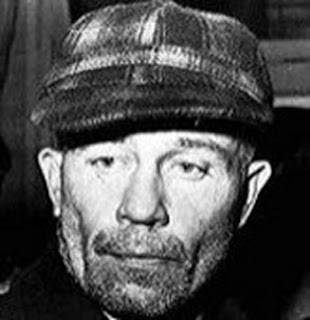 So, what makes a person a serial killer? What do they have in common? Can we predict who might become one?

(From www.TruTV.com) The FBI defines a serial killer by these standards: A minimum of three to four victims, with a "cooling off" period in between; The killer is usually a stranger to the victim — the murders appear unconnected or random; The murders reflect a need to sadistically dominate the victim; The murder is rarely "for profit"; the motive is psychological, not material; The victim may have "symbolic" value for the killer; method of killing may reveal this meaning; Killers often choose victims who are vulnerable (prostitutes, runaways, etc.)

Statistically, the average serial killer is a white male from a lower-to-middle-class background, usually in his twenties or thirties. Many were physically or emotionally abused by parents. Some were adopted. As children, fledgling serial killers often set fires, torture animals, and wet their beds (these red-flag behaviors are known as the "triad" of symptoms.) Brain injuries are common. Some are very intelligent and have shown great promise as successful professionals. They are also fascinated with the police and authority in general. They have either attempted to become police themselves but were rejected, worked as security guards, or served in the military. Many, including John Gacy, the Hillside Stranglers, and Ted Bundy, have disguised themselves as law enforcement officials to gain access to their victims.

So, the soup mix that makes an ideal serial killer includes bedwetting, lighting fires, and torturing and killing animals. It also is a psychopathic/sociopathic personality caused most often by; loss of one parent, withdrawal of attention and love from parents, criticism at home while family acts perfectly normal publically, and inconsistency in discipline with one parent being very tough (end up hating authority) and one is very gentle (manipulates “stupid, weak” mother). Genetically, they appear to have less anxiety and fear and it takes more to stimulate them in that way.

With a combination of isolation and anger, their sick fantasy life becomes their escape. Killing does not live up to the fantasy in their head and so they reenact it over and over in an attempt to satisfy. In their fantasies they are in power, stronger than normal, better than others. Imagine for a moment the power in a sick person’s head if he is walking around thinking “you stupid people, you have no idea how this very minute I am deciding if you live or die.” It is an arrogant and disturbing alternate world in which they exist.

Movie serial killers are chilling. Real life ones even more so. After all, they are the ones swimming in the public pool with us, walking towards us on the sidewalk, shopping in the lane next to us in the grocery story. We can’t know if they wet their beds, torture animals, start fires, or impersonate the police. We could even be holding a door open for one as we exit a store.

Real life is so much more horrifying than movies, isn’t it?