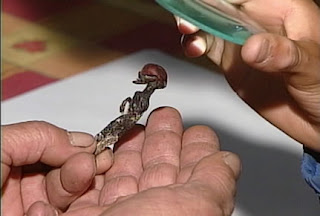 I admit I was thrilled when “Destination Truth” rushed to Chile to look at some mines that were supposedly inhabited by little alien creatures and the strange lights seen around the area. They did have some interesting occurrences involving lights and the possible finding of a chicken skeleton wrapped in cloth (sans its head) which was probably some kind of ritual offering to ward of bad things.

I’m interested in Chile because it has the largest copper mines in the world. It is also part of the world that has an enormous amount of UFO sightings. Whether mining and lights go hand-in-hand, I can’t prove, but I do think there is definitely a connection. I also can’t say if they’re UFO lights or they’re spooklights created by the awesome earth composition there.

In searching for what’s up with the supposed “Mexican alien baby” (much touted on “Monsterquests” episode about flying humanoids), I got diverted by the possibility of another “alien baby” in Chile in 2002.

The article on this site was utterly fascinating. Now, I’m about the last person to buy into online hooey or urban legends or any other kind of suspicious story, but I do enjoy conjecture and theories. Sometimes, when these sorts of stories end up being hoaxes, they do prove an important event.

How is that possible?

They make us stop and study something logically, rationally, critically, and then when we have moments of doubt, we consider what we would do if this thing truly was real.

I don’t mind that kind of mental exercise. It’s precisely why I study hauntings and the theories behind them. They keep my skills up because even when I’m debunking, I ask myself “if I can’t find out what caused this and I come to believe it’s truly unexplainable, what is it? What do I do with it?”

The story of this intriguing Chilean alien baby is that in 2002, a vacationing family came across this little creature that was just under 3” long. Apparently, a child found it under the bushes, wrapped it up in paper and it the thing lived for 8 days, sometimes opening its eyes. For now, the family keeps the little mummified “thing” in their own keeping. There’s talk of having it tested but it doesn’t seem like this is going anywhere.

What can we determine from this unusual case?

Well, for me, it’s that alien babies are way cool! I have to admit a fascination with the concept. I can’t quite figure out why this happens south of the border only, but I do hope to find out if such cases have occurred anywhere else in the world.

If this is a mental exercise in “what would I do if…” then, my logical mind says this is an earthly life form, perhaps a cave dwelling creature. Why am I doubtful this thing is a real alien from space? Jeez, about a thousand reasons, but the ultimate one would be basic commonsense.

Take humans for instance. We have opposable thumbs that make us able to create things with our hands. Our ability to walk upright makes us able to cover ground while holding a weapon in our hands. Our advanced cranial capacity gives us powers unlike any other creatures we come up against, the ability to reason and plot. Why would a creature so very tiny, frail, and delicate have developed advanced machinery to reach earth? That would, to me, show a propensity (like man) to manufacture. Manufacturing involves heavy work from ore to metal to construction. If you have a creature with a very high level of intelligence but not much physical strength, you’re more likely to find a creature that’s overly developed in telepathy and the spiritual realm, not the “I fly from here to there” realm. It's natural to work with what you have, and these little land-dwelling shrimps do not have brawn.

You know me, I enjoy conjecture. I just had to write this one up tonight when I found the article. It got my mind thinking and you know that’s a crazy pastime for me.