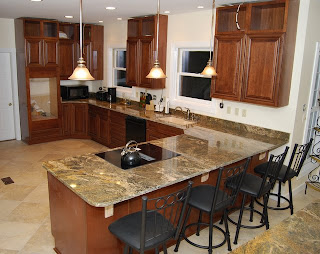 During my studies for the haunted formula, I’ve come across a funny question, but I had to take it quite seriously because part of its answer helps me define my own haunted formula:

If I renovate my kitchen and use granite, can I expect the kitchen to be haunted?

So far in my studies, which are probably 1/3 of the way done, I’ve come to a few conclusions about geology and its effects on hauntings. Most of the more traditional hauntings seem to be linked to limestone and shale (the super-haunted) and sandstone, schist, and other sedimentary rock for others. Most of the poltergeist-like activity is associated with granite and quartz. Lastly, volcanic rock seems to such young rock that it’s not associated with much in the way of hauntings, but it’s debatable about it having a tie-in with strange physical phenomenon in the land such as Marfa Lights and Skinwalker Ranch.

How do I answer the question of the kitchen? A few ways: I am a big proponent of feng shui principles, so I say the use of any material can affect the way the house feels overall to the people living in it. Can it become haunted by using granite countertops? Highly doubtful. In my way of viewing it, if your house sits atop a shelf of granite it's getting its powering through a base to the earth that is large and dense. A granite countertop sitting atop cabinetry isn’t going to be a huge dense mass. It would be intriguing to find out if people in historic old homes with a history of death in them, redo their countertops and find their kitchen gets more haunting than usual. However, I remain doubtful that it wouldn’t be because of general renovations which often kick up activity.

Things are starting to show some real patterns in my research. If anyone out there wants to give a lending hand, let me know. I’m looking for someone who’d like to map out early Native American settlements around the US, copy a map of the US fault lines, and help review evidence from haunted sites to help give them a haunted rating. It’d be great to have someone or some people to pass around the research and see what they can tie together--more heads thinking about it.

Oh yeah, and on the train tracks research, I really have been skeptical about it, feeling as though it’s an incidental finding, but I can’t shake the sensation that there’s actually something to it. Even though tracks are likely to go to towns that depended long ago on them for travel, many of these haunted locales are near rural tracks, often times the only track cutting through an entire county!

Thanks so much for following!