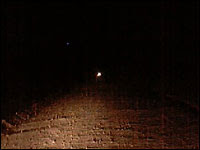 Quite by accident I was researching one of the 50 locations and came across a place called “Devil’s Promenade” and as I just wrote a post about “Skinwalker Ranch,” this really caught my eye with some very strange similarities:

In Northeast Oklahoma, there’s a dirt road. For over a century people have reported seeing an orange orb traveling a roadway called by locals “Devil’s Promenade.” This light was apparently first seen by Native Americans (much like phenomenon found at Skinwalker Ranch). This light is anywhere from the size of a baseball to a basketball. It hovers and speeds along and skims the trees or stays just above the roadway. Even the Army Corp of Engineers has studied this phenomenon, as well as countless others. There have been the usual talked about culprits like swamp gas and natural gas escaping, but no one has come up with an actual explanation. As it is also atop a fault line, some folks have come to the conclusion that it might be rocks rubbing against each other and making an electrical charge.

In any event, this is a really interesting phenomenon and it makes me start to wonder if, along with my desire to check out geology, I could be checking out where Native American settlements were and where fault lines run. It will take a lot of layering maps, but I think in the end I might come across some sort of commonality between these interesting things from ghosts to strange lights.

If anyone else knows of other places with such strange phenomenon, let me know.