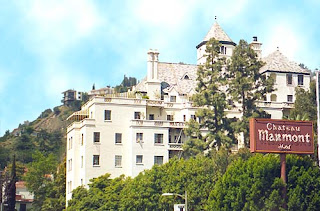 Chateau Marmont, as pointed out to me by Devin, was the site of John Belushi's death. Built in 1927, this huge hillside resort has little bungalows (one of which John met his untimely drug overdose death). It also saw the death of a famous fashion photographer in 2004 when Helmut Newton crashed his car in the driveway. Lots of countless stars have gone to find solace in this tucked away place following divorces, separations, and bombed movies. It seems as if it should have a fantastic set of circumstances for a haunting. I admit that when it comes to Hollywood hauntings, in general, I'm a little suspicious. None of us like to see our stars die, so often times we keep them alive this way. I seriously doubt John would want to haunt the hotel, more than likely it'd be the set for Saturday Night Live in New York.

This site has a few things going for it and here's how it's broken down in score:
1. Older than 50 years.
2. Death associated with it.
3. Land is sedimentary rock.

There is no water or train track nearby.

Building construction--questionable as to the exact construction of this building, but as it was built originally to be earthquake proof, we can make an assumption that the hotel itself is well fortified. The bungalows, however, were built by an architect whose style did not promote stone use for construction, but more modern styling with some having a very Cape Cod cottage feel. I can't give his bungalow a point for construction because of its questionable composition and doubtful stone content.

I have to admit that on cursory examination of reports of hauntings there, there's not much in the way of any solid evidence which made me think that this would have a low score. It's not a totally dud score, as a 3-4 can show evidence of haunting in the future should more occurrences happen there to give the place more of a body of tragic history.

Note: Much of the formula will be altered as I finish my research and comparisons. I hope to find out just how much weight a building's construction holds, how much train tracks or waterways contribute, et cetera.