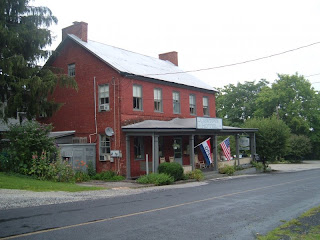 So, if you've watched "Ghost Hunters" you saw a pretty good episode where the team went to this location. They were able to get the sound of booted footsteps (identical to what I heard my entire childhood) and captured a picture frame on a dresser moving--very exciting!

The Cashtown Inn in Cashtown, PA was originally a stagecoach stop. Later, during the Civil War, it was used as a Confederate headquarters and supposedly a field hospital. I relate to the feel of their place, as I grew up in a Civil War field hospital used by both the North and South. The sound of the footsteps really got the hair raising on my neck during that episode.

There are reasons to think this place really is genuinely haunted. I hope to collect the "hard" evidence of haunting found by other teams, but for now I'll settle for the physicality which is promising. Here's how it scores:

Keep watching, more locations coming. I did try purposely to pick a lot of good GH ("Ghost Hunters")locations to make comparisons with what they found and the physicality. Thanks for following the progress.