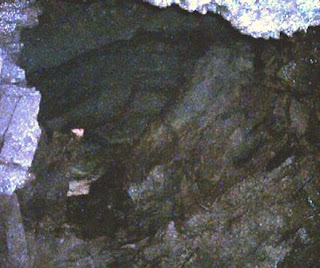 Wow, sometimes when I'm researching, I find conditions that are so ripe, it makes me wonder if traumatic things happen because of the conditions -- like some kind of physics fate, or if when bad things happen there, they're destined to haunt the place. Bell Witch Cave completely surprised me. I remember hearing about it as a kid in Virginia. It was one of my goals to go there and prove it's totally not haunted. I was skeptical. There's folklore legend of witchcraft and then there's genuinely haunted sites like where I grew up at Aspen Grove. In my young mind, they were vastly different. I didn't think Bell Witch Cave deserved to be haunted.

Boy, was I wrong!

Anyone who's heard the legend of the Bell Witch understands the basic mechanics of it. A creepy old lady long ago cursed her neighbor and many think she poisoned him, as well. She vowed to continue to haunt the family and apparently from reports, she did just that. It was believed that not only did she haunt the family's log cabin, but also the cave on the property which many came to believe was her "portal." I'm beginning to believe the portal theory. Now, I'm determined on my next trip East to try and step foot in this cave to feel the conditions for myself. The human body does a wonderful job of picking up on strange energies, pathways, leylines...

Here's how this cave measures up:
1. The land is limestone.
2. The cave is on a bluff at the river's edge.
3. The cave is very old (duh)
4. The cave is associated with death because above it there is a Native American burial mound. In fact, the story goes that a Native American woman's bones were buried in the limestone in the cave and some people dug them up and had bad luck, leaving locals with the belief that if you take anything from the cave, you're cursed.
5. There is a railroad track not far.
6. The cave is made of limestone.

When you add in the conditions of a cave which is of a circular pattern, the limestone which is very strongly related with hauntings, the running river below, and the Native American burial mound, yeah, why wouldn't this be a portal? I would think this is the perfect mix for something that has an energy flow that goes wildly in and out of it nonstop, perhaps even feeding the river, which might explain why locals think the whole town is haunted.

I give this place a score of 6/6 +++ because of the extra factors such as the cave being made of limestone and the Native American burial ground. Sometimes, there are "sacred" places that have a lot of the right elements. I'm sure folks feel that a lot in Great Britain amongst the stone ruins, others feel it in the dark woods of Germany, and other still in the mountainous regions of Turkey, but here in America there are quite a few of our own power points and they aren't just obvious places like Sedona, Arizona, the Grand Canyon, and the Black Hills of the Dakotas. There's more subtle ones that just as powerful. I'm getting closer to knowing what the commonalities are. I can't wait to learn more.

Hope you continue the adventure with me.