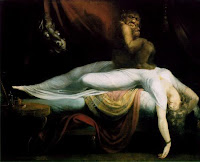 Wikipedia describes it best: “An incubus (plural incubi) is a demon in male form supposed to lie upon sleepers, especially women, in order to have sexual intercourse with them, according to a number of mythological and legendary traditions. Its female counterpart is the succubus. An incubus may pursue sexual relations with a woman in order to father a child, as in the legend of Merlin. Some sources indicate that it may be identified by its unnaturally cold penis. Religious tradition holds that repeated intercourse with an incubus or succubus may result in the deterioration of health, or even death. Medieval legend claims that demons, both male and female, sexually prey on human beings. They generally prey upon the victim when they are sleeping, though it has been reported that females have been attacked while fully lucid. The incubus is sometimes confused with the legendary "Old Hag" syndrome. The Old Hag episode, however, is usually restricted to an unpleasant feeling of great pressure on the chest and not a ghostly sexual encounter.”

As I tackle anything in my ghost hunting, so shall I tackle incubus and succubus. I will throw away any folktales or lore about them. I will simply ask myself,

“Why would sexual arousal during the night be equated with visitation by a demon and is that the only explanation?”

My logical mind wants to delve into the facts about sexual arousal during sleep. Studies have actually shown that women become engorged and aroused just as men get erect during REM sleep. I won’t say how I know it’s true, but I can say with a great enthusiasm that women can have orgasms in their sleep and wake up during it, which causes a great confusion between sleep state and wake state and this physical very real thing happening to their bodies (much like the “hag syndrome” is nothing more than sleep apnea or dreams of having your guts pulled out are only abdominal cramps occurring and your dream state incorporating the sensations into your fantasy state).

Medieval churches had a way of jumping on the hysterical bandwagon with lots of rules for men who ejaculate in their sleep having become “unclean” and having to go through rituals after “polluting” without the intention of procreation. Women, however, were ignored because, well…we don’t have the kind of proof of orgasm men do (tell Meg Ryan that). Women were hardly sexually educated upon marriage or made to be pleased by their men, so for a woman to have an orgasm (probably the first in her lifetime) during sleep was horrifying and shameful. Within that context, we can assume that man took to the church's explanation so they were no longer responsible for sexual feelings without procreation, i.e. "it was the incubus's fault." The church helped to create an incubus and a succubus because only demons can make you feel good. I won’t even get into why their God had to be punishing and their demons pleasurable…

Sleep states usually run the gamut from early in the sleep state when anxiety is expressed in dreams such as the running from something unseen, then a phase of working out problems and troubleshooting your life such as trying to find your way home from an unfamiliar place. Usually in the early morning hours, the sexually aroused state kicks in during REM sleep, hence the morning engorgement or erection and visitation by the “incubus” or “succubus.” You might even notice that if you sleep in on the weekend, you might wake from a very impassioned dream.

I’ve had people approach me after talks about ghost hunting shyly and sometimes boldly asking me,

“Can a spirit have sex with you?”

Hmm… My answer is always, “there’s no need for a spirit look for sexual pleasure, without a body it provides no satisfaction.” But, inside I’m thinking, “it depends on what you think a spirit is. If it’s something in the dream world, huh, yeah.” That’s the noncorporeal world, but that’s not to say it’s a world of demons and spirits, it’s simply a mind-fabricated and some say soul-fabricated state of being, sort of hallucinogenic.

My regular readers know by now that I’m pretty bawdy and always upfront about such subjects. I certainly couldn’t write erotica if I weren’t a rather earthy person, so hope ya’all aren’t blushing but maybe learning some things that might relieve your consciences or perhaps teach you more about folklore and the time and place in which it gives birth. The incubus and the succubus are only symbols of repression, fear, and symbols to direct and control people. Should you awaken in a rather juicy mood, enjoy that moment between REM and awake state, it rarely occurs with such rewarding chemistry.

There is a set of parasomnias that also includes sex in one's sleep - like sleep walking, but well, um, sleep humping.

On a side note about this fun subject, a really awesome book “Incubus” was written by Ray Russell and made into a fairly interesting and moody 1981 movie that was missed by most audiences and is one of my classic fav’s for its brooding quality. It could have honestly been a lot better as a movie, but there were no doubt some rating issues with it. I’d love to see someone make an honest stab at remaking it and that’s saying a lot since I usually hate remakes. Another movie dealing with this concept was “The Entity” involving forcible rape of a woman by a ghost in a “supposedly” true story of some fame in the old-time ghost hunting circles. The movie “The Legend of Hell House” also involved some demon sex (consensual, no less). “The Haunting Passion” was a very intriguing romantic ghostly sex made-for-tv movie of 1983 starring Jane Seymour as a lonely housewife in a scary old house. I personally liked it a lot, but I’m crazy for anything with a romantic attitude and it did have a dark and interesting side. You just knew I’d have to direct you to some movies…