How Make Horror Short Films For Family and Friends or YouTube 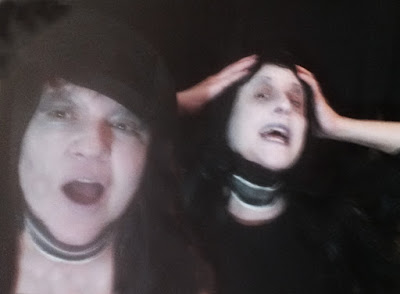 It's such a great time of the year to use your imagination and create easy cellphone videos to upload to YouTube or share with family, friends, or Facebook.
Here's some ideas -
With some scary background music and a short dimly-lit video piece that reveals something scary, you have a serious bite of terror -

You can find lots of free scary sound effects and music at places like FreeSoundEffects.

Some phones have great editing capabilities so play with those first. You can even use the app for audio recorder and make your own sounds or voice to use. If you aren't good at editing, do the cheater's way - play the music on your laptop or other device while filming. That's how I did the video above.

I use a free video editor called Open Shot Video Editor. It's pretty intuitive, and believe me I'm a horrible editor. I just hit FILE and then NEW PROJECT and then under FILE I click on IMPORT FILES and choose pics or videos. I scroll down to Track 1 and drag the pics or video from the left sidebar and put them down below. I also import the music and drag it to Track 2 so it lines up with track 1. You might have to click and drag the end of the music to make it fit the size of the photos. When it's time to save, I go to FILE and EXPORT VIDEO and I pick what folder in the computer I want to save it to, name it, and click "export video" below.

The technique above is a great one for those who aren't video savvy but are creative.

If you want a storyline, here's some of my shorts -


In the video above, I had no dialogue planned out, just the thought the setting was creepy as my friend's yard was decorated for Halloween and we had a mask, so I thought it'd be cool to do something like a live video vibe of someone talking about their housesitting job and a cemetery nearby and then at the end, have my friend in the mask turn around. It was one take and just made it up as I went along.

In the video above, I set up the doll with strings and a knife and I was taking it tongue in cheek as my readers know Dale the Doll as a worrisome sidekick of the blog for years. I teemed it with the concept of a storm (had a creepy light and thunder sounds playing in background) and a woman talking to her boyfriend on Skype when he sees something in the room with her. I literally did one take. This was off the cuff. I really enjoy adlib.

Don't underestimate the power of a mask and some humor. Above, my best friend and I pondered how Michael Myers and Jason Voorhes might go to work on Halloween night. It was off the cuff and thankfully a total win!

Be creative, involve the kids or grandkids.