Halloween: How to Create Subtle Terror 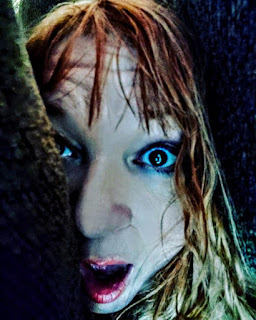 I came into my teens during the peak of slasher films so you'd think they'd be special to me. They were so formulaic and I never felt torture and guts were particularly scary, just repulsive.

What is so sad is that the strengths of storytelling, atmosphere, good haunting score, and a semi-dark situation can create so much terror.

Instead of showing the entire storyline, how about hiding a good deal so the audience fills in the blanks with the thing that most terrorizes them?

Some great movies were based on mood and atmosphere without the need for slashing teenagers and creating blood baths.

If you want to get back to the basics of a good haunt, there are some ways to create terror in your Halloween decor. 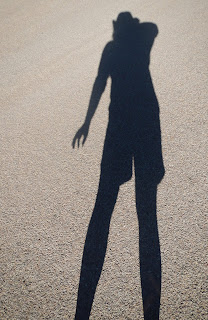 Have you ever noticed when the sun is almost set, your shadow is super long? Rather imposing!

If we are going to reuse items or repurpose them, consider the use of cardboard. Most of us have a lot from having deliveries, but it's easy to find folks who have it that you know or even on NextDoor.Com from neighbors.

Make some cut-out Slender Men with hats and stand them up with a stake around the edge of the house so you can plant a floodlight behind them on the ground, to cast even longer shadows.

A nice water pattern light on the front porch, casting water light patterns all over the place and some foghorn sounds, perhaps the sound of Stevie Wayne from "The Fog" calling out over the water warning sailors, a gentle fan, some creeping fog.... What a set up!

If you were to watch any horror movie without the creepy score, it really wouldn't do much for you. Sound effects like the sound of digging creates novelty. You set up a graveyard, you hear a grave digger working.... Someone walks up to your porch with fake crows everywhere and then hear squawking. You see flashing light and hear thunder and the heavy sounds of rain while the sprinkler is hidden....

Consider sounds to be some of the best tools you can utilize.

One Halloween I set up the front window near the front door with tons of dolls staring out, put a flashing lightning light on them, played occasional thunder with the sound of little kids chanting.

The children stopped and studied it with terror and curiosity, some even forgetting to ring the doorbell.

One year, I collected tons of dead leaves and put them near the front door and walkway. The kids had to crunch through them, combined with the strong scent of pumpkin and mushroom and it was autumn!

Fans, especially if poised from different locations, creating a whirlwind feel and the use of fog, especially the ground fog, are super effective in making one feel as if they entered a portal. In fact, constructing a portal entrance to this weird world could make things even more wacky. Taking cardboard and cutting it into board shapes and painting it and then attaching it to the porch crooked so everything feels a bit funhouse, is another cool idea.

The key to adding suspense is in what people DON'T see, so no animated zombies. But, what if there was something moving around in the bushes and moaning?

It's all about what's in the shadows, the unknown story, the novel mix - why are there doll heads on sticks??? It's about the senses from smell and sound to wind and fog.