Cryptozoology Awakening in Papua, New Guinea - and All Across the South Pacific Islands! 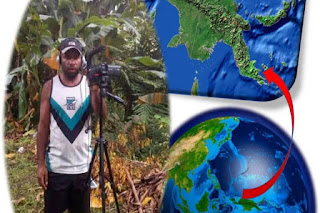 ASSISTANCE NEEDED!
Rex Yapi has been a cryptid researcher out in the field for many years, studying the flying Pterosaur, also known as the Ropen, in Papua New Guinea.
After Rex witnessed a Ropen on Umboi Island, it sparked his interest in cryptid research and to better understand his world around him. He has been out in the wilds and jungles of Papua New Guinea since that day!
The Independent State of Papua New Guinea (PNG) is a sovereign state in Oceania, in the southwestern Pacific, and encompasses the eastern half of the island of New Guinea and its offshore islands in Melanesia. It is the world's third largest island country with 178,700 square miles (462,840 sq km) and 75% of that area consists of virgin, dense and unexploited tropical rainforests. It is a country of immense cultural and biological diversity, and one of the world's least explored, both culturally and geographically. The shores have magnificent beaches and coral reefs, while the inlands have active volcanoes, 14,793 foot tall Mt. Wilhelm, dense rainforests, gorgeous Lake Kutubu, and hiking routes like the Kokoda Trail. Papua New Guinea is one of the few regions close to the equator that regularly experience snowfall, which occurs in the most elevated parts of the mainland. There are even equatorial glaciers!
With 12 years of research under his belt now and despite many set backs, mostly with filming equipment failures due to the brutal environments, Rex has never given up his pursuit of the truth. In 2020, he formed his own group, the Papua New Guinea Cryptid Research Organization (PNGCRO), with a vision to continue the research for all cryptids reported to thrive in PNG based on eyewitness accounts of Bigfoot (locally called Lama Ango and Tono Ango), Thylacines, Pterodactyl and many others. He is only one single person struggling to introduce and promote cryptozoological research in a remote land that has almost 9 million people that speak over 800 languages!
HOW CAN WE HELP?
Possessing only a single camcorder that developed many issues and problems through the years, he has been struggling. Cryptid research is not known or presently carried out in his country, including all across the small Pacific Island nations. He is the very first indigenous citizen to introduce this expansive research concept of cryptozoology to this region.
How can he be expected to penetrate this part of the world with a single run down camcorder? Rex is forming a team to gain access across all of the tropical frontiers in Papua New Guinea. He is desperately in need, and urgently requires, support with acquiring the following equipment (new or used, as long as it is in working condition):
○ Drone - DJI Phantom 3 Professional ○ Professional SLR camera ○ Camcorder - Sony HXR-MC2500 Shoulder Mount AVCHD Camcorder ○ Night vision scope or binocular ○ Trail cameras ○ GoPro with case/accessories ○ Jungle or hiking boots - Red Wing Size 8.5 ○ Waterproof gear and raincoats ○ Laptop ○ Memory cards ○ Mobile phone ○ GPS
Rex also has a GoFundMe called 'Cryptids Research in Papua New Guinea, SW Pacific organised by Dan Walck'.
https://www.gofundme.com/f/cryptids-research-in-papua-new-guinea-sw-pacific?utm_source=customer&utm_campaign=p_cp+share-sheet&utm_medium=copy_link-tip
DIRECT CONTACT Rex Yapi C/O Gavin Mai P.O. Box 290 Lae City Postal Code: 411 Morobe Papua New Guinea Mobile: +675 75426012 WhatsApp: +675 75426012 Email: rexyapi86@gmail.com
Let's get this man equipped and back out in the field!
Thank you!!