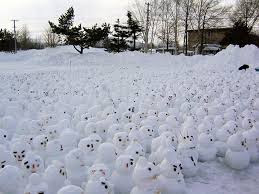 Wintry snow and horror plots go well together. Snow is isolating and settings are bloodless and barren. Here's my top 10 icy wintry horror movies to watch this season -

*Descriptions thanks to IMDB, my go-to movie-knowledge site.*

30 Days of Night (2007)
After an Alaskan town is plunged into darkness for a month, it is attacked by a bloodthirsty gang of vampires.

The Shining (1980)
A family heads to an isolated hotel for the winter where an evil and spiritual presence influences the father into violence, while his psychic son sees horrific forebodings from the past and of the future.

Let the Right One In (2008)
Oskar, an overlooked and bullied boy, finds love and revenge through Eli, a beautiful but peculiar girl.

Krampus (2015)A boy who has a bad Christmas ends up accidentally summoning a festive demon to his family home.

Dead Snow (2009)
A ski vacation turns horrific for a group of medical students, as they find themselves confronted by an unimaginable menace: Nazi zombies.

The Thing (1982)
Scientists in the Antarctic are confronted by a shape-shifting alien that assumes the appearance of the people it kills. (I personally prefer "The Thing From Another World" version from the 1950s)

Trollhunter (2010)
A group of students investigates a series of mysterious bear killings, but learns that there are much more dangerous things going on. They start to follow a mysterious hunter, learning that he is actually a troll hunter.

Wind Chill (2007)
Two college students share a ride home for the holidays, but when they break down on a deserted stretch of road, they are preyed upon by the ghosts of people who have died there.

Ravenous (1999)
Captain John Boyd's promotion stations him at a fort where a rescued man tells a disturbing tale of cannibalism.