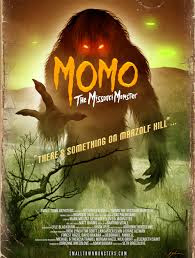 I got to preview this flick and I HIGHLY recommend it. It has a campy 70s grindhouse feel - well done, mixed with informative narrative. This is such a great presentation.

Wadsworth, OH -- Small Town Monsters has announced the September 20th DVD and VOD release of Seth Breedlove's docudrama MOMO: The Missouri Monster. The latest title to crawl forth from the production powerhouse behind last year's best-selling documentary On the Trail of Bigfoot, MOMO: The Missouri Monster seeks to tell the true, and truly strange story of the Missouri Monster. The hair-covered, three-toed monstrosity was said to have prowled the forests of Star Hill, near Louisiana, Missouri during the summer of 1972 where it was spotted by terrified citizens for weeks. The film will be available nationwide on DVD, as well as Vimeo OnDemand, Amazon Instant Video, and VIDI Space.

The case gained national media attention during the '70s and remains one of the largest tourist draws for the tiny town on the banks of the Mississippi River. The latest release from Small Town Monsters and director Seth Breedlove, MOMO: The Missouri Monster is told in both narrative and documentary form. The narrative sections appear as a lost b-movie from the 1970s, inspired by Breedlove's lifelong fascination with grindhouse movies and creature features. The horror film depicts the widely accepted details of the MOMO legend and is eventually contradicted and corrected by the actual survivors who lived through the events. Breedlove describes MOMO: The Missouri Monster as "Rashomon meets Creature from Black Lake or The Legend of Boggy Creek".

Ahead of the national video release, a midnight premiere is scheduled at the Kentucky Theater in Lexington, Kentucky on Friday, September 6th with cast and crew in attendance. The premiere will coincide with Cryptid-Con, a cryptozoology and paranormal convention celebrating its third year and featuring a number of renowned authors, television personalities, and speakers. On Friday, September 13th, the Canton Palace Theatre in Canton, OH will play host to the Ohio Premiere of MOMO with cast and crew in attendance. Finally, on September 20th, as MOMO hits audiences nationwide, the Missouri Monster will storm the State Theater in Point Pleasant, WV as part of the kickoff for the annual Mothman Festival.