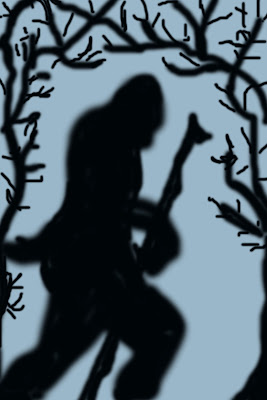 Skeptic: What about Bigfoot's bones? If they die, they have to leave bones.
Typical researcher: The animals in the forest eat their flesh, scatter their bones.
A brave researcher: They bury their dead.
Me the realist: I see no reason they don't cannibalize their kin.

I have reasons for seeing it this way and once you see the supporting evidence, you may go into a new category - realist.

My concept began with the red-haired giants of Lovelock Cave. These are the ones from long ago that the Paiutes report a legend of their cannibalism. Around the entire world, Native People have almost identical legends of cannibalistic giants, yet anthropologists disregard the notion.

It is interesting to note that around the world we have concepts of God and yet I dare an anthropologist to dispute this as just a Native Legend.

So, there were reportedly a people who were tall and had cannibalistic tendencies. This caused many wars with the Native People and eventually battles in which many giants were killed off and others ran for the hills realizing they were outnumbered. The themes are in nearly every culture.

If a people who thought nothing of cannibalism as an option were forced into hiding, knowing that they will be killed for acting on those impulses, you might have a forest people who are cagey around our kind.

Whether the practice of cannibalism was practical - hunger and a carnivorous not omnivorous tendency (like a lion) or a spiritual practice of taking on the enemy's power (think of the Highlander lopping off heads), we may never know.

But, evidence of endocannibalism (eating one's own relatives) in Homo sapiens past and culture are shown around the world, not just New Guinea, but Africa, Easter Island, the pueblo cliff dwellers of the United States Southwest, Asia, and ancient man.

If you were a secreted people and you knew that you cannot leave remains, perhaps your very spiritual nature is to consume the spirits of totems, like deer and bear and other, then you might carry a belief that consuming your family puts their spirit in you.

How about a gene adaptation that keeps those who cannibalize protected from Kuru Disease (Laughing Disease) that occurs from eating brain proteins of your own kind?

It was the Fore People of New Guinea that helped us understand something intriguing - the more they ate their dead's brains, the more resistant they were to the prions that created Kuru Disease. Adaptations like that in a population who continued to eat their dead might make this a feasible practice through generations.

LINK: After years of eating brains, some Fore have developed a genetic resistance to the molecule that causes several fatal brain diseases, including kuru, mad cow disease and some cases of dementia...When the researchers looked at the part of the genome that encodes prion-manufacturing proteins, they found something completely unprecedented. Where humans and every other vertebrate animal in the world have an amino acid called glycine, the resistant Fore had a different amino acid, valine.

Do Bigfoot consume their dead?