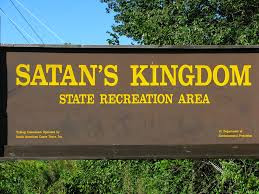 Sometimes, funny-named towns create a chuckle and look fun on a mailing station stamp, but upon occasion a town has a name that is spooky. They make you wonder, why did they name it this? Here's just some in the US.

Reasons why? Found on Wikipedia.

Bad Axe, Michigan
The city's unusual name dates to the time of its settlement. While surveying the first state road through the Huron County wilderness in 1861, Rudolph Papst and George Willis Pack made camp at the future site of the city and found a much-used and badly damaged axe. At Pack's suggestion, Papst used the name “Bad Axe Camp” in the minutes of the survey and on a sign he placed along the main trail. The first post office in Bad Axe was established in 1870.

Slaughter Beach, DE
Slaughter Beach was founded in 1681 and incorporated in 1931. There are at least three stories of where the town's name came from: The first is that it was named after William Slaughter, a local postmaster in the mid-19th century. The second story claims “the name came from the horseshoe crabs that wash up on shore and die each year. They come near shore to shallow water to lay their eggs and the low tide strands them leaving them to die, thus the "slaughter." The third story, and the most contested source of the town's name, stems from a local legend which tells of a man named Brabant who, in the mid-18th century, "slaughtered" several indigenous inhabitants by cannon in order to prevent an impending massacre.In 2018, PETA wrote to the mayor and followed up with a press release requesting the town change its name to "Sanctuary Beach" and offered to help pay for new signage if the name was adopted.

Frankenstein, Missouri
The community most likely derives its name from Godfried Franken, a pioneer citizen.


Hell, Michigan
There are two theories for the origin of Hell's name. The first is that a pair of German travelers stepped out of a stagecoach one sunny afternoon in the 1830s, and one said to the other, "So schön hell!" (translated as, "So beautifully bright!") Their comments were overheard by some locals and the name stuck. Soon after Michigan gained statehood, George Reeves was asked what he thought the town he helped settle should be called and replied "I don't care. You can name it Hell for all I care." The name became official on October 13, 1841. The second theory is tied to the "hell-like" conditions encountered by early explorers including mosquitoes, thick forest cover, and extensive wetlands. It has frequently been noted on lists of unusual place names.

Seven Devils, NC
Seven Devils was named around 1965 when its founders wanted a unique name to attract visitors. Seven Devils was decided upon based on a combination of seven rocky peaks and local history of seven brothers, who in the 19th century were so cantankerous and willing to fight that they were jokingly referred to as the seven devils.

Satan's Kingdom, Massachusetts
It was named Satan's Kingdom because when settlers came into the area in the 1670s during King Philip's War, there were reportedly Native American villagers there who defended their land. It was attacked numerous times along with Deerfield. It was also known for its rough terrain and wildlife, preventing settler-colonialists from settling its potentially dangerous grounds.