It would seem that we are long overdue to re-open the legends told by Native Americans who arrived to this land, more than likely it would seem, finding a race of man already here.

Many of their legends portray these encounters from the Paiutes who spoke of red-haired giants at Lovelock Cave to the Lenni Lenape telling of beating a giant race and running their remaining members down the Mississippi. The Natives in Wisconsin tell of the mines being mined by the white-skinned people who were there prior to them.

Now, let's look at another legend passed down by the tribes of the Mississippi Valley.

From the very illuminating book Records of Ancient Races in the Mississippi Valley by William McAdams, Richard Ellsworth Call, 1887.

The Piasa Bird was created by the mysterious race of people known as the Moundbuilders of unknown American Aboriginal origins.  The Piasa pictograph was on a high bluff above the City of Alton, on the Mississippi River.

John Russell, a professor at the local college, had gotten a story from the local Native Americans about the giant pictograph.  Supposedly, high on the bluff where no human could reach, this giant pictogram was placed.

It was said by the local tribes that many thousands of moons ago, when the giant mastodons were still stomping around the lush green earth there, there existed a bird of such extreme dimensions that it could carry off a full-grown deer with his talons.  It lived inside a cave. (reminds me of the "dino" bones from the cave - below)

After having a taste of human flesh, it continued to carry off the people and eat them. In desperation, the leader went away and fasted and thought for a time and came back with a solution. They were to put one of the own out there in the prairie in full view for the Piasa to come in and then they would shoot it down.

In memory of this event, the tribe cut the bird into the stone to never forget their losses and their victory.

Russell tells that in 1836, he climbed the bluffs to a cave. It was extremely hard to reach, but when he went inside, he found thousands and thousands of bones. The cave was 20-30 feet long and they dug 3-4 feet deep and still only found bones.

Blog author note **As an interesting aside, throughout that region and into Tennessee, caves were found filled with human bones that appeared to have been split lengthwise and marrow removed, showing cannibalism perhaps by ancient giant race, so the finding of so many bones in a cave might not have had a thing to do with a bird, but with giants**

Strip miners removed the rock face at one time and when officials decided to repaint the bird, they put it in a new location (reported as a few hundred yards away) and more stylized than the original.

Oddly, the actual supposed cave of this lair has yet to be found, though there are plenty of caves, but massive mining in the area has ruined much of what could have been entrances.

There is a constant and ongoing debate about John Russell's legend telling. Many believe it is exaggeration and romance, and downright fiction. It gets more murky when folks with commentary such as this one (below) suggest changing the very style of the bird.

Native Americana it is not, but the bluff monster has become such an integral part of the city's history and-folklore that it must be preserved. The creature should be painted anew on our bluffs, but I would strongly recommend that this latest representation be based on Marquette's 1673 description of the original "two painted monsters," a description that emphatically included no mention of wings. An excellent model for this new painting would be the figure depicted on a 1678 map titled "The Explorations of Louis Jolliet" that portrays a bizarre wingless creature somewhat resembling panther. John Dunphy 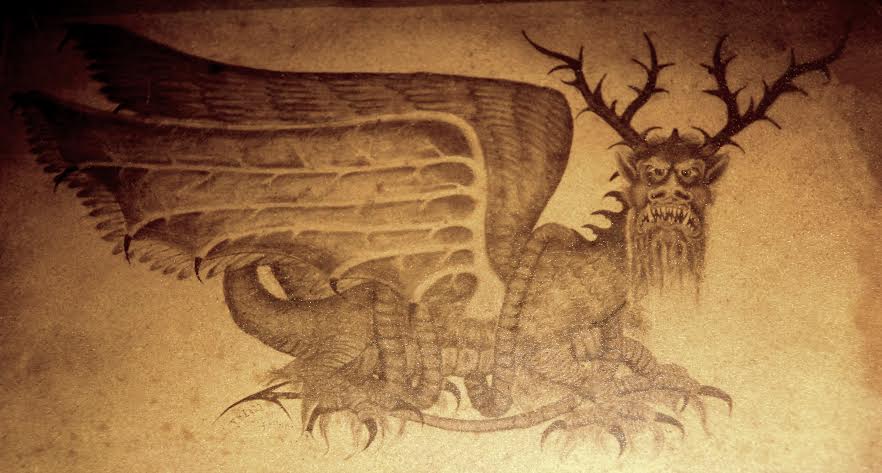 Blog author note:  **As an interesting aside, I was very lucky to know someone who photographed an original drawing (above) made of the "monster." At the bottom of the art work is written ""Piasa Drawn by T.J. Ladd 1876 in Holt, Ill."**

(above: 1876 drawing on left - modern day rendition on right)

Making it even murkier yet, in the book "Records of Ancient Races in the Mississippi Valley," they speak of a drawing that came into their hands that resembled what early explorer, Marquette, had reported, "...a spirited pen and ink drawing 12 inches by 15 inches in size, and purporting to represent the ancient painting. It is inscribed `made by Wm Dennis, April 3d, 1825'"  Apparently there are generations of different sketches that were made trying to preserve the mural.

It was reported that the Indians when they had firearms, would systematically shoot at the mural as they went by it, defacing it a great deal by the 1800s and, by the time of the Civil War, it was gone to lime mining.

In Tennessee there were similar murals found and they were confused by how they were painted on a bluff where no human could reach. Assumptions were made that they were descended by rope to place them there. It was obviously a popular practice in Ancient America to create animal effigies on the ground and in murals, as well as carvings and decorative items, pipes and the like.

What this Piasa bird is based upon (what I refer to as the "kernel" of truth in a legend) is that something was eating the tribe members and the legend was attributed to a bird that had a taste for human flesh. A cave of bones was found. And, we know there were giants there who tended to practice cannibalism and leave the evidence within caves. So, in fact, the Piasa bird could be a legendary portrayal of a very harsh reality for the natives.  As well, the Native people might have found a mural already painted there and came to attribute the giants who put it up as the Clan of the dragon-like cannibals. The bird might have been used to represent the giants who devoured man.


*UPDATE: An interesting find - researchers discovered a Neanderthal child (LINK) who was eaten by a huge bird 115,000 years ago. Kind of late to be still having pterydactls around. So, what was it?