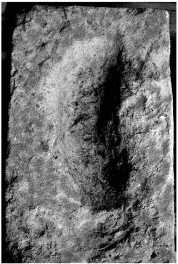 The Carson City ancient foot trackway dates around 50,000 years old and showed what appeared to be giant human footprints.


During sandstone quarrying operations in the late 1870's on the grounds of Nevada State Prison, in Carson City, a variety of animal tracks were found, including those of mammoth, bison, horse, deer, wolf, birds, as well as some large oblong tracks of uncertain origin. In 1882, sheriff W. J. Hanks of Storey County brought the find to the attention of H. W. Harkness of the California Academy of Sciences in San Francisco. Harkness identified the track beds as late Pliocene in age (approx. 2 million years old) and interpreted the problematic tracks as giant human footprints (Davis, 1912). Other geologists identified the prints as being near the Pliocene-Quaternary border, which would place them at about 1.6 million years by conventional geology, although Stock (1936) implied an age of only 50,000 years.

The prints in question were approximately 18 to 21 inches long and 8 to 9 inches wide. Though bearing a superficial resemblance to human prints, the tracks lacked obvious digit impressions and normal heel-ball-arch bottom contours typically found in human prints--features that Harkness explained by suggesting the giant trackmaker might have worn sandals. However, besides the enormous size and lack of distinct human features, the tracks also showed an unusual gait pattern, with a wide trackway gauge of 18 to 19 inches but very short average pace length (for the size of the prints) of only about 2 and a half feet. 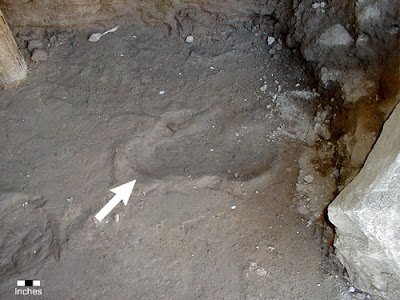 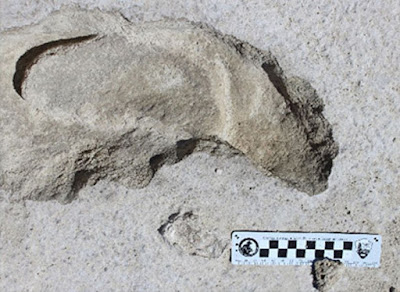 Considering these sandals (below) were found in Lovelock Cave, our culprit would appear to be a large human walking around Lake Lohontan about 50,000 years ago. 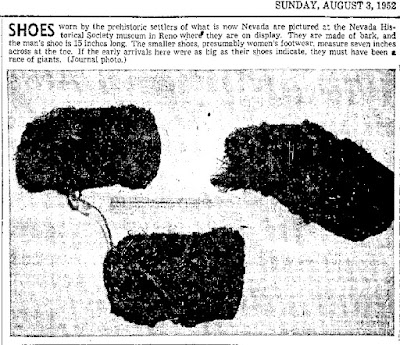