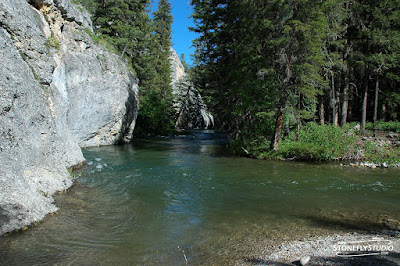 *This is an account conveyed to me by a researcher/explorer of an experience he had at Yogo Creek in Montana, June 2017*

I was in Montana for filming an adventure type show for a producer out of Helena. I had been filmed fishing, prospecting for Eldorado Bar sapphires, prospecting for gold and pursuing Bigfoot. Growing tired of a crowd being a solo type individual I wanted a break, so I headed out to Yogo Creek around Sapphire Village to try my hand at what is considered the world’s most valuable sapphires. For three days I had worn my fingertips raw panning for sapphires with no success and decided I needed a day of fishing.

I had camped at a remote site along Yogo Creek, so I started at my camp and worked my way upstream with 4# spinning tackle and the smallest Panther Martin spinner available and immediately started catching brook trout along with the odd brown or rainbow. The larger brook trout along with some brown trout and rainbow trout I killed by snapping their necks, then field dressing them I hung them by the mouth on small branches to pick up on my way back downstream, so I didn’t have to carry them along.

I followed the creek upstream fishing as I went and eating the flowering tops of wild garlic and munching tender dandelion leaves. I thought I had seen movement up ahead and thinking it might be a bear I got into the stream and worked my way forward hand on my pistol and there on a gravel bar in the middle of the creek was a freshly made classic Bigfoot track where this thing had crossed to get into the steep terrain and dark timber on the mountain side of the stream. There was still muddy water in the track as it was filling in with seeping water.

I was shocked and even blurted out loud with no one to hear me, “that’s a damn Bigfoot print.” I wear a size 14W boot and weigh 225 pounds, my print was no where near as big as that one and try as I might even jumping up and down I couldn’t press my boot into the gravel bar anywhere near as deep as that print was.

There was no phone signal in the area, so I had left my phone back at the camp in my vehicle and was kicking myself for not being able to take a photo. I spent quite a while scanning the timber to see if I could see what made the track and then continued upstream fishing for another couple of miles.

On the way back to camp I began to gather the fish I had left hanging and when I returned to the area where I had seen the track to pick up a fat brook trout and two browns from a branch I noticed that there were only two fish on the branch instead of three and the branch was still bent around and secured sort of like a safety pin under another branch just like I had left it. The middle-sized fish a brown was missing and the other two were rearranged on the branch. I had hung them with the largest fish, a brown closest to the tree followed by the middle size fish, the other brown and then the brookie on the end. Now, the brookie was closest to the tree and the big brown on the outside with the middle-sized fish now missing.

As is normally the case when I hang a trout, the necks are broken for a quick and humane kill so if an animal or bird pulls on the body it normally detaches the body from the head with the tough mouth of the fish holding and the pull on the trout separating at the break in the neck. The head is normally left on the branch secure with the branch through the mouth. Something or somebody had clearly taken the fish and rearranged the order they were on the branch and the body is carried off to be eaten.

I searched for several miles up and down the creek looking for another camp to see if I could lay that off on a human but there were no other occupied camps until about 12 miles upstream. I’m not saying it was a Bigfoot that took my fish or left the track, although the track was classic what I believe to be Bigfoot and obviously made by something far heavier and with a far larger foot than myself.