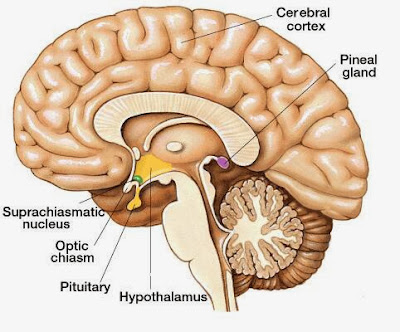 Many skeptics utilize the term "pseudoscience" when referring to anything unexplained and how researchers go about explaining it. Let's have a look at the definition of "science."

SCIENCE: The intellectual and practical activity encompassing the systematic study of the structure and behavior of the physical and natural world through observation and experiment.

Now, let's utilize science to better explain some extraordinary capabilities and their effects -


A pine cone-shaped, pea-sized gland made of calcium carbonate within the brain - deep behind the root of the nose and floating in cerebrospinal fluid. It is often referred to as the "human antenna" or "third eye." The gland has many known purposes and some rather vague ones. It produces melatonin, the hormone that allows you to sleep - and it is stimulated by darkness. The gland is our master clock that regulates our circadian rhythms. The gland is our internal compass, our keeper of seasonal shifts and time. And some say it is the seat of our soul.


Researcher Serena Roney-Dougal has gathered together some of the most compelling research into the biological means by which the geomagnetic flux of the earth might cause the pineal gland to allow us to psychically ‘tune in.'


It is believed, as well, that a bit of magnetite within the gland gives us our internal compass and could be incited to move about during a blast of infrasound (sound below our human audible hearing, but felt viscerally by our bodies), and stimulate that gland. (more on that below)


The gland also has the capability of releasing hallucinogenic type chemicals. It regulates serotonin which helps us to regulate mood and it also promotes chemicals that allow us dream and go into paralysis so we don't act out those dreams. It helps us to shift hormones for the different phases of dream sleep. In fact, this might also explain why my fantastic encounters with "greys" occurred in my room during sleep phases. A shift in sleep state could activate the ability to "hallucinate" (as we do in dreams) athough that would not explain the similar appearance of these beings with each encounter throughout cultures. It might be explained by us being able to see a realm we don't see normally - a portal to another world of sorts and its people whose brains are evolved to be able to see our realm even if we can't see theirs in waking hours.


Because it can be affected by geomagnetic changes, the pineal gland can give you vivid dreams on nights of geomagnetic storms caused by solar flares. It's believed it can also help to activate psychic activity and interestingly, 100% of my active ghost hunting cases occurred on nights of strong geomagnetic storms. So, are our perceptions of ghosts part of the side effects of the gland or, more interestingly, was the gland put there so that we would have a communication vehicle with higher power, otherwordlly beings?


Now, let's move from talking about the pineal gland to something more terrestrial - Bigfoot. I've listened to lots of infrasound calls ("blasts") from the forest and when most people either vomit, feel queasy, get confused, or have headaches, I get vivid technicolor visions - the ones I get on nights of dreaming during geomagnetic storms. It was because of this unusual reaction that was very much like the most powerful psychic visions, that I realized the pineal gland was being affected by this frequency.


I've discussed before on here the subject of infrasound and Bigfoot. I have zero doubt they do use it. I've not only experienced it numerous times, but given their very size, it's entirely feasible. Even a human being makes infrasound - a man with exceptionally long vocal chords.

What might Bigfoot be able to do if they directed the use of infrasound? Stop you in your tracks? Confuse you or make you get lost? Make you forget the entire encounter? Make you see something other than what is there? Make you drowsy or weak, even paralyzed? Make you smell, see and hear things that aren't there? Give you dream-like images? Make you fall asleep? Make you physically uncomfortable? Give you deja vu? Stimulate visions to show you something? Send you visual and auditory messages in your mind? Make you choose one path over another, and perhaps even more we haven't considered?


If infrasound vibrated the cerebrospinal fluid around the pineal gland and caused the magnetite within to move, then it would stimulate the gland to do all kinds of primitive and latent things. Want to talk about living in the matrix -- what if this gland makes it possible for us to have a reality, but only a contained reality? The entire reality is not allowed to be viewed by us until we move from this physical form to the next reality. People with near-death experiences describe the other side as "the real world" and this as "the fake world." Is that the perception when one steps out of the limited world of 5 senses we live in? Why is that knowledge being kept from us now? Why not let us access all that gland could show us? Perhaps because in our physical form we could not engage with the universe - being limited by our 3D form and the confines of our physical reality of objects being "solid." In fact, this is why we are paralyzed as we sleep - so we don't act out our dreams and get hurt.


Want to go a bit further? Pineal gland is made of calcium carbonate, another critical element in the workings of the brain is lithium salts. When looking up how they make orange-red lights for fireworks -- the same color light associated with alien encounters - it's (drum roll) calcium and lithium. How about Coral Castle in Florida? A tiny slight man builds an amazing monument out of coral stone and no one knows how he did it.


I've talked a few times about Bigfoot and his size and hairiness being a reflection of possible evolutionary changes in the size of his pituitary gland and its function, releasing hormones that make him taller and more hairy, but what if he had no pineal gland or perhaps one that did not put out melatonin? Would this make him not have the desire to sleep? What if that was combined with night vision? We know that human eyes let in light and when they perceive dark, the pineal gland starts putting out melatonin to make us tired. So, if Bigfoot had night vision, would he not be flooded with melatonin and then be considered a human who is nocturnal? Reports of eye shine in the dark and Bigfoot reacting to bright lights as if in pain, makes sense.

Is it possible that Bigfoot has the ability to make infrasound? It is probable. Why? We have a human who can make infrasound and doctors have explained him as having "extra long" vocal chords. If length of vocal chords is a matter, then might a 7-9 foot tall human be capable?

It is interesting to note that we mammals all have this strange sleep/dream cycle. It is as if it is not enough that our bodies rest, but our minds must work out puzzles, view worlds we don't know, situations we have never been in with ethereal beings we don't know in person. Are we visiting other realms or parallel worlds in our dreams? If so, might the pineal gland be a kind of vehicle to the other worlds?

And what if we are wide awake and our pineal gland is awakened by infrasound? Would we wander around aimlessly and "come-to" having no idea how we got where we are? Might we have amnesia of events that occurred before the infrasound blast so that we would not recall encounters? Could we hallucinate or possibly visible see something from another world? Could it create a subliminal message to "take the path to the right" versus straight ahead so we leave the forest beings alone?

Any way we view it, the pineal gland and infrasound are two mysteries that, when brought together could create something stunning in response.

More Info:
My paper on The Evolution of Bigfoot