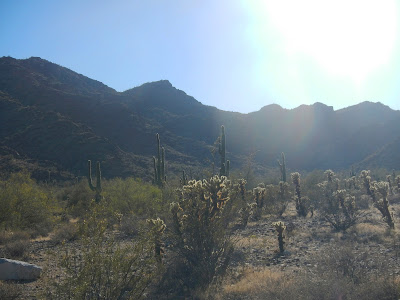 A recent trek to the White Tank Mountains in Northwestern Phoenix area proved to be enlightening and intriguing. I had heard about this range of mountains for some time and in my mind imagined them to be a mirror image of South Mountain, another metropolitan range in Phoenix that also housed the ancient HoHoKam tribe that went missing almost a thousand years ago.
The mountains have the most interesting and gorgeous geology.

LINK:  Metamorphic units- Several types of metamorphic rocks are found in the range, including quartzo-feldspathic gneiss (figure 3), amphibolitic gneiss, and heavily foliated rocks of granitic, and dioritic origin. These metamorphics are strongly banded on both cm and meter scale. The likely protolith of these units is the Union Hills and Alder Groups, which are a series of volcanic (both basaltic and andesitic) and volcanic clastic rocks found in the Transition Zone.

Foliated tonalitic and granodioritc plutons- Foliated intrusive rocks are also found to the north and south of the metamorphics. Though these plutons can contain compositional banding and intense foliation, they are distinguished by their mineralogy and grain size (which is generally coarser than the metamorphics). These bodies appear to have intruded either during or between foliation forming events as tabular sheets that are elongate along the strike of the S1 foliation.

For all the fancy rock talk, it can be said by this visitor that the rock in the mountains feels both volcanic and varied. Some of the rock has broken open to reveal layers and banding, some of the rock is a bleached white, and all of it is gorgeous!

But, the mountains also house lots of ancient petroglyphs drawn by the ancient HoHoKam tribe that resided in the Greater Phoenix area and outskirts. They were a tribe that developed a massive canal system. Today, we don't have a clear understanding of what happened to these people. Perhaps they died off, perhaps they were assimilated into other tribes when water was harder to obtain. 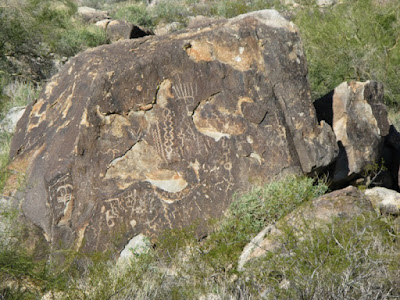 LINK:  In the northeast portion of the White Tank Mountains was a natural basin or tank that held water year round. Named the “White Tank” for the white granite cliffs surrounding it, this large watering hole appears on maps and in journals as an important watering place from 1863 to 1895.

It has an interesting geology, an interesting Native history, and a gorgeous appearance, but the White Tank Mountains also have reports of other rather unusual happenings like UFOs and Bigfoot sightings.

LINK: Here is just one story I found: “It was back in 1993 or 1994 when three high school boys decided to take a late night drive in the desert. They ended up on the dirt roads of the White Tanks Mountains near the park entrance to take a break. It must have been around 11:00 pm when they began hearing lots of commotion amongst the bushes. They blew it off as being a small animal, perhaps a rabbit. The movement continued which had one of the boys scratching his head. He told his friends that he had been hunting all his life and never experienced any animal circling him in the woods, even more so in the desert. The three boys started to get nervous and scared. They jumped out of the jeep with flashlights in hand shining them into the dark desert. As the noise got closer in front of their vehicle, the flashlights brightness caught a large erect animal standing behind a 6 foot tall Creosote bush. The creature was still moving, and looked at them as it emerged from behind the bush. With only two strides, it crossed the road and disappeared in the darkness of the desert. The three boys were not sure exactly what they saw but they all describe the animal as being 7-8 feet tall, walking on two legs, massive shoulders with two-toned tan and brown hair. The hair on the creature was nothing like a dog or bear’s fur and looked to be thin, approximately 3-4 inches long. It appeared to not have a neck or it was just too short to notice one. After watching shows featuring Bigfoot and seeing renditions, they all came to the conclusion that they witnessed seeing a Bigfoot.”

Adding to the mojo of the area, the Maricopa County Chain Gang buries indigents there.

LINK:  To date, there have been more than 5,300 indigent burials in the White Tank Mountains by the chain gang. The identity of the dead and the circumstances surrounding their death often remain unknown. 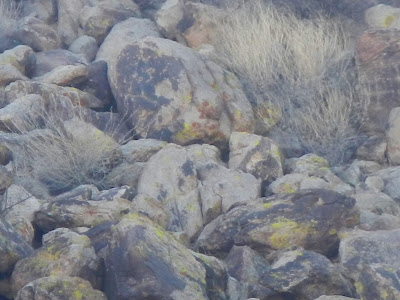 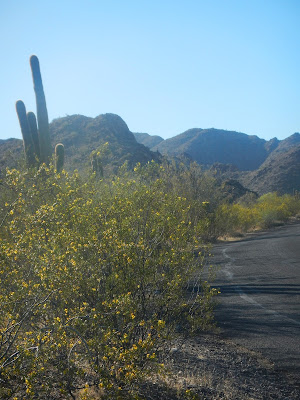 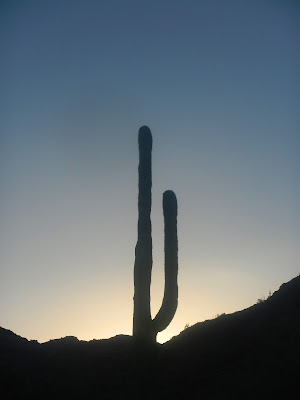 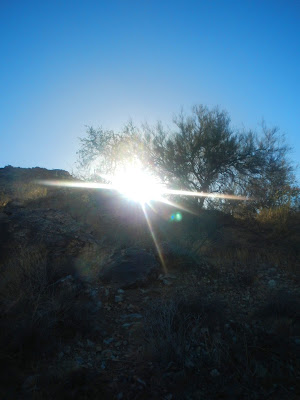 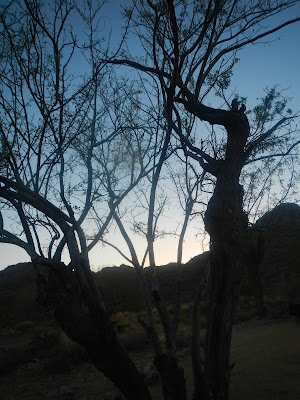 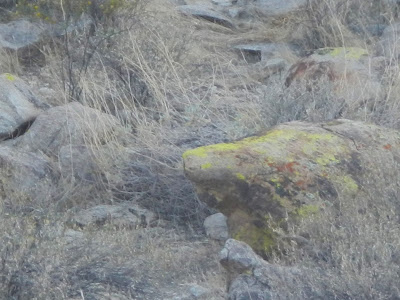 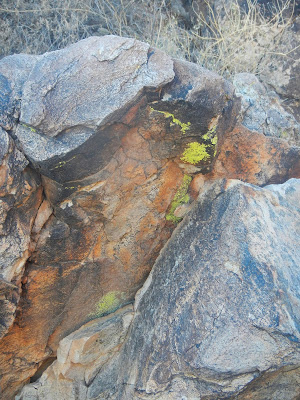 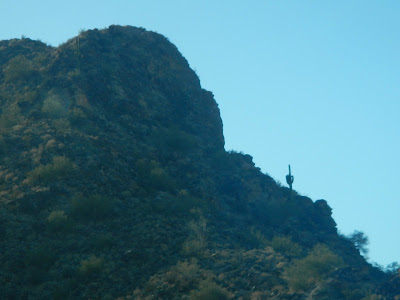 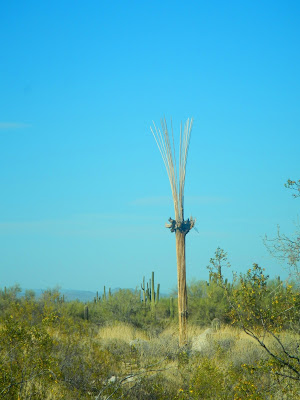 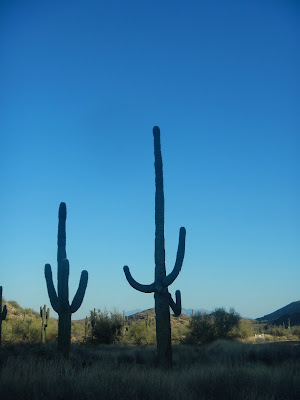 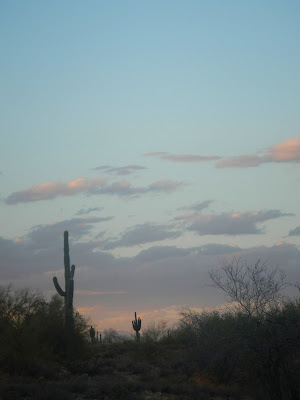 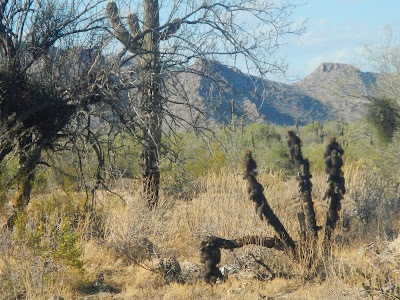 One rock area up high had me looking with the camera a bit closer. Looked to be a rock in front of a cave. To the right and left of it appeared to be medicine wheels etched into the rock. 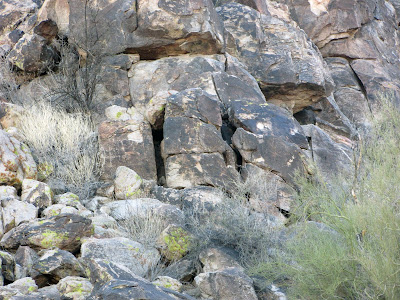 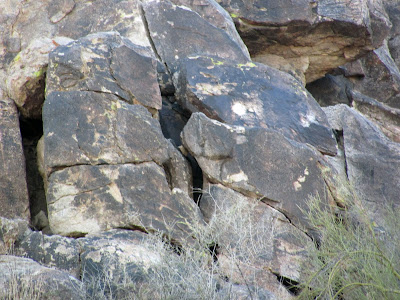 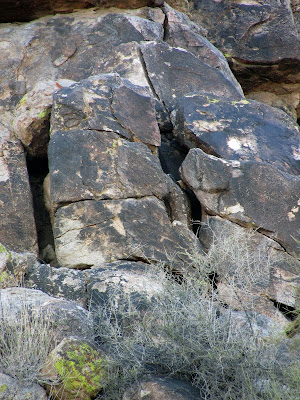 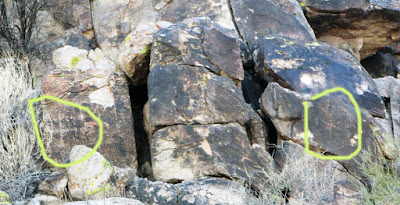 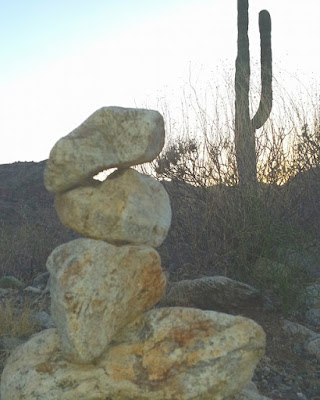 They offer hiking and even camping in the park and it's quite well maintained. I highly recommend it, most especially near sunset as the mountain and the setting sun do magical things, lighting the cacti with golden hue.