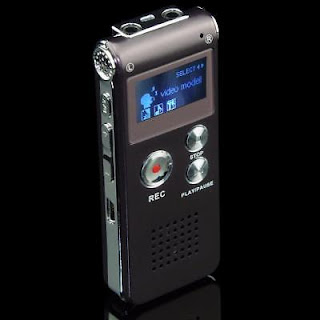 Recently, our team's EVP specialist, Jim, was discussing why our EVPs tend to come from recorders that were not in the room that the person asking the questions was in. This had us discussing possibilities.

We've long discussed if PK (psychokinesis - a psychic's ability to affect an object) might be at the heart of electronic voice phenomenon (voices picked up on audio that were not heard by those in the room until they listened to the recording later).

In the case of a recorder in another room providing EVPs when the interviewer was in the other room, here's some things to consider:

If PK were an issue, likely the person (PK producer) would affect the device near him/her. That being said, we might be able to eliminate PK from our explanations in the case of other-room responses.

We've also long pondered if a microphone is necessary for recording an EVP or if the voice phenomenon is laid directly into the device.

If this is not microphone-related, one would assume that all devices are affected by whatever burst of energy is laying down a recording within a device. In other words, a burst of energy directly imprints a voice onto a device, why isn't it laying it down in any nearby devices, especially those that are similar models? Whatever method lays down the voice in the recorder must be very directional and specific, not like radio waves.

What if there is a random pattern to what device captures the EVP?

If this is other dimensional in nature, nothing is linear. We can't assume that it is near that particular device, only that its dimension and our dimension met in that spot. This is kind of like you pressing your finger to a 2-dimensional photograph and that is the point of connection.

What we need is to come up with experiments that make it possible to test and eliminate possibilities until we get a sense of actually anticipating which device might be affected.

Our team is narrowing down the possibilities and will be actively sharing all findings on this blog and on our website.