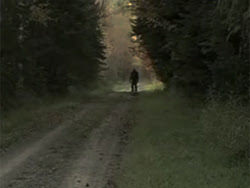 *This account is by a friend and researcher who has seen the world and explored places no man imagined going.*


About three years ago I was wandering about the Leucite Hills in Wyoming around Table Mountain looking for Peridot and Garnet in ant hills. I had found quite a rich spot and spent the better part of the day picking up some beautiful specimens of peridot.

That evening was supposed to be a major meteor shower so after a light dinner I lay across the tailgate of my truck in the middle of the desert with my sleeping bag over me like a blanket watching and counting meteors streaking in.

After a while, a coyote sounded off not far from the truck and then another and another until it seemed I was completely surrounded by coyotes.

For some reason, the howling had an almost urgent quality to it and they pressed closer and closer to where I was at and had me completely surrounded. I had never known western coyotes to travel in such large groups or packs and something told me to go ahead and tuck in for the night in the back of the camper shell in my cot.

I was used to coyotes howling all around me almost every where I camp from Arizona to Montana and every place in between. They never scared me before and I always sleep armed.

Normally I sleep under the stars and avoid the confines of a tent or the camper but I was actually getting a little scared.

I got in, reached out and pulled the tail gate up and closed and then shut the hatch on the back of the camper.

I was sleeping or trying to sleep on my side when I felt the vehicle push up like someone had pressed against it. I rolled over and there under a clear desert night sky was a creature that if I had to describe it with one word would be "werewolf."

I was looking right at it as it peered in at me and I remember rolling over and grabbing the handle of my Ruger .44 Magnum Super Blackhawk, my bed companion when camping in the wilderness and for a moment thought about burying my head under the sleeping bag.

The eyes were not glowing, they almost had a dull yellow green reflection from the moon light and star light but no glow. The ears stood up almost like the story book image of the wolf in Little Red Riding Hood. The muzzle was shorter than what a wolf's muzzle is and more squared up I guess is how I would describe it. I don't recall any teeth visible.

I remember saying out loud, "you've got to be shittin me, what the hell is that thing?" I rolled back over and looked at it again and at that moment it bounded off across the desert and I swear it was in some freaky hyper-animated movements that reminded me of one of those horror flicks where the kids or the old lady is crawling along stuck to the ceiling. The thing that struck me as weird was the way it moved with that strange animation.

I laid there all night fully awake with the revolver in my hand waiting for daylight. I wasn't about to get out and try to make it to the cab of the truck.

Daylight came and I crawled out looking around to see what I could find, actually hoping I had imagined the whole thing but there on the side of my camper in the desert dust was a hand print or paw print with large claws a full two and a half times bigger than my own fairly large hands. I took some photos of the prints.

**when these photos are acquired from the old cell phone that is defunct, we will post these.**