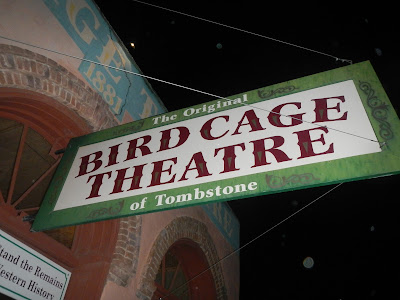 The Birdcage Theater, Tombstone, Arizona
With 120 bullet holes in the surfaces of this old-time western gambling and whoring house, it saw quite a history.

Our team, Arizona Paranormal Research (www.arizonaparanormalresearch.com), was pleased to investigate this site again. It provides phenomenon every time!
I went into it taking the role of a soiled dove. I planned to see if I could pull any masculine energy to show itself. I let them know I was the new redhead in town. During a blackjack session, it seemed as if I were being baited with great cards and winning lots of chips, so I let them know I appreciated their help. 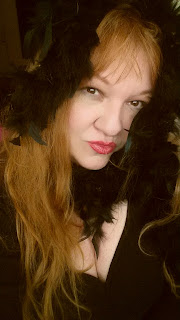 During our group EVP session, we asked questions, but as soon as an investigator started getting a reaction on the KII meter that was significant and on cue, he asked if it was Leroy - one of the caretakers who a few years ago was shot and killed on the streets of Tombstone.

The response from the meter was intense and very specific. It continued to respond as we spoke to Leroy. The meter remained completely unresponsive the rest of the evening following that session.

Between myself and another investigator, the obvious feel of a spirit form had both of us breaking out into an icy electrical tingle on the right side of my body and the left side of her body, as something was between us.

Later we did some interesting experiments like playing blackjack and asking questions while recording.

We also ran a random number generator for an experiment on the concept that these have non-randomized number patterns when something significant is occurring. (Global Consciousness)

We did some isolation sessions and teams of 2. One investigator saw a shadow figure pass in front of a sign near the Black Moriah. A few were touched.

I had an isolation down in the high stakes gambling area in the basement. During this time, I witnessed a white apparition trying to form at the bottom of the stairs. It was the size of a child perhaps around 3-1/2 to 4 feet tall. It seemed to peer around the banister at me and it was part translucent/part opaque as if it were coagulating somehow and the head and shoulders shape formed, but then it dissolved.

Later, another investigator down there saw a child-sized white figure. We later learned that there is a child ghost seen there and often seen as white.

Interestingly, the areas that my divining rods identified as intensely active areas (before we began investigation I mapped the building) were the exact spots we had things happened during the investigation.

The place was well covered with DVR cameras and over a dozen audio recorders. We played back one EVP before we left the building and it was quite exciting! We could hear it on the device very well.

Once evidence is reviewed, we will be sharing it with everyone and hopefully meting out whether or not we had an encounter with Leroy.

Our team likes to try new approaches, test equipment, and techniques, design new testing concepts, and even try some old spiritualist techniques as we want to look for any patterns and repeatability that might offer new knowledge. We won't retire something until we've found its efficacy is repeatedly poor.

Expect to hear more as we go over the evidence.