Growing Up With Ghosts: Part 2 of 3 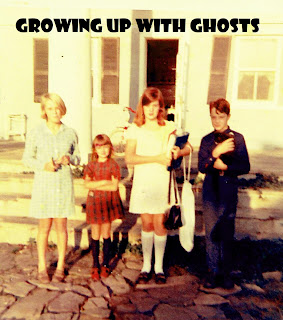 This is part two of a three-part series on growing up in a haunted house. It is my true-life story of being raised since I was a baby in a 250-year-old estate in Northern Virginia that was used as a Civil War hospital for both the North and South at various times. To read yesterday's post, go to this LINK. 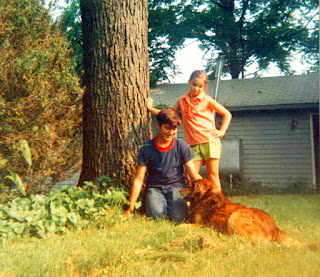 My parents not only had a good attitude about the hauntings on the estate, but they gave us kids a large property, surrounded with woodlands and creeks, to explore and play. The barn became our hideout when it was raining, the hilly pasture our sled run, and the boxwood mazes, delightful hideouts. 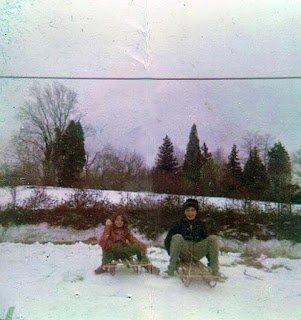 Mother taught oil painting from our home in the sunny window-lined front room and put on art shows in the boxwood mazes, showcasing her artists' works. 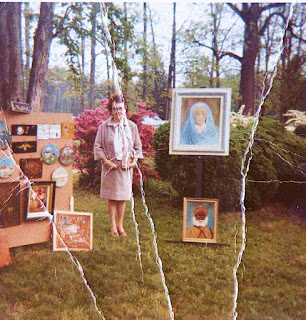 Father chugged along the property on the ancient McCormick tractor on weekends like a gentleman farmer. Ironically, I attended "Green Acres" Elementary School. 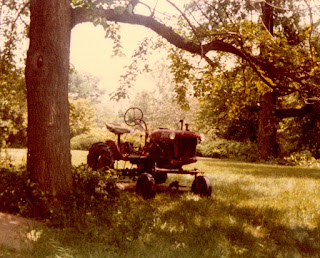 There were a lot of different haunting features on the estate, in the home and on the land. One of the most puzzling ones was someone I came to call Hannibal. In fact, this spirit so "haunted" my memories that I inserted him into my upcoming paranormal romance novel (first in a series) coming out through NewLink Publishing in early 2018 called Ghost of a Chance! (A SEEK Team Investigation).

I have no idea why I chose the name "Hannibal." It could have been psychic or it might have just been that he seemed rather romantic, if not tragic.

The soldier could be seen peering into the window of the little cottage (there were two cottages near each other on the property, a big one and a little one). He was seen escaping to the field nearby where we had a horse. He was seen sometimes riding the horse. My brother even chased him one time into the fog. 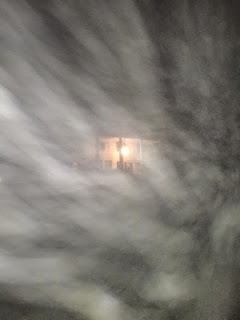 (picture of the house in fog)

In fact, one family friend was playing hide and seek with me and Hannibal on a ghost horse jumped over her hiding place and disappeared in mid air.

My feelings about him were curiosity. He seemed quite real, but then he could just...disappear. Being a fairly empathic child, I wanted to help him, but I didn't know what he needed.

There was also a slave man, a big guy in tattered clothing with a puzzled anguished look on his face seen just outside of what was the foundation of an old kitchen building that had burned down long ago. Like the other apparitions, he had no clue we were there.

It would seem like an idyllic upbringing in a lovely place, but it was rather isolating. The other children lived in tract housing and played together, but our property was a large island and had a reputation that frightened children and parents alike.

In sixth grade, my class decided to take a field trip to my estate. It was rather embarrassing. I didn't want them to see the antiques and big heavy drapes and flocked wallpaper. It felt so ancient compared to their trendy 1970s homes. 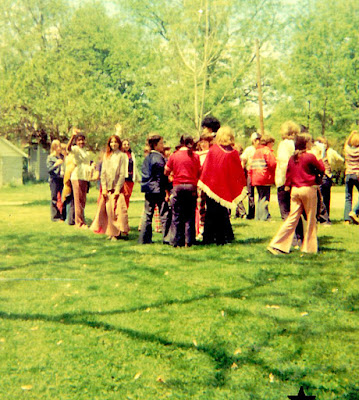 There I am facing the camera, jacket in my hands as the kids lined up to head back to school

But, I was surprised to find the kids were curious and they loved seeing artifacts and playing in the open spaces, seeing the hidden room, and me teaching how to use a metal detector. It helped me to finally take some pride in my eccentric upbringing and feel less like an outsider. 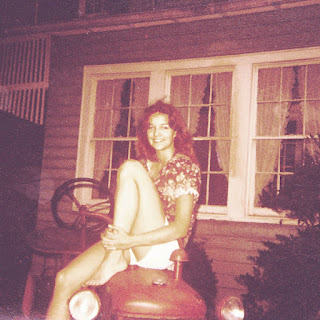 In 1977, because my father had heart disease and couldn't deal with the climate, we moved west to Arizona.

As we were packing to move, the house seemed extremely disrupted. Items would be found removed from the boxes overnight, the plaster ceilings fell from rooms for no reason.

But, one particular incident was the only one to truly terrify me....

My father and brother flew to Arizona to find a rental house. My mother, sister and I were talking about hoping we had a swimming pool at the rental house and citrus trees, chatting away in the breakfast room on one end of the house.

We heard a loud crash on the other end of the house, in the music room.

We all jumped up and raced to the music room and what I saw so scared me that I didn't want to sleep in the house the rest of our days there, but hid out in one of the cottages. It was the first time I ever felt not welcome there.

In the music room, we had set up a jar of pennies on a folding TV tray like we used in the 70s to watch TV and eat a meal. We had papers to put the pennies into rolls and had a dozen or so stacks of 10 pennies on it.

When we came into the room, a giant blown up photo of my mom's uncle in WWI uniform in a glass frame had come down off the wall, traveled about 8 or more feet away, was upside down on the ground, with the tray's legs splayed out and the tray on the ground, every stack of pennies still stacked! Nothing out of place.

I looked at the logistics and realized that it was physically impossible. I had seen lots of objects move on their own, but this particular one was so uniquely impossible, so loud, and yet so flawlessly executed, defying any physics of a painting falling off a wall, that I began to sob and act hysterically. My sister tried to calm me, but she was shaking like a leaf too. My mother backed out of the room. She didn't even want to get closer. 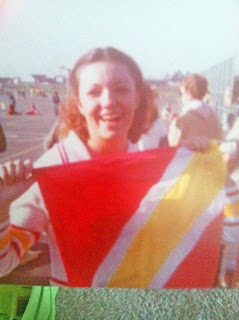 Moving to a new place, new home, and being in high school, I wanted to fit in. No one knew my weird upbringing and everything was so present day around me, with little historic references like the East Coast. So, I assimilated onto a flag twirling team, took up dance, modeling and beauty pageants. I dreamed of a future as a clothing designer or maybe a model.

I felt like I had moved on, but still my heart ached for the seasons, the orchard, the grape arbor, the creek. In fact, all my family spoke wistfully of the beloved estate. It was deeply embedded in our hearts.

I went on to grow up and move on to marriage and raising a child, a career, and home in the suburbs of Phoenix. It all seemed rather ordinary until one day in the early 2000s when my husband at the time and I were asked to a housewarming party.

At the party, the woman who had moved in heard from someone else there that I was a psychic. She told me she thought the place was haunted, she heard a woman cry, she heard footfalls in the hallway.

I walked around the house, explaining the people, where they were, what they were like, what they were doing. This included a man running a business out of a corner room that was unsavory, a frightened little son, a woman who tried to kill herself in the shower, and an elderly woman who rechecked the front door locks over and over in her demented state.

The woman beside the houseowner on my psychic tour gasped. She said that I was 100% accurate about the family who lived there, but they were all alive and living across town now.

In that moment, everything I thought I knew about hauntings and my psychic skills tilted on its axis. And I knew that I needed to officially pursue more hauntings and more information to gather an understanding of the unknown.

So, in my early 40s, I began to officially investigate. I felt I owed it to my family and to a certain pact we made....

*Tomorrow's third and final installment, I reveal the pact my family made and the course my life took to bring me around to ghost investigating!