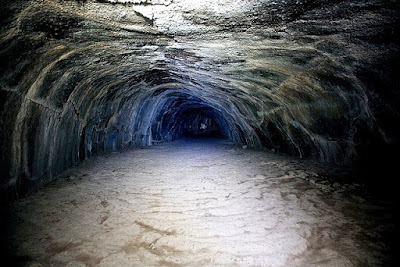 Caves are amazing vessels. They are surrounded by stone and metals, often times created by volcanic activity, disrupted by seismic activity, utilized to provide shelter, to stash treasures and hide away to die. If a home can be haunted, can a cave be even more so? And why?


(LINK) There's a cave in France where no humans have been in 26,000 years. The walls are full of fantastic, perfectly-preserved paintings of animals, ending in a chamber full of monsters 1312-feet underground, where CO2 and radon gas concentrations provoke hallucinations.


It is believed prehistoric man appreciated the acoustics and resonance in caves. When they chanted, it resonated in a way that aided their connection to divine state of spirit.

I was discussing this with one of my favorite researchers, Don Monroe. Don has had a lot of photos inside of caves that were so confusing, he set them aside.

He recently decided to sort through them and see what he could make of the images. He captured faces and beings that should not have been there in these desolate hidden caves. But, even repeated trips to the caves, he kept capturing more.

Sometimes, he would go to send them to someone and then the photos were missing. Many months later, they would pop back into the folder out of order. He could not explain it. It was just a combination of oddities that defied any logic we know. Other times, the batteries of a charged phone or camera would die even though having shown a full charge before entering. When Don went to text photos to people, they went missing in the ether. He would have a fellow researcher with him send the photos and they would disappear upon sending or from their phone. 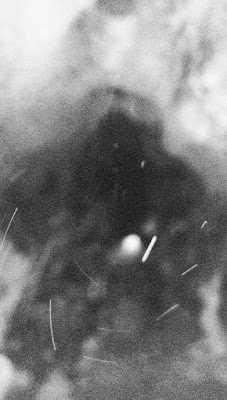 This (above) was in a cave where Don had photographed a face 5 years prior and came back with a couple of researchers. He had showed them the pic of a face when he was going through a collection of photos, but did not tell them that among the caves they would be exploring was this very cave.

When they were inside the cave, the men were uncomfortable and a photo was taken (above) of a dark shape that showed up in no other photos. At the time, the flash had them seeing a face. The men told Don they thought it looked like the face he had shown them in his photo collection. They verified that 5 years apart the same face was seen there. 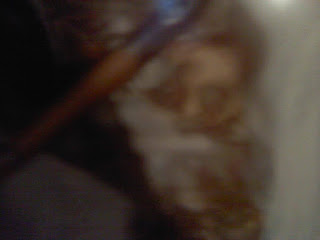 Every early December, Don went back to the cave where the Massey man was photographed. Near the cave was an area where someone would dig at the same time each year. Don had seen knee marks, a hand mark, and they dug very deep to get to water in the hard cold ground.

Oddly, this photo (above) was taken when he leaned his rifle up. Ironically, it seems like a face holding something white up and then a hand gripping it. The hand looks to be wrapped in rags. This is even more impressive because in that cave, he had gotten this handprint that appeared to be wrapped in rags. 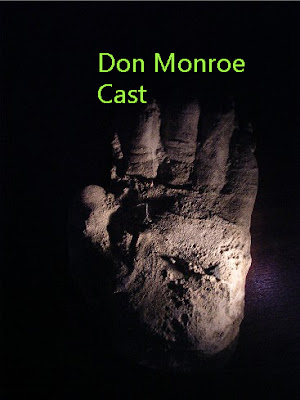 Other unusual shapes showed up in caves, on a single photo, but not the photos before of after taken in the same spot consecutively. 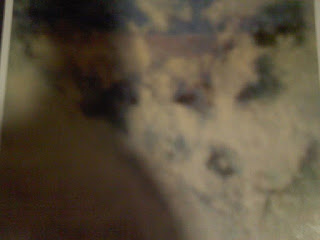 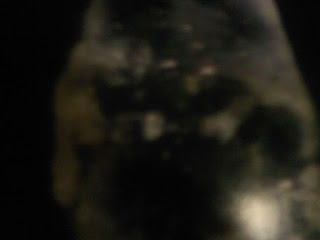 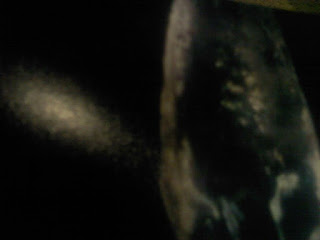 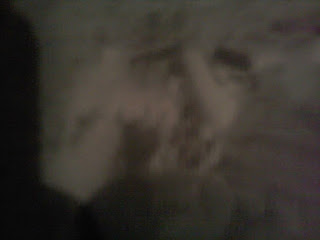 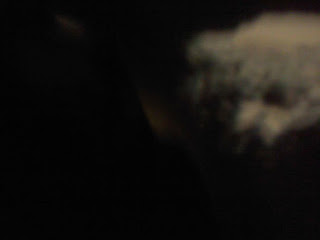 It's easy to dismiss shapes found in photos. 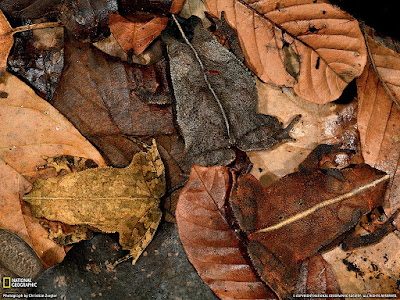 For example, the toad (above) is very hard to note until someone tells you to look for a toad and you begin to look at the patterns and then it becomes more apparent. 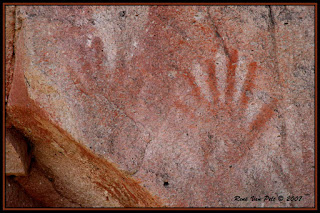 The interesting thing about caves and hauntings is that man has always used caves, sometimes died in it, sometimes buried their dead in them, sometimes lost battles with creatures. They took time to draw on the walls, to build fires, to seek shelter.

In terms of ghosts, our equivalent these days are very old buildings (as in the olden days, no one died in hospitals, they died at home) and institutions like hospitals and prisons where people died.

Imagine a cave that has tens of thousands of years of death and occupation. Now, put on top of that the location within stone. Now, it gets highly likely there are hauntings in cave. We just don't have people lingering long enough nowadays to encounter the clues.

Hearing voices in caves is a real common occurrence. Now, some caves might have access to the outside through other openings and people's voices could echo. That being said, there are closed mines that have no one in them but one individual who is not speaking when they hear voices. Are these ghost voices or residual from the past replaying? We can't verify either, but they are chilling.

Kentucky's Mammoth Cave is considered one of the most haunted caves in the world. This massive cave system has been occupied at various times throughout man's history in America and even during the Civil War.

It was mined for saltpeter during the war. At other times, it was used as a sanitorium for TB sufferers.

The ghost of a man named Floyd Collins is said to haunt the cave system when the explorer went looking for another entrance and died. His body was exhumed and moved around a bit before settling in a local cemetery. It is said he protects people in danger within.

Many have heard of the Bell Cave Witch in Tennessee from the 1800s. It is said it's hard to capture a good photo of the opening of the cave. Inside, people hear voices and cameras stop working. The cameras not working in caves scenario is very prevalent.


The Apache Death Cave has an interesting legend.

In Diablo Canyon in Arizona, there is a story of Apache warriors raiding a Navajo camp and killing the people, stealing girls. When the Navajo trackers went looking for them, they came across a blast of hot air and found a hidden cavern. The Apache had taken shelter there and the heat from their fires gave them away. They returned to their people and told them of the hiding place. Then, the men went out and gathered brush and filled the mouth of the cave to burn them out.

The legend says the Apache ran out of water to put out the fire and slit the throats of their horses to use their blood to put out the flames. They lost in the end (LINK). 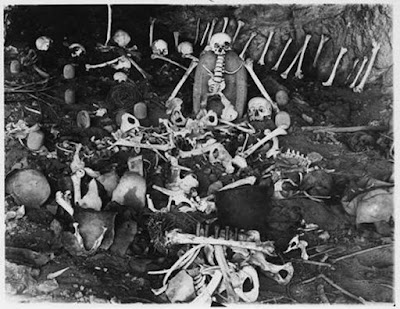 The Navajo people believed the land to now be cursed. Eventually, the white men decided to build a town atop of it, naming it Two Guns. Today, Two Guns, Arizona is an abandoned town of decay. Too many residents had issues with ghosts. Some citizens were murdered, others had their buildings burned down. This is sort of an old west version of the movie "Poltergeist" but it is an important lesson about land remembering....

Would caves be more haunted than buildings? Given the cul-du-sac feng shui, the geophysics, surrounding stone, and traumatic histories, they should be an ideal spirit vessel. In fact, some caves around the world are referred to as the entrance to hell. The bones of cannibalism were found in caves on Easter Island, the aborigines tell a story of burning a giant in a cave, as do the Paiute tribe of Nevada. Miners have long complained of cave hauntings to the point that creatures such as Tommyknockers were spoken of to explain mischief and bad luck within. 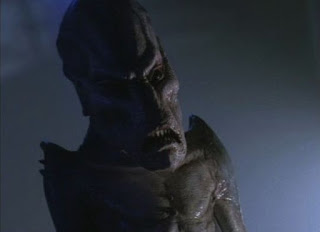 Caves have a claustrophobic effect on people. In terms of Feng Shui practice of good and bad energy following paths, the dead end and darkness would attract bad energy. Caves also contain gases that can create hallucinations and the very sound qualities within can reach a resonance and vibration that is unsettling. Containing metal and quartz, being under seismic pressure, and having housed people in times of great distress or death, the question of whether caves are haunted should be answered by, yes!

Here are some more videos (below) to pique your curiosity.

The question may not be whether or not caves are haunted, but why wouldn't they be?