The Relationship of the Dead to the Living 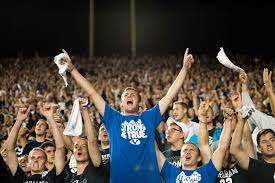 We can't know how the dead are connected to the living. That we call them "dead" seems such an oxymoron. They are truly more alive, more present than we can even imagine. Upon my father's near-death experience he told me "that was the real world, this one is fake!"

People ask me about the relationship of the dead to the living.

If you will, imagine a young man who played football with all his passion and all his desires.

Now, decades later, he follows the teams of his youth, attends the events, screams and cries and rejoices.

He is no longer in the game, but he is still a devoted fan as he knows what it took to play the game and all the sacrifice. So it is with our ancestors.

Now, imagine a stadium of them attending you.

Always there for you to call on for a cheer, as they remember what it was like to play for the mortal team.

They understand the universal perspective that you and I on this earth are in the process of learning compassion and humility that being in mortal form forces upon us.

It is somewhat akin to a wealthy parent disowning a child and making them earn a living on their own so they can learn hard work and budgeting, the worth of their own capabilities, and the independence it brings.

Without the mortal time on the stage of life, we would never understand life in all its forms and the preciousness of what we have when we were gifted souls. Each of our experiences is recorded for all the ways in which a human can live a life, given free will and resources.

Here's a video I did to explain some more -