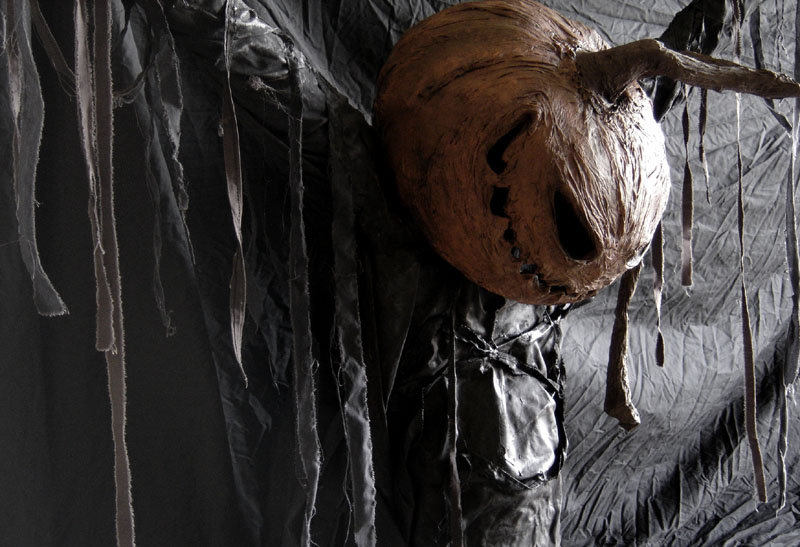 When I was a child, I was obsessed with scarecrows.  I wasn't sure they were effective. 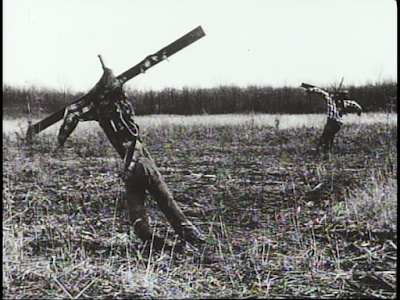 It seemed the crows like to use them to rest upon. 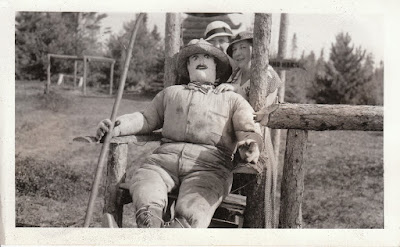 But, those silent sentinels of country gardens were things of nightmares; a human-like figure crucified against the setting sun between rows of bright green corn stalks.... 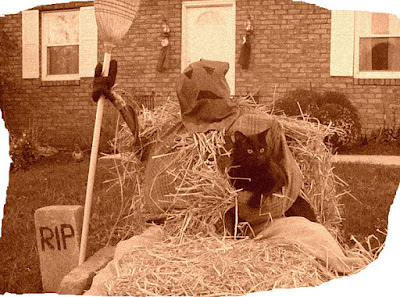 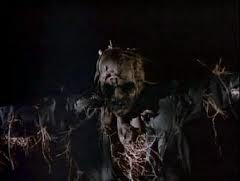 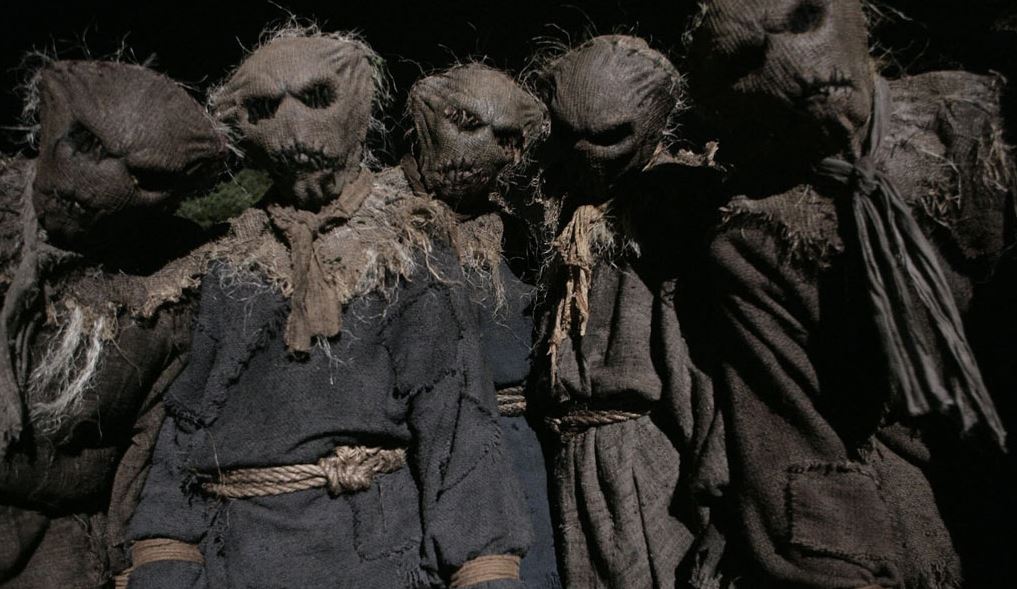 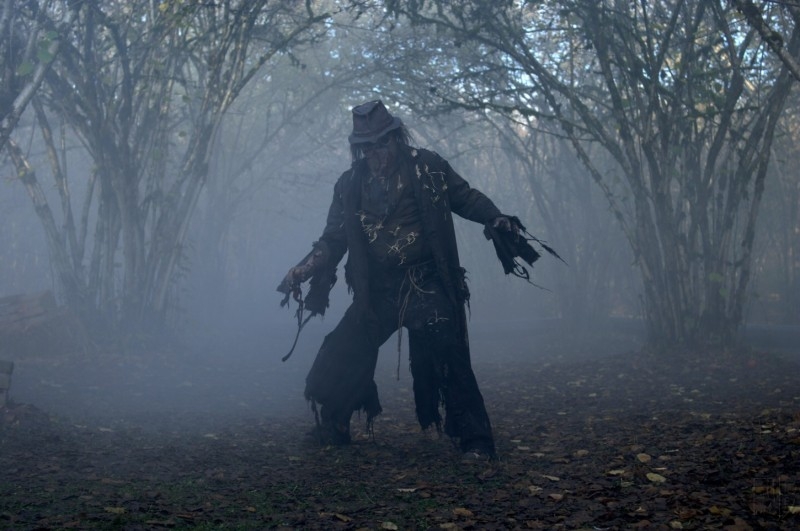 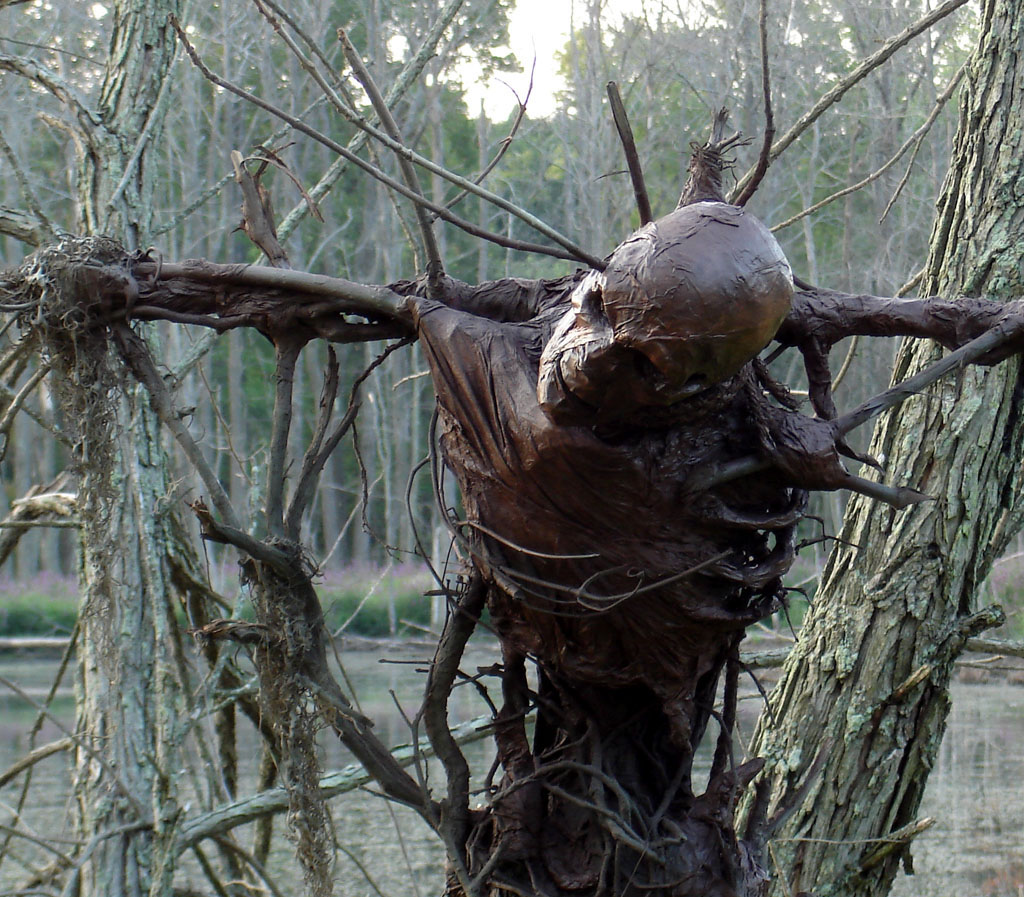 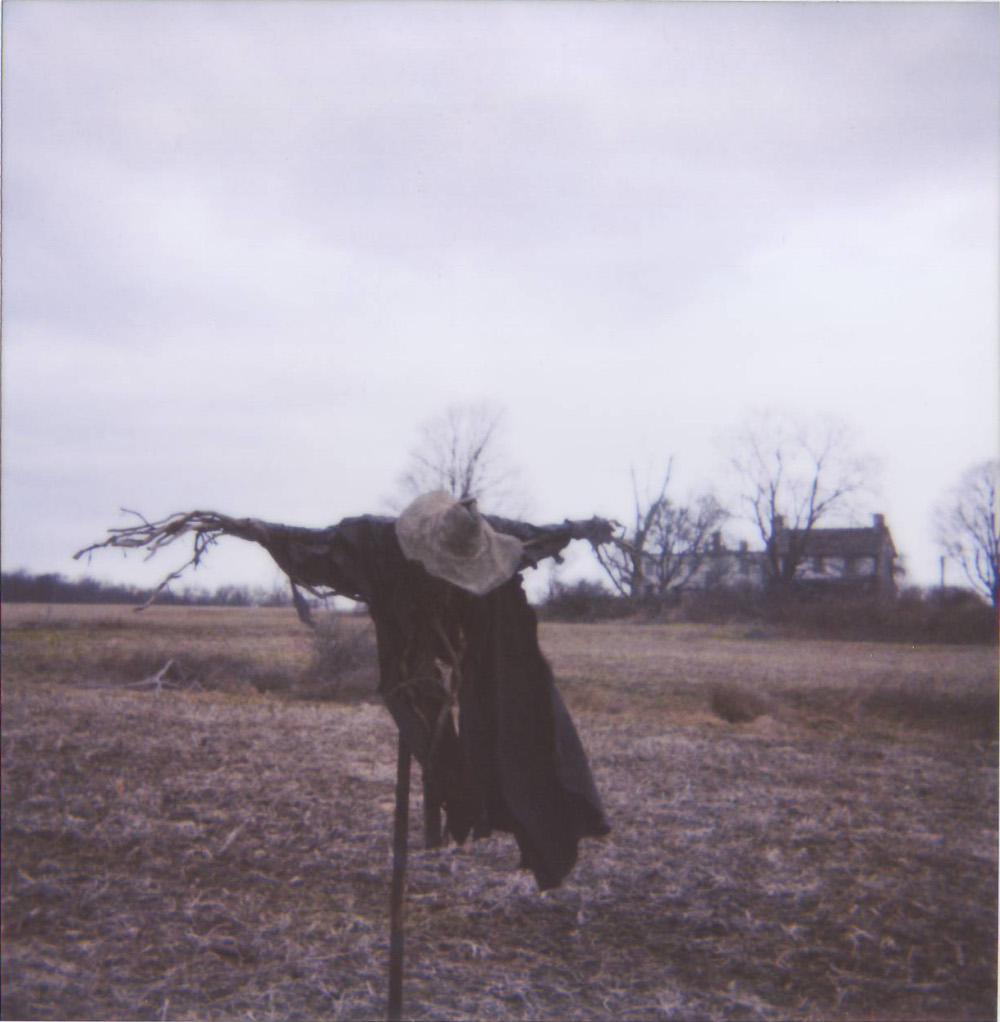 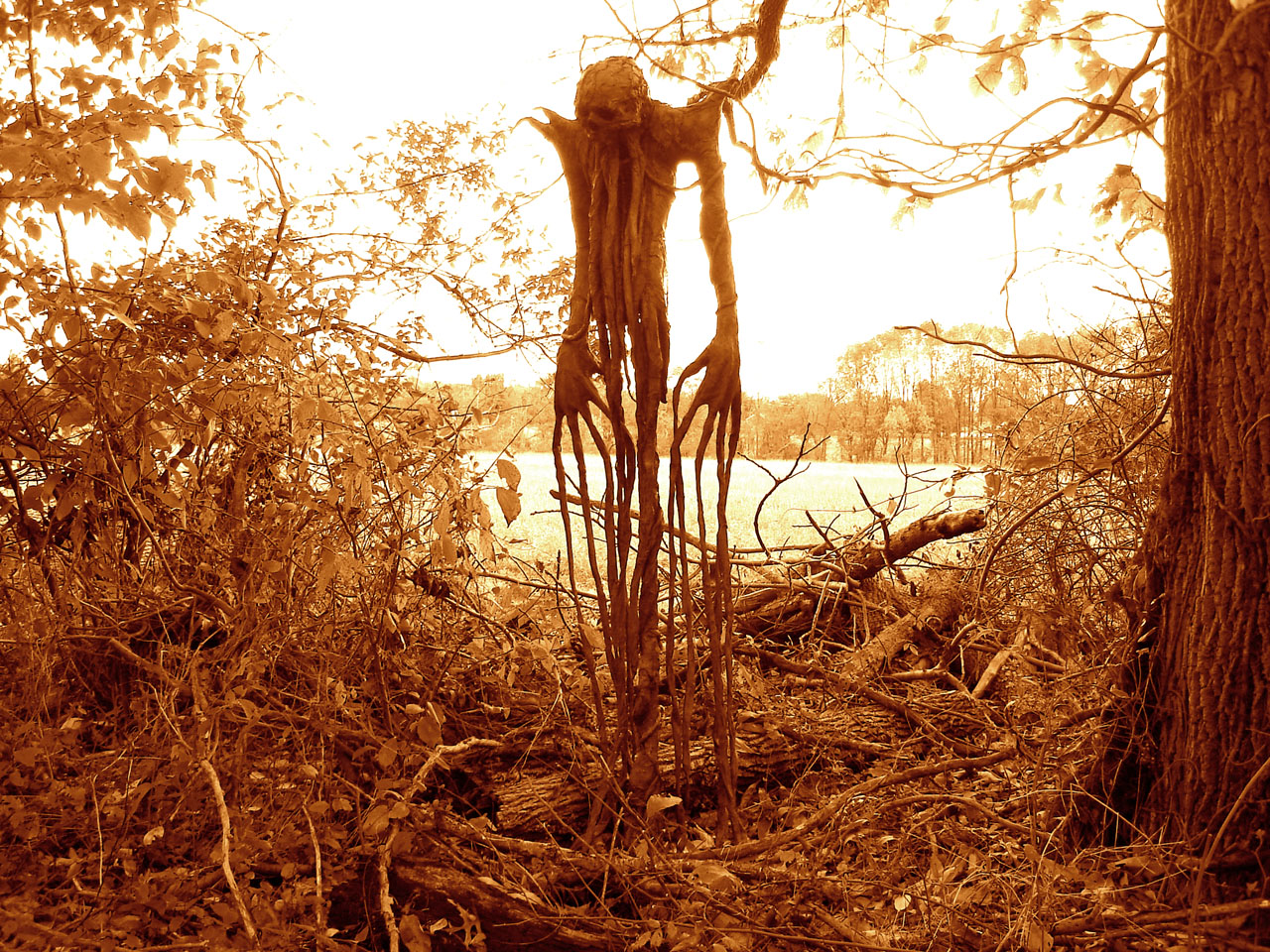 In one of my candlelight tales, I told of my own creepy countryside experience with scarecrows -


I was very inspired this year to make a scarecrow head. He is for sale in my etsy shop and I call him "Crow Eater." 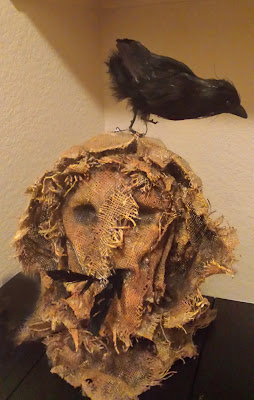 These are not too hard to make, but take some creativity. All you need is a styrofoam head from the craft store (like Michaels or even on Amazon.com), Elmer's glue mixed with water (2 parts glue to 1 part water), burlap fabric and acrylic paints. Dip the torn tattered strips of burlap into the glue water mix and lay across the styrofoam head and paint some more of the glue/water mix atop of it. Let dry. then add more layers, drying between. Get creative with acrylic paints in rust, ochre, black mixed with water to make them glazes you brush on and then wipe off with a paper towel to get a sunk-in, aged look to the colors, or dripped on to look like weather aged it. The styrofoam head usually has a pre-cut hole in the bottom, so you're ready to put it on a stake. This "Crow Eater" above has some feathers in his mouth and a bird atop of him missing its tail feathers....

We can thank the Egyptians for the first scarecrows. They built them along the Nile to scare off the quail from the wheat. They put nets between them and caught the quail for supper. The Japanese put them in their rice patties. To those of us in America, they have become a symbol of rural life and folk art. 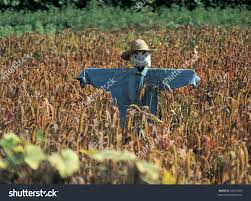 Along the line, we learned to regard them in darkened fields as ominous effigies. 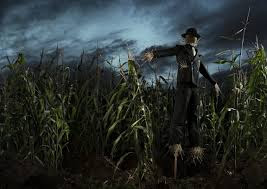 Today, birds are discouraged with sound cannons and silver shiny streamers, but our "field people" are still around as a nod to planting season and culture.

Movies like "Jeepers Creepers" (1 and 2), they took on a very sinister life - 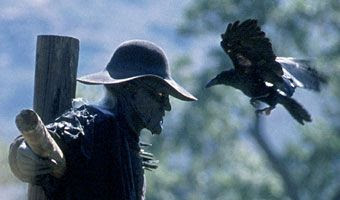 In the movie "Sleepy Hollow" one greeted us in a sinister manner in the opening scene. 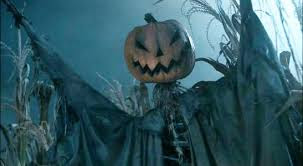 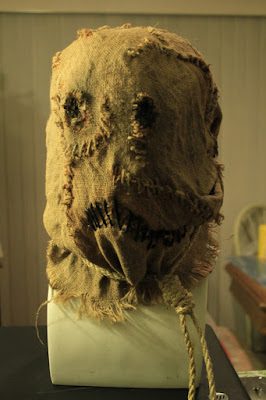 Scarecrow costumes are a favorite at Halloween and there is so much you can do to freak out the kids, by standing in front of a cross, arms out and awaiting their skip down you walkway to lunge out at them. Wearing a scarecrow costume to a party allows you to be in loose comfortable tattered clothing and dance like a maniac without anyone knowing who the idiot is that can't dance. 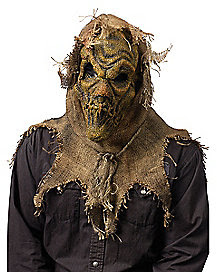 Spirit Halloween mask $19.99
Add your own tattered worn and frayed flannel shirt and torn jeans, perhaps some raffia straw from the craft store....

Decorating with scarecrows can be the most effective creepy tool ever - 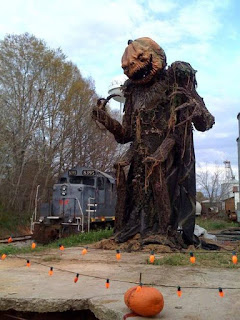 And while you have the costume on, perhaps you should.... 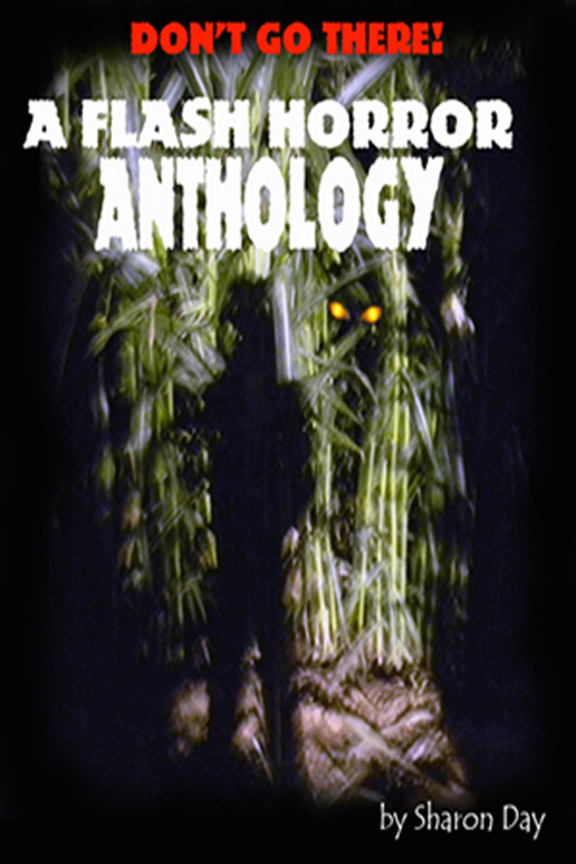 
There was even a scarecrow miniseries - let's go back several decades.... "The Scarecrow Romney Marsh" 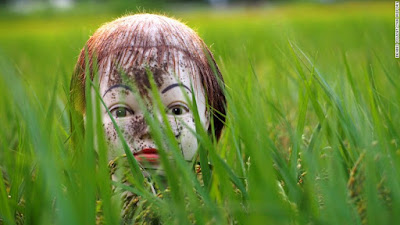 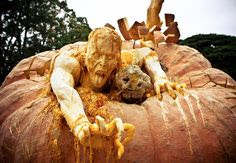 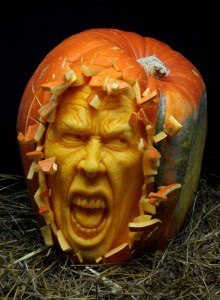 This year, our favorite pumpkin carving artist of all time, Ray Villafane (I buy my carving tools from his online studio), has taken on scarecrows - bless his soul! This unbelievably talented artist is going to forever change the art. 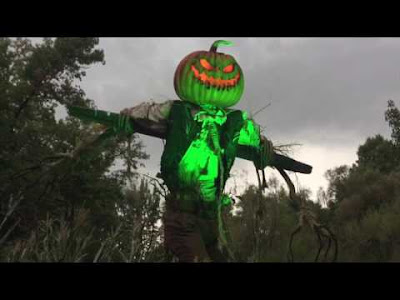 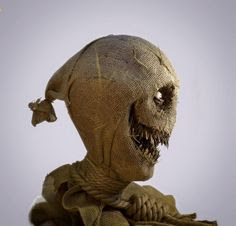 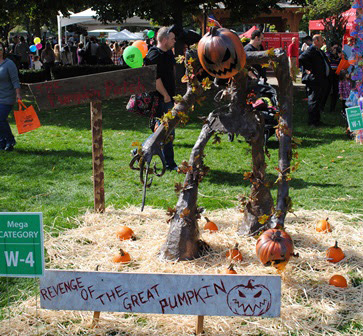 If you're in St. Charles, Illinois, you might go to the Scarecrow Festival October 7-9 (LINK).  Every year they have this fun shindig with all kinds of vendors and contests. Walk among the scarecrows! 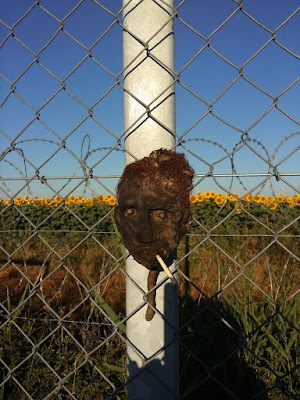 Hungary has been using creepy scarecrows to scare of migrants. It works for me. How about you?


Want to wear a scarecrow costume?


Want to enjoy a scarecrow prank?

Now, if you are sufficiently ready for the season, enjoy some Scarecrow ale as you watch one of the movie suggestions above. Perhaps the creepiest one with a scarecrow main character is - Night of the Scarecrow (1990s) 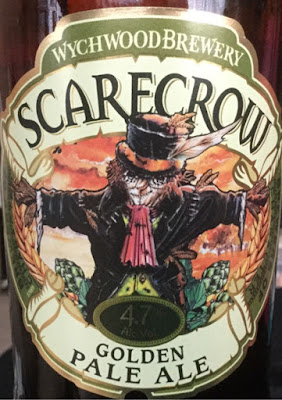