The Wookie Whisperer: The Coyote Men and Sentinels 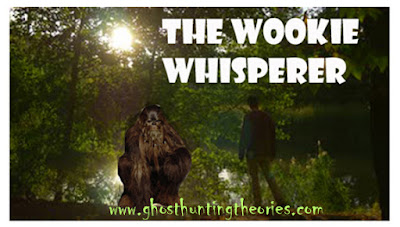 The males in the clan were a unique lot. They gave Dave lots of hours of contemplation as he got a sense of their roles and their relationships. He caught enough glimpses of his Wookie Clan to see their similarities and some differences.

Dave's first thought about the clan in his area was "Wookie." He came by this playful nickname because of their appearance. While many habituators (those who share land with Bigfoot) report different hair styling techniques, Dave's Wookie Clan have a very distinct look among them.

They are all black-haired with the exception of one glimpse of a gray one. He was not gray like our hair grays with age, he was uniformly gray, the color of a gray cat. It was obviously his natural coloring. Otherwise, these black-haired ones wear their hair in bangs and the dread-lock mangy texture of their hair creates a mushroom cap look upon their head where they cut the textured hair to keep it out of the way. Their heads do not appear pointed because they are wearing this cap-like hair atop them.

Their skin is gray, about the same tonality of a gray cat and their features are very classically caveman like, much like Patty in the infamous Patterson Film. Their noses are very bulbous and fleshy. The only skin exposed appears to be on the nose and around the eyes.

Early on in his realization he shared the land, Dave shot a deer that was in the yard. It stumbled down into a ravine and Dave went down after it. Down in the bottom where the deer's body came to rest, he bent over it and got the distinct feeling he was being watched. He lifted his head and listened and then went back to attending the deer, realizing that perhaps some of the Wookies might have scooped up the carcass if he hadn't gotten to it so soon.

Dave straightened up and rubbed his stomach and called out, "I'm hungry." He had no way of knowing if they understood, but his tone and gesture might make them realize that the deer was his. He had earned it. He removed the head and left the guts, then began the tedious climb up the incline with his bad knee. Dragging the deer through the brambles and undergrowth was a slow and difficult process. At one point, he heard snickering from the undergrowth below. He didn't let that deter his determination to claim the deer, but it certainly showed him they had a sense of humor.

One night, Dave got up to use the bathroom and went past the front door where he looked out and saw something along the roadway. The light atop of the post outside illuminated a small dark figure, about the size of a male chimp but very stocky like a gorilla in build, walking on all four, his feet landing in the hand prints, causing a composite print on the ground, no doubt. The movement was like a gorilla might do, but looking down more. Although he saw no females around him, he also knew they usually cleared the fencing and headed out toward the distant pond to bed down around 3:30 a.m., so this little boy had to be heading out there with the others beyond the fence.

Over time, Dave evaluated that the clan seemed to follow water. There were also interesting paths in the woods that were wide enough to drive a truck along. They were kept neat of any debris and it became apparent to his observation that such pathways gave the clan a fast, silent and uninterrupted highway through the forest when needed.

The Wookies would sit up above the creek to watch what came to drink and to also have a clear view of anyone's comings and goings. It was a fine vantage point and once again showed their strategic thinking.

To Dave's way of seeing it, there were some separate roles for the males. One set of males got themselves nice and skunk-stinky, a weird mix of burnt material, skunk and sweaty horse. This would be a valuable tool in order to hunt and not raise the attention of the prey who would not turn their head to such smells.

These hunters ran with coyotes. They worked up the pack and it allowed them to make all the sound they wanted and to herd the deer. Sometimes, when the pack quieted down, Dave could hear the chatter of the Wookie Hunters in the oddest mix of animal-like sounds and chatter. He had to wonder if perhaps they utilized an animal-sound based language simply to be able to communicate unnoticed or even to upset the animals in the forest. He had heard them making dog barks to incite barking, and they did incite the coyote pack, so it wasn't entirely impossible that they also utilized blackbird and rooster sounds as well as other noisy birds and animals to distract.

The clan certainly mastered their environment and adapted to use everything available to them, including their cunning minds. Dave felt a respect for such adaptation.

The other role among the males was the sentinel. These men watched for incoming outsiders, dangers, and watched over the women and children in the clan. They were the silent guardians.

When the women were on the ridge doing their whoo'ing sounds, there were always a few males between them and the house, lurking in the bushes and overgrowth, silent, but protective.

Dave stooped down one day to find what was obviously some sort of well-worn hand-held hammer. There was no debris from grinding anything, so his best guess was that it was used to work on other stone items. 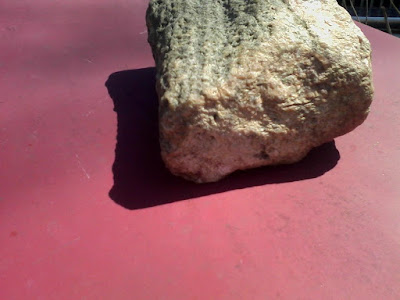 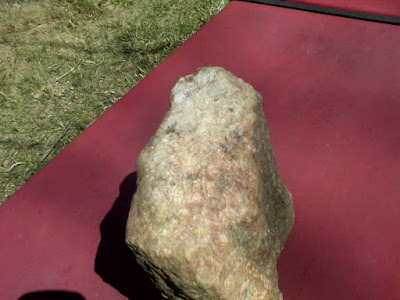 One time at night, Little Andy looked back as he was on all four and Dave shined light on him. The youth's eyes shined, he stood up, then he went back down. Dave turned the light down and the kid stood back up. The eye shine was a bright green, like daggers, obscuring the face. When the light had been on Little Andy, Dave could see the mushroom-like head of hair and bangs that the clan wore.

One evening, Dave heard a noise over toward his neighbors. It was a tin metal noise that wasn't expected. Wondering about the neighbor, he grabbed his spotlight and his 357 and went in the truck to be sure no one was messing with neighbor's property.

He drove by and saw nothing the first time. He turned around at neighbors, and caught him in the spotlight in a clearing. The figure froze in his position on all four and he was surely 8 feet tall in that position from Dave's perspective. He was massive! Built like the Incredible Hulk. He had a shaggy hairdo, more beard than most he'd seen, the ragged drape of hair trailed down his back. He was hunchback but that was pure muscle.

Dave could sense the male was uncertain what to do. He redirected the light so it didn't blind him and opted to try talking to him. "Can we be friends? I won't hurt you. I won't harm your family. I want to live in peace."

The male looked at him and then ahead and then back and forth as if assessing his situation and making a decision.

Dave hoped the hulking Wookie wouldn't charge him. He wanted to give him no reason to feel threatened, so he set the 357 on the seat.

To Dave's surprise, and with great grace, the male walked through an opening in the fence like he knew he was the king of forest. Once he got to fence opening, Dave pulled up and couldn't see him anymore.

One evening, Dave took the coffee can of treats out for the ladies. He would set it on a post about 18 feet away from the corner of the barn, not far from the sliding barn door.

As he came by the open door of the barn, he heard a menacing growl, only the growl was way up high, near the ceiling. The ceiling was 10 feet up!

In a split second, Dave decided what to do. He turned his back on the open doorway to show he was no threat and that he trusted the trapped Wookie would not hurt him.

He then set down the treat can on the post for the females and then walked briskly back to the house.

There were only a few unfortunate encounters that led to a "zapping." One was an evening when it was dark out and Dave stepped out to smell the scent of a male, close to the house. It was a mix of sweaty horse, sulfur and skunk. He tried to speak to him in a calm voice to he wouldn't be threatened and then - boom! A fast rush of emotions from anger to fear, hatred and doom hit him all at once. The sensations slammed into him, creating a shudder of chill down his spine. Then, another wave hit him. Dave made his way back into the house and the sensations subsided. He had to wonder if perhaps this hunter male was close to the house in search of easier food sources like the dead animals Dave left at the end of the road or perhaps critters trying to get into the trash. Maybe he was performing some kind of recon.

Whatever the hunter's reason was, Dave hoped he was deterred from coming that close to the house again, given the unpredictability of the humans inside. The Wookies might assume humans don't come out much at night, but this human did!

In a moment of utter perfection in timing, it was late afternoon when Dave was about a block away with a pond between him and the woods. It was a time of year when the green growth had died back and he could see between the trees.

He watched in surprise as about 20 deer raced through the woods, followed by as many coyotes, and yet followed by three male Wookie hunters. It was a stunning site and confirmed some of his hunches about running the deer.


**Below is an interesting video of a Lapp woman doing an ancient herd calling technique called "Kulning." This came to mind when Dave was explaining some of the odd sounds up in the coyote pack and had this researcher wondering just how they might manipulate the deer and other creatures of the forest with sound.**