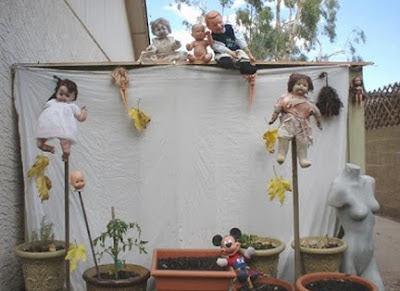 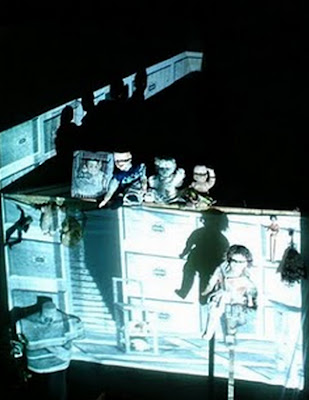 How do you know, before you put a lot of effort into it, that your Halloween prop idea is going to be a hit or a flop?

It has to do with how to know when to add just a bit more and when to stop.

For a post-apocalyptic graveyard-themed Halloween party I did in 2009, I put these dolls up around a shed. It looked pretty creepy and unsettling, like Doll Island (my inspiration) but then I took it a bit further - I projected a creepy doll film atop of it (Brothers Quay "Street of Crocodiles"). Now the creepy dolls add a dimension to a creepy doll film and unsettle those who hate dolls even more. Had I tried to animate the dolls, I might have taken it too far with their jerky movements. I let the moving film give motion to it.

This is a great prop from Spirit Halloween, just gorgeous, but having a voice for it - big NO-NO! It ruins it. It's like a horror movie - full frontal ghost is not as scary as wondering what's behind the door you are about to open. Seeing this move without speaking - you fill in your own mind's horrors as how it got life and what it wants.

Rule #1:  Don't feed people the story line. Make them be baffled and asking WTF???? Avoid giving figures a voice or even sound effects like creaking or thunder or laughter. They become irritating very quickly.

If you don't punch this prop (below) after 15 minutes, I'd be shocked!


Rule #2: Take something unsettling and put it in an unexpected place. Sure, we don't like a stuffed clown head mask, but what if you took the vent off your air conditioner in the hall and stuck him up in there looking down??? Now, you've given him a story line - he is in the attic and he's watching you! 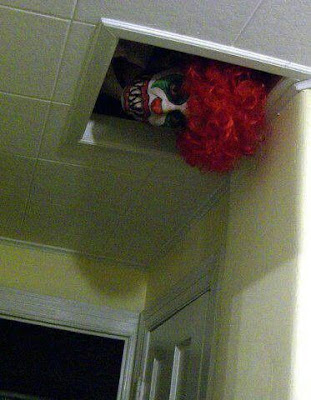 Think outside the box.

Props don't have to sit on a table or stand at a window, they can be up in a tree and you catch only a glimpse and some glowing eyes and wonder what antics they are up to, they can be on a rooftop peering over the eaves, or hiding in a bush.... It's that very cryptic nature that makes us wonder at their motives. It is much more effective than standing out in the open like "here I am, a 6-foot tall werewolf." Instead, place him behind a bush near the front door so when someone goes to ring the doorbell, they turn and see him.

The novel approach is what startles people. Remember the movie "The Ring" when the girl comes out of the TV? That was unexpected because it defied our natural world concepts that 2-dimensionals cannot come out and interfere with our 3-dimensional realm. 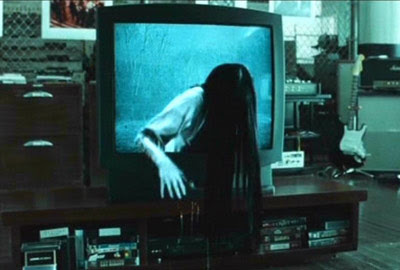 Rule #3:  Obscurity is your friend. Don't be afraid to put cheesecloth or plastic over a figure to make it a bit more murky and questionable. A bit of light on one side of a body, leaving the rest in the dark is unsettling. The key is to not show every detail but leave the viewer wondering just what they are seeing.

Some designers get so involved in details that they end up taking out mystery and inserting distraction. When you see it "all," your eyes tend to stop studying the details. It's when you omit or obscure details that a prop looks familiar, but not quite "right." 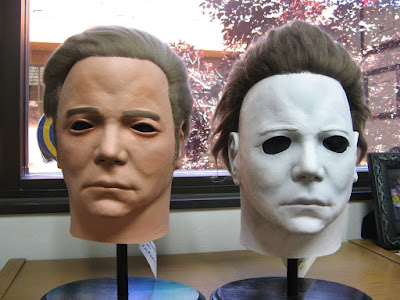 Carpenter had it right when he showed us that simplifying actually makes something more horrifying. Obscuring features instead of detailing them lets our minds be mystified. We know what a face looks like - eyes, flesh tones, frown lines... But when you remove the eyes (something we depend on to evaluate soul) and then give unnatural tones to the skin, you have just simplified something to create one of the most horrifying Halloween masks of all time. We cannot read this face, we cannot see the eyes, it is lifeless....

Sometimes, simplifying or obscuring parts of a Halloween prop is the best gift you can give it. Any artist can give every detail, but the eye tends to see the story that is written out. We view a detailed werewolf and we are done looking.

It's the faces that are missing something, somehow unnatural in color or orientation, that make our protective senses engage. Human-like, but not human....Now, look at the image in this mirror (below). If you saw this on your wall, you'd be looking around the room anxiously. This is not a hard item to make. You might want to look at my 3-video playlist of how I made my own ghosts mirrors. I plan to make this particular one to have in my home always. I will do this by spraying the glass with water and then spraying with mirror paint after I have adhered the figure's imagine to the glass and worked away the paper backing to let the mirror paint go through it and make it ghostly. You can't quite make it out, but there's someone standing there that shouldn't be....

Rule #4:  Groupings have impact. It's one thing to have a creepy doll in a chair, but what about a window filled with dolls, eyes removed, and glow stick lights inside? Don't like ventriloquist dolls? What about an audience of them? 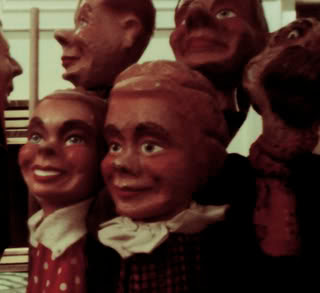 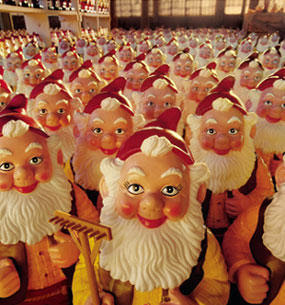 What if your guests had to weave through a pathway made in an enormous grouping of gnomes?

Rule #5:  Consider mixing things that are unnatural. To see something levitating that shouldn't fly, to mix two kinds of creatures together into one chimera, to put a head inside a jar, is very disconcerting. 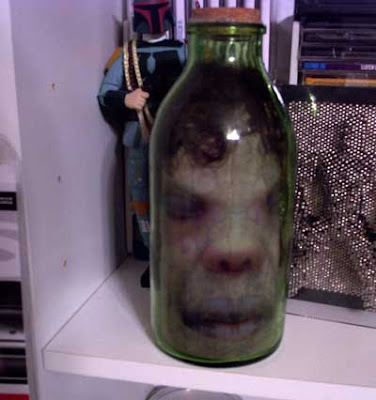 Rule #6:  Lighting takes things up a few notches. There is no single better factor to show off your prop than the lighting. The lighting is so important, it is like the makeup to the model. When you add lightning flashes, a subtle blue backlight, or glow from within, black lights, and the like, you are forcing an atmosphere that makes people naturally draw their eye to certain lit areas and then ponder the darkened ones...

Let's say you have a hallways and guests who might need to use the first door on the right down the hall, make the hallway utterly dark, place a mannequin at the far end, have occasional lightning flashes from behind him so he is silhouetted. They have to wonder if that's a person, is he going to come down the hallway? What does he want? You can put a machete in his hand too if you like or an ax. I think it'd have more effect with a black cape and a fan that makes it flutter.

This is only the beginning of good rules for Halloween Prop Making. I hope to have a whole chapter in my upcoming book Adult Halloween: Taking Back the Season! devoted to these tips.