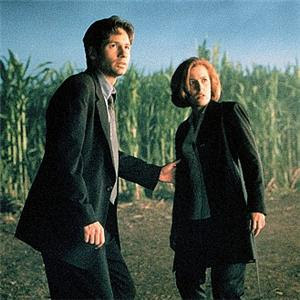 With talk of "The X-Files" being picked up again as a limited-episode possibility, many of who lived for new episodes are beginning to revisit the series again. In fact, Netflix has it on instant streaming.

I personally liked the occasional Mulder and aliens episode, didn't like the government conspiracy ones, but lived for ever single monster episode. ("Darkness Falls" is my personal fav)

In order of airing -

Season 1, Episode 5 "Jersey Devil" Mulder and Scully track a legendary creature that has roamed the New Jersey countryside for over 40 years.


Season 1, Episode 8 "Ice" Mulder, Scully and 3 scientists travel to the arctic to investigate what happened to the previous team of scientists sent there, and discover what they believe is a new life-form that makes its host want to kill other people.

Season 1, Episode 20 "Darkness Falls" A group of loggers working in a remote forest unearths thousands of deadly insectlike creatures that paralyze and cocoon their victims.

Season 3, Episode 22 "Quagmire" Mulder suspects that a beast similar to the Loch Ness Monster is responsible for the deaths of several people who reside near a large lake.

Season 5, Episode 4 "Detour" While driving down to Florida with two other FBI agents to attend a team-building seminar, Scully and Mulder are drawn into the disappearance of several men in a wooded area. Rumors are soon circulating in the nearby town that there are monsters in the woods. Mulder soon believes there is definitely something in the woods causing these deaths and nature itself may be seeking revenge in the form of invisible creatures. He and Scully go off into the woods and encounter the creatures firsthand.

Season 6, Episode 13 "Agua Mala" At Arthur Dales' request, the agents go to Florida during a hurricane to investigate the disappearance of Mr. Dales' neighbors, two marine biologists and their son. During the storm, Mulder and Scully get stranded in an apartment building where a sea monster is on the loose.

Season 7, Episode 12 "X-Cops" The investigation of a neighborhood monster isn't too weird for the crew of Cops to follow around Mulder and Scully.


Season 8, Episode 12 "Medusa" Doggett takes to the Boston subways to try to figure out where a deadly agent that is killing citizens is coming from.


- Consider getting the whole series -


Here's hoping the new series focuses on the weird stuff like Kolchak did and less on the conspiracy goverment stuff.