Is the Government Altering the Earth's Atmospheric Charge? 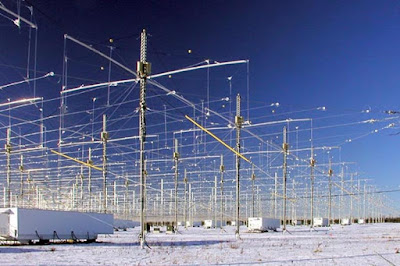 HAARP:  A massive experiment performed in Alaska to take multiple antennae and high frequency radio waves in the ionosophere above the earth. The purpose was to excite the ionosphere. It's kind of hard to imagine this was allowed. But, it has caused a great deal of conspiracy and conjecture about what it was really for, and communications purposes seems rather unlikely.

The ionosphere is roughly about 37 miles to 370 miles above the earth. It is ionized by solar radiation. Because they are up so high, the radiation from the sun strips them of some electrons, causing ionization.

Source:  The ionosphere has major importance to us because, among other functions, it influences radio propagation to distant places on the Earth, and between satellites and Earth. For the very low frequency (VLF) waves that the space weather monitors track, the ionosphere and the ground produce a “waveguide” through which radio signals can bounce and make their way around the curved Earth.

This explanation might be able to support the concept of what HAARP was created for - communications understanding and expansion. But, what would high frequency radio waves do to the ionosphere and to us? Let's recall that removing electrons can cause negatively-charged ions that give humans a positive effect, such as how you feel near a waterfall, but the reverse occurs when electrons are added.

Tesla made an amazing observation that perhaps the government has taken to heart while going through his notes....


Source: Tesla experimented with electromagnetic flux and studied the earth's gravitational field. During his research he discovered that the ionization of the atmosphere would alter when it was charged by radio wave transmissions in the low frequency range of 10 to 80 hertz. Tesla also discovered that he could cause both positive and negative ionization of the atmosphere by manipulating the radio frequency. Further studies indicated that with positive ionization, people and animals became tired and lethargic and with negative ionization the effect was one of feeling active and energetic. It can be manipulated as a military and government tool.

-- Now let's look at this - HAARP - microwave frequencies to our ionosphere - whatcha think that might do? Positive ions - creating sluggish minds and low moods; negative ions causing good feelings and energy. Boost your country - lower your enemies? Just my own observation here....