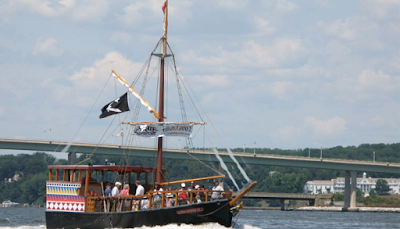 (Pirate Adventure on the Chesapeake)

It isn't talked about widely, but for 200 years, the Chesapeake Bay dealt with pirates. 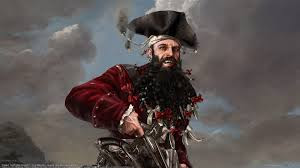 Perhaps the most infamous pirate was Blackbeard. After a life of pirating on the seas including the Chesapeake, Blackbeard settled down in North Carolina to the married life. That didn't last long, however, when Governor Spotswood of Virginia sent Captain Maynard to duel him in North Carolina. After winning, Maynard brought Blackbeard's head back to Hampton Virginia on the bow of his ship.

When I was back at my childhood summer home area of the Tidewater Region of Virginia last summer, my friend Julie and I did a little stop by an infamous supposed ghost pirate location, Old House Woods.


You can find a spine-tingling rendition of this legend in Weird Virginia (the Weird USA book series is my serious fav!!!)

The Hebron ghost lights are well known in the Maryland area in the County of Wicomico. First reported in the early 1950s, a spectral light was seen in the woods. Town officials wanted to explain it away, but the locals came up with a legend of a slave who was hanged in the woods and others said it was a slave trader and murderess.

Source:  A highly skeptical Maryland state trooper, C.C. Serman of the Salisbury barracks, along with several other officers, was sent to investigate and chase the light.

Serman described the light as looking like a "sort of phosphorescent wash basin."

"The light which appeared to travel about 50 miles per hour, eluded the troopers. The troopers agreed the light wasn't a gag," reported The Sun.

"The light, according to a police report, bounces along a back road which connects Hebron with United States Route 50. Or rather, it doesn't exactly bounce. But it can disappear from the front of a witness, as Trooper Robert W. Burkhardt has declared, and reappear behind him," the newspaper reported.

Whatever this "thing" is, The Sun reporter wrote, it caused "an uneasy tingling along the nape of the neck."

I find this interesting because in my account in my book (below), I had watched blue balls of light dance around the graveyard across the sandy road from our summer home on the Chesapeake in Mobjack Bay. I went to investigate and heard a whizzing sound and felt the hair stand on end.

In my book, Vacationing With Ghosts, I share my childhood experiences at our summer home on the Chesapeake and the unexplained phenomena of the area, including the pirate legends. The book even includes a section of Chesapeake recipes from my childhood.

And, if pirates and spooklights aren't enough, the Chesapeake also has its own monster, Chessie. She is reported as the typical serpent/dinosaur form. Interestingly, the last time I went back to visit the Chesapeake, I was out on a boat going to the lighthouse I used to play in as a kid when the captain shouted "dolphins!" I was shocked to see dolphins in Mobjack Bay. I had never seen them as a child and I practically lived on the water. He reported it was something newer in the past several years. Perhaps a manatee or other creature not usually known for the Chesapeake has made a showing, but the legends of sightings of Nessie continue today.

For all her mystery, the Chesapeake is one of my favorite bodies of water in the entire universe. The culture, the people, the zillions of little inlets leave you filled with mystery and awe. 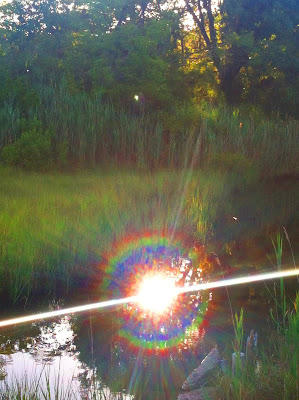