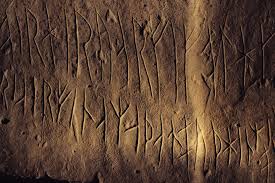 (this is NOT the stone being talked about below)

There is a legend that in 1010 AD, there was a skirmish between a Spokane Washington Native Tribe and the Vikings!

All of this began with a boulder that was 50 feet long and 15 feet wide with inscriptions on it.  A professor read that it was dated 1010 AD and described a fight between 24 men and 7 women Vikings and the Natives. It reported that half the men and one woman died and were buried there. The ones who wrote the inscription and survived supposedly swam the Columbia River to escape. The inscription alone wasn't all, there was also a carving of the Norse Goddess, Freya, in a style that was used in Scandinavia. It was said that the Natives took the remaining women.

Interestingly, the Mandan Tribe in North Dakota was found by early explorers and they had blue eyes. It was obvious they had bred with people of European background. Should the tribe have taken the women back in 1010 AD, in hundreds of years, that tribe's could have relocated, moved around, displaced the blue-eyed offspring, or some other variation, but it might have explained the Mandan's unusual characteristic.

This legend is pretty extraordinary and I have yet to find anything that leads to the truth. The hard part about researching extraordinary claims is finding true ties to real people and real places. I haven't yet found the supposed Northern Royal Museum of Denmark where the boulder is said to reside or the supposed runic expert, Margarette Amundson Reynolds who transcribed the symbols. The article that is repeated all around the Internet, speaks of Philip Howell of the tribe who says that there are blonds among his people and that is proof. Of course, a thousand years have occurred since then, so at any point when Europeans entered, the blond could have been introduced. This man, however, does appear to be real, so far the only verifiable person mentioned.

Did this extraordinary event really happen? Well, without verifiable locations and people associated with it and no enormous boulder to prove it, it's rather hard to swallow.

LINKS
More info on a professor supposedly asking for translation