Native Tribe Thought Extinct May Not Be! 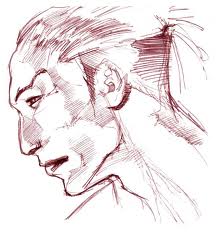 In 1528, Cabeza de Vaca and other Spanish Conquistadors lost their ship on the Texas Coastline and were taken in by a band of Coastal Natives called the Karankawa. This tribe of kind and resourceful Natives were nomadic along Texas's coastline in search of food sources and living a contented life. That is, until Europeans began to inundate Texas and bring disease, strife and disruption of their lands and by the 1800s, the tribe was considered extinct.

The Karankawa said to be able to catch bows in the air and shoot them back (an interesting characteristic attributed to red-haired giants in the Lovelock Cave area and other giants in legends). They also had a skull shape called "otamid." Some misinformed people have assumed they practiced cranial flattening, but they had a true os inca bone (interparietal bones) that created a sort of bun-shaped or pointed look in the back of the head. They also had pronounced brow ridges, sloping foreheads, and powerful jaws.  These were the earmarks of the interesting and rare Coastal Natives whose origins were other than Native American, resembling Australoid type instead of Asian and being tall of stature (over 6 feet). They also wore ear spools, a characteristic described of the long-earreds of Easter Island and the giants of the past. They practiced tattooing and piercing, also characteristics of South Pacificers.

It was also reported at various times that the tribe had bark-less dogs and cannabilistic rituals, as well as bows that were as long as a person is tall, able to shoot with amazing accuracy.

Source:  The Mitole was a ceremony performed to celebrate a great victory. It lasted three days and three nights. It was at this ceremony that they earned the title of cannibal. In an effort to prevent the enemy warrior from having a second or third life they would cut pieces from the live victim, cook them and eat them before finally killing him. Eating the enemy’s flesh was an ultimate act of revenge. Cannibalism was practiced as a ritual, not as a dietary preference.

With the tribe having been reportedly killed by European disease from the Spanish and French settlers and taking to the wilds in small numbers, it has been widely assumed they went extinct. But, there are some stories that question that. The very last stand of them was on Padre Island in the 1840s.

One case of questionable repute is a man who claimed to be the last Karankawa from Padre Island.

It is reported "Indian Joe" was somehow a survivor of the massacre on Padre Island in the 1800s as a baby, perhaps, and was raised there.

SOURCE:  Everyone called him, “Indian Joe” He claimed to be the last living full blooded descendant of the Karankawa Indian tribe that used to roam Padre Island. He had a talent for drying or semi mounting trophy fish for people. It was said that he sucked the blood out of any creature that he dried or mounted. He would eat nothing but raw meat and went bareheaded and barefoot year around. It wasn’t until his later years that he took to wearing the clothes of civilization.

From the book Weird Texas: Your Travel Guide to Texas's Local Legends and Best Kept Secrets by Wesley Treat, Heather Shades, and Rob Riggs: A treasure hunter with a metal detector was near the mouth of Trinity Bay when he came across another treasure hunter. He mentioned he'd like to take an air boat into the bayous that empty into the Trinity River. The other hunter told him not to do it, there were wild indians in the bayous who attacked people with bows and arrows at the upper end of the bay. It was also said the attackers covered themselves with a putrefied animal fat that made a horrendous stench, perhaps trying to protect themselves from mosquitoes.

There is a man today who claims to be a Karankawa. Enrique Gonzalez, a 65-year-old man with powerful bone structure and deeply burnished skin, claims he is a Karankawa. He claims he is descended from a group that escaped to an area called El Gato, south of Alamo.

Source: Gonzalez says his maternal grandfather and paternal grandmother were full-blooded Karankawas. A picture of his grandfather Silvestre shows a tall robust fellow, thick across the shoulders, with narrow eyes squinting into the sunlight.

“I’ve got artifacts that date back, way, way, back,” says Gonzalez, a retired 38-year U.S. Army veteran of Vietnam and Desert Storm.

Gonzalez recently donated a bow to the mission at Espiritu Santo museum in Goliad State Park, southwest of Victoria.

“That’s mainly what they used their bows for,” Ellis continued. “They could have used them for defense, but their primary purpose was for fishing. What they would do is, they would use a very long arrow, with a barb or a hook on the end of it.”

Ellis dismisses the idea that the Karankawas are all gone.

Experts dispute that it is at all possible than any Karankawa still exist, Gonzalez's stories of his upbringing and the location they hid in, the traditions passed down seem to have some ring of truth. Perhaps the only way to find out truly is to have him genetically tested and to examine his skull shape, as the Karankawa had a very unusual skull shape classified as Otamid and not related to Native American tribes and their origins.

Source:  I recently heard a toothless old fart in a local cafe telling ghost stories to his grandkids I assume. He made mention of ghostly karankawa warriors attacking hunters and fishermen in the woods of Matagorda county. When I was a kid, I was mildly obsessed with these muddy cannibals, so I started reading again and found that surprisingly there are lots of accounts of karankawa sightings from all over the upper coast. Even a Texas game warden reported having a handcarved arrow shot at him by a tall dark "nekkid muddy savage.'

They supposedly went extinct as a tribe in 1870, the more "civilized" ones (Copoatiques) were sent to Oklahoma to live on reservations with the rest of the civilized tribes. A few others died with the Texicans in the battle for Texas indepence and the really wild ones were picked off by settlers along the coast.

What always interested me was the fact that according to Spanish explorers they originally didn't look like natives Americans were supposed to. They stood between 6 & 7 feet tall were very dark had course hair and were covered in tatoos and peircings. Like nekkid Dennis Rodmans all over the coast. I just thought it was weird that such a small gene pool was surviving here on the coast.

They were also said to be very experienced hunting dog breeders

Interestingly, there were tall tribes of Natives on the Canary Islands when the Spanish conquered them in the 1400s and Canary Islands means basically, islands of the dogs. The tribes valued raising their dogs. The Karankawas were a tall coastal tribe and their name meant dog lovers or dog raisers. Many artistic portrayals show the prominence of that importance to the tribe. 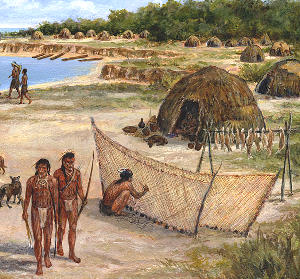 Is it possible that some Karankawa continued to exist into the 20th century? Well, let's look at it this way - Native tribes often were usurped by other tribes, moving their territories often. In fact, many believe the Karankawa ended up in the Texas Coastline after moving out of other encroached areas. Who better to survive in the wilds and know the land and the creatures of East Texas? And, if a healthy population of Sasquatch can remain in hiding in that region, it goes without saying that a tribe could, as well. People often balk about Sasquatch being in the desert and other regions that are inhospitable, but anywhere a Native tribe can live, the Tall Ones can too. It works both ways; if the land is good for Sasquatch, it is good for man living off the land.