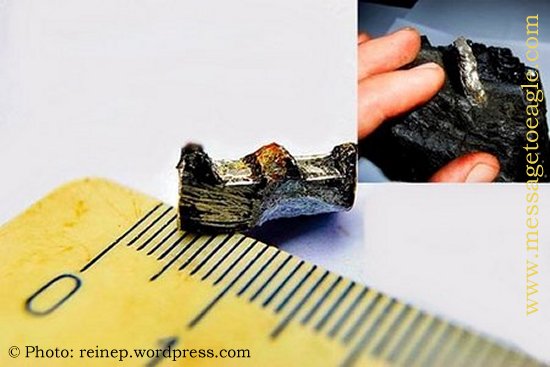 A piece of coal retrieved from a mine in Chernogorodskly Mines in between China, North Korea and the Sea of Japan. It appeared to have something embedded in it.

Source: Initial examination of the strange object led researchers to assert it looked "very much like a toothed metal rail, created artificially. It was like parts [that] are often used in microscopes, various technical and electronic devices," wrote Komsomolskaya Pravda (resident).

The Pennsylvanian coal came from the Chernogorodskiy mines from the Khakasis region north of Mongolia.2 According to international Russian news sourceKomsomolskaya Pravda, biologist Valery Brier helped analyze the odd-shaped object. X-ray diffraction revealed that it was mostly aluminum with about two to four percent magnesium. This unique alloy is not generally produced today. And Brier noted that refined aluminum implies high technology.

This is not the only out of place/out of time artifact found in coal. The problem is, for some reason Creationists are using it to prove that the earth is not as old as we thought (sigh).

Source:  Standard dating of the bituminous coal seam from which it was taken dates it from the Carboniferous Period, approximately 300 million years old. Certainly no human artifact could reside in such "ancient" strata. This "fossil" is anomalous indeed.

The boy who found it in the 1940s discovered it while shoveling coal into his home's furnace. One chunk, about 15 inches by 20 inches in area and 6 inches thick, was too large, and when he broke it a metal object protruded. Diligence completely removed all coal from the bell, which had a two-inch stem between the bell and a "human-like" figure on top--a man in a kneeling position, with arms and wings. Records show the coal had been excavated from a shallow mine near his home in Buckhannon, West Virginia.

The discoverer attended an ICR seminar in the mid 1970s with his amazing find. I asked if ICR could perform some tests on it. It migrated with me to Oklahoma University in 1975, where I remained on the faculty until 1984 and had access to numerous analytical devices and experts in several fields to help analyze the bell.

Nuclear Activation Analysis determined it to be primarily of bronze with a curious admixture of zinc. A micro probe showed no residual traces of coal. Historians compared the bell to artifacts from "all" cultures, and concluded the most similar artifact was from ancient Babel, with the figurine representing a pagan god. Both have a "horn" (broken on the bell) and wings. The face on both is eerily similar. A convention of bell experts did not know its place of origin, although some felt there was a similarity to semi-ancient bells made in India. Their suggestion was that some early American dropped a foreign bell down a well, to be incorporated into the coal. 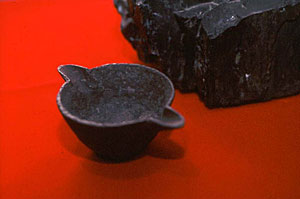 Source:  "The following text is a letter from Frank Kennard, the man who found an iron pot embedded in a large lump of coal. The Creation Evidence Museum has a copy of this letter on file. Sulphur Springs, Arkansas Nov. 27, 1948 While I was working in the Municipal Electric Plant in Thomas, Okla in 1912, I came upon a solid chunk of coal which was too large to use. I broke it with a sledge hammer. This iron pot fell from the center, leaving the impression, or mould of the pot in a piece of the coal. Jim Stull (an employee of the company) witnessed the breaking of the coal, and saw the pot fall out. I traced the source of the coal, and found that it came from the Wilburton, Oklahoma Mines. signed: Frank J. Kennard 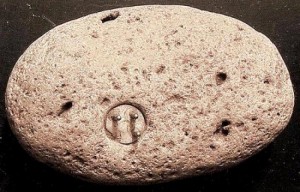 A man named John Williams was out hiking in the 1990s and kicked a rock, then noticed something odd about it. It had prongs sticking out of it like a connector. Details are vague on this, but it is said that the prongs do not appear to be stone or metal, but something unknown. 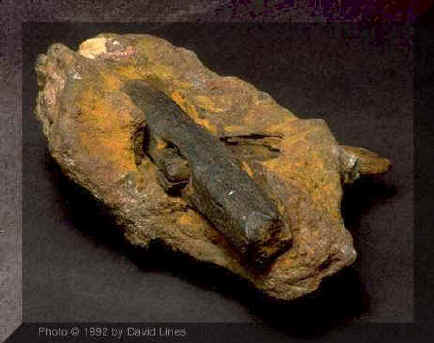 Source:  In June 1936 (or 1934 according to some accounts), Max Hahn and his wife Emma were on a walk when they noticed a rock with wood protruding from its core. They decided to take the oddity home and later cracked it open with a hammer and a chisel. Ironically, what they found within seemed to be an archaic hammer of sorts. A team of archaeologists checked it, and as it turns out, the rock encasing the hammer was dated back more than 400 million year; the hammer itself turned out to be more than 500 million years old. Additionally, a section of the handle has begun the transformation to coal. The hammer’s head, made of more than 96% iron, is far more pure than anything nature could have achieved without an assist from modern technology.

Source:  As noted by Mark Isaac: "The cup appears to be cast iron, and cast iron technology began in the eighteenth century. Its design is much like pots used to hold molten metals and may have been used by a tinsmith, tinker, or person casting bullets... The cup was likely dropped by a worker either inside a coal mine or in a mine's surface workings. Mineralization is common in the coal and surrounding debris of coal mines because rainwater reacts with the newly exposed minerals and produces highly mineralized solutions. Coal, sediments, and rocks are commonly cemented together in just a few years. It could easily appear that a pot cemented in such a concretion could appear superficially as if it were encased in the original coal. Or small pieces of coal, including powder, could have been recompressed around the cup by weight (Isaac, 2005).

While this is a fairly reasonable explanation, these objects need(ed) serious observation closely to see just how much of the material around them varied to show layers of mineralization versus serious compressed coal or rock over millions of years.

Considering the claims of very "Egyptian" looking items in the Grand Canyon and Death Valley giants' cave finds, one has to wonder about the style of these items and their origins, especially from a people who used a style Egyptians and Asians likely fashioned their own styles after and who were known as miners.

I am intrigued, but I am not sold easy, so I will continue to follow such finds and report. As always, I am providing links below to go on your own excursion and learn more.