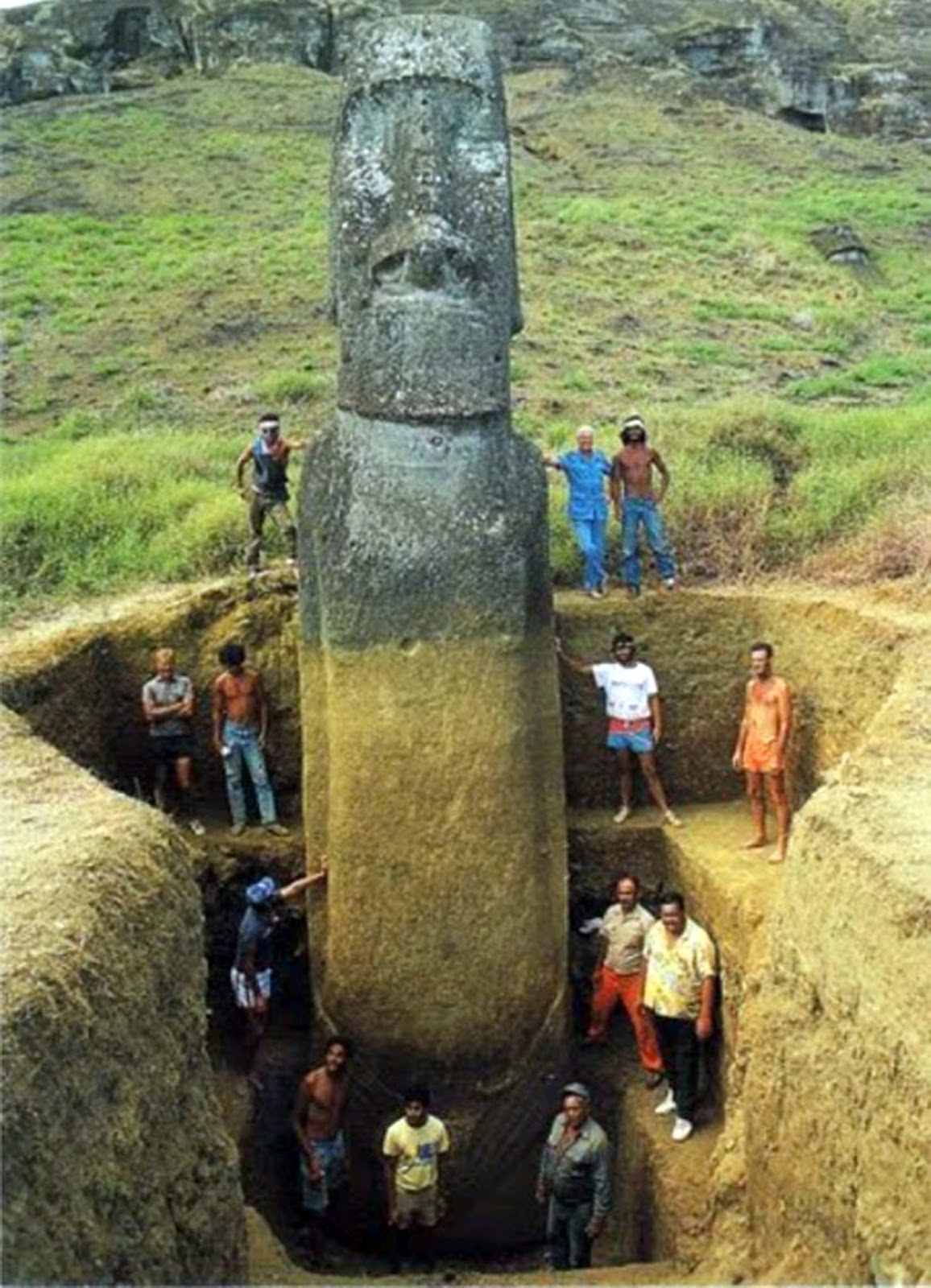 The statues on Easter Island are megalithic and imposing enough, but when you consider they were actually over 30 feet tall with the majority of them under soil (now), you have to wonder why or how these people did this feat thousands of years ago!

The question becomes, were they buried by volcanic action on the island and actually once stood on the ground level or if they were purposely buried into the earth to remain very intact no matter what occurred over thousands of years.

A lot about Easter Island doesn't add up. You have evidence in caves of cannibalism. Researchers like to think the people ended up eating each other after they lost their resources. Theories like this can take fire and catch online and in circles of research and no one can shake them; there is an assumption that is the ultimate explanation - case closed.

We must remain open-minded about what happened on that island in the middle of the Pacific. Many have been disputing that long-held concept. So, what might have happened to them? Hmm....

There were other cultures of Natives who went missing in our world, such as the Sinagua, HoHoKam, Karankawa, Yaghan, and Anasazi, and yet we don't ask why that was it that they seemed to have unusual features or technology and they went missing. Who were they living alongside? What kind of relationship did they have?

The introduction of Europeans certainly had a way of killing off native people very quickly (just look at the Canary Islands Gaunches, Argentinian Yaghan and the Texan Karankawas). Assimilation, fighting, and disease are enough to make a tribe go extinct.

But, were the Rapa Nui the only occupants on this island - ever? It appears they were relatively "new coming" in terms of its habitation so far as dating now at 1200 AD and being found in the 1800s. Less than 600 years for some nomadic people to land on the island, set up housekeeping with a small population and manage to make huge strides in carving gigantic statues and writing???

Source:  The oral history of Easter Island describes the "long ears" as the early period's population and the builders of the monuments. The "short ears" came to the island later and apparently worked for the "long ears" as helpers. A deadly feud occurred and the "short-ears" reversed a trap set for them and murdered the "long-ears" at Hotu-iti.

It's been asked if ancients built along cryptoexplosion sites where hundreds of millions of years ago there was a meteor impact or a major volcanic eruption, but it would seem that such impact or eruption sites would be full of volcanic-like mineral-rich grounds that are ideal for growing. It may be incidental and there might be something they sought there, such as a particular form of rock, that was critical for their building purposes. They did seem to appreciate cave systems, mining, and rich soils near waterways; all things that can be found at volcanic regions. 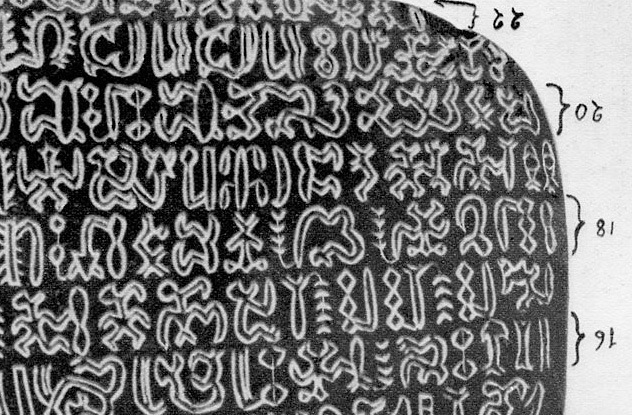 The writing "Rongorongo" found on Easter Island seems to be a mystery of great curiosity. First of all, it has never been translated and second of all, it is believed it might prove independent development of language in a place without influence from other cultures. It reads more like a documenting process for all living things. It is believed to be read as reading the bottom line left to right, then turning the tablet 180 degrees and doing so again. Incidentally, this would be a spiral shaped reading pattern. The Rapa Nui in the 1800s were confused how to read the tablets. Some say the tablets were brought from a homeland to the island, but no homeland has been found. It is believed the language is no earlier than the 13th Century, though these numbers are constantly changing. It is interesting that they had advanced knowledge to build stone statues long before then and move them about, and yet could not seem to create a written language or understand the one they had access to on tablets. Much does not add up.

It does not seem that a group of people who moved into the island around 1200 AD had the knowledge or the capability with its small population to manage to build those Moai statues and erect them or come up with its own written language in 500 years' time in isolation. (Remember my recent post on the City of Petra supposedly built by nomads?) More likely, they moved onto an island that had been established, worked with/lived with another culture that perhaps launched itself off the island for other places or was killed off by rising newcomer population. They did leave, however, statues and writing that the newcomers did not seem to understand and more than a few newcomers apparently became part of the menu as found in the cannibal caves.

In another intriguing twist of fate, it's entirely possible that, like the Europeans introduced Native People to diseases they died from, these Rapa Nui could have done the same on approaching Easter Island and establishing a co-existence with the previous tenants.