The Shocking Finds of the Conquerers of the Canary Islands! 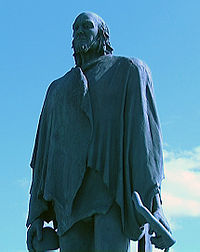 "The ancient inhabitants...were of a human, social and cheerful disposition...the music was vocal accompanied by a noise made by clapping their hands and beating them with their feet...discoverers took a pole and held it over their heads as far as they could and these jumping people could leap over them...The natives were of a larger size, and better made than those of the others...at the foot of a mountain, they had a statue where a person named Mahan was buried. The statue was 19 feet 10 inches tall...." 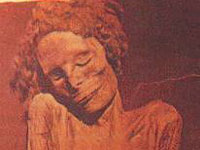 Guanches mummy from a cave

The Guanches (natives of Canary Islands) went the way of many tribe who had European invasion - they went extinct. They were described as tall, blond-haired and blue eyed. And, the Spanish sought to kill off the men and mate with the attractive women. According to the Encyclopedia Britannica, the guanches were, "thought to be of Cro-magnon origins with brown skin, blue and gray eyes and blond hair."

One thing that baffled the Spanish in the 1400s when they invaded was that the islanders on separate islands did not know each other. They had no boats and no way to travel on water. They acted as if they had been deposited on the islands and abandoned.

The Guanches, with no relationship to outsiders, were mummifying their people in caves, like Egyptians, Polynesians and Mayans. This would show a carried down custom, perhaps from their ancestors who settled there - those seafaring giants?

In their own language, Guanches means "White Mountain Man." 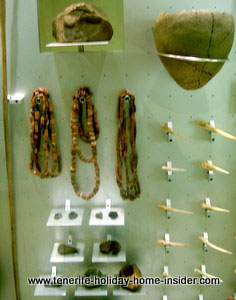 Neolithic tools of the Guanches - note that HUGE axe at top and amazing knives made from volcanic silica that was sharp and glass-like.

It is tragic that some of the most amazing native finds have involved European diseases and domination and the end of a race of people forever before they could be truly examined. No doubt, the caves of the volcanic islands still house lots of mummies still. With today's capability to perform DNA testing....