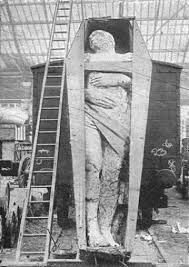 Search for the Lost Giants:  The History Channel on Tuesday nights. This is my very favorite TV show. It is extremely well done and edited and on the edge of your seat. If you are interested in ancient giant skeleton finds - this is your show! Two earnest, hard-working, intelligent, stonemason brothers, Jim and Bill Vieira, go in search of finding proof of this ancient race. You can read the review on here every Wednesday morning.

America Unearthed:  H2 Channel. Scott Wolter, a forensic geologist, journeys around the US looking at some very old script carved into rock, proving that there were influences here Pre-Columbian that were not Native American, but someone else.

Ragnarok:  This movie was a surprisingly awesome find. Not as much about "giants" per se, as mystery ancient legends in Scandinavia and Vikings, runes, and mysteries. Ragnarok is the legend of the ancient gods epic battle.  The ancient and modern worlds collide when archaeologist Sigurd Svendsen finds the true meaning of the secret runes found in the Oseberg ship.

Trollhunter:  This is one of my very favs! A group of students investigates a series of mysterious bear killings, but learns that there are much more dangerous things going on. They start to follow a mysterious hunter, learning that he is actually a troll hunter.

Land of Giants: In the ruins of a post-apocalyptic storm the Giants appeared on earth to punish all those who dare to use the magic called 'Electricity' again. Crutch sets out to hunt down the Giants and take his revenge on those who took his leg from him.

The Thing From Another World: Scientists and American Air Force officials fend off a blood-thirsty alien organism while at a remote arctic outpost.

The Princess Bride:  A classic fairy tale, with swordplay, giants, an evil prince, a beautiful princess, and yes, some kissing (as read by a kindly grandfather).

Pacific Rim:  As a war between humankind and monstrous sea creatures wages on, a former pilot and a trainee are paired up to drive a seemingly obsolete special weapon in a desperate effort to save the world from the apocalypse.

Half Human: Japanese villagers worship a monster and his son who live in an island cave. Some circus people hear about them, go to the island to capture the monster and wind up shooting its son. Then the trouble starts. Found it here for sale.

The Cyclops:   An expedition to Mexico finds and does battle with a mutated 25-foot man with one big eye.

Attack of the 50 Foot Woman:  When an abused socialite grows to giant size because of an alien encounter and an aborted murder attempt, she goes after her cheating husband with revenge on her mind.

Village of the Giants:  Delinquent teen-agers ingest a substance and grow thirty feet tall, then proceed to take over a small town.

War of the Gargantuas: An experimental lab animal called a gargantua escapes from his captors and is suspected to be the creature that is killing people all over the countryside. But when the gargantua from the lab appears at the same time as the evil gargantua, the two begin to battle across Japan.

Jack and the Beanstalk: The Real Story

Jack and the Beanstalk: The Real Story:  The bones of a giant are discovered turing Jack Robinson's life upside down, teaching him the truth behind the fairy tale and how he can fix a greedy ancestor's mistakes.

Giants of the Bible Part 1

Giants of the Bible Part 2

Giants of the Bible Part 3