The Mecca for Texas Horror Fans!!! 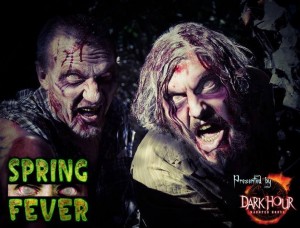 Dark Hour's Haunted House - I wish I were in Texas for Halloween Night!!!

This is not just a vast haunted attraction, it's also got shows running year-round! Hell yeah!!!! Kind of a horror creative village. I love it!

Here's an explanation of the fun ahead for those who dare to dive into the darkness and the season!

Opening its doors to the public for the first time during the traditional Halloween Season in 2013, the goal of Dark Hour Haunted House is a simple one: produce the highest quality haunt experience available. Utilizing sets worthy of a Broadway production, professional actors, as well as strategic use of technology produces a top notch theatrical experience in terror for Dark Hour visitors. Dedicated to reaching as great of an audience as possible, new themed shows are produced monthly which build on the existing theme, but allow for greater exploration of fear.

Carefully crafted in 47,000 square feet which once housed a major sporting goods retailer, Dark Hour provides over 30,000 sq feet of terror to be explored by willing guests. While the visit begins with a stop at the ticket booth, the real experience begins when you step into the cemetery at Coven Manor; attention to detail on each and every grave stone creates the illusion of leaving Plano, Texas and stepping into another place and time. From there, the painstakingly constructed exterior of the Manor beckons the visitor onward to the unknown horror which lies within. It is difficult not to be overwhelmed by the decaying detail found inside.

The sets alone are enough to cause a heart to race, but it is the addition of live actors and the characters they create which breathes life into this den of death. Standards require that actors participate in a minimum of three days training before being allowed to participate in any of the shows. Many of the show’s core characters have been professional haunt actors for decades. In addition to fully functional wardrobe and make up areas with highly trained professionals in each of their fields, masks & prosthetics which enhance the actor’s character interpretation are fashioned on-site.

While Dark Hour includes the implementation of animatronics from the industry’s leading manufacturers, the technological aspect of the show is much more than that. The lighting effects for the show are run on a system usually reserved for concerts & theatrical events. A centrally located console, linked via DMX, controls color changing LEDs instantly altering the look & feel of the show with minimal manual manipulation, allowing for changes during the show without the guest even being aware. Motion sensors are used selectively which provide surprises at optimal moments. The audio experience is controlled by Q-SYS by QSC usually found in stadiums, convention halls, theatrical venues, and major theme parks such as Universal Studios Hollywood, and Knott’s Berry Farm. WAV files delivered by QSC full range speakers produce optimal clarity of sound.

While visitors returning each month can expect to recognize some aspects of the previous experience, great care is given to crafting the individuality of each monthly themed show. Changes in scenes, characters and technological effects maintain the integrity of the overarching goal to provide the best haunt experience to all guests. A dedicated staff has worked thousands of hours in many departments to provide distinct areas filled with fright for the visitor. Each not so simple scare builds upon the last in telling the story of Coven Manor and the horrifying things that happen there. 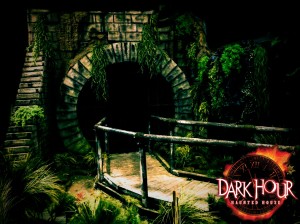