The Stalker Between the Worlds: "Dem Bones" It was just a couple days later when The Walker went back out for his usual constitutional, hoping against hope that he didn't see those boars' bodies yet again.

They had remained a couple days and nothing had touched them or tried to eat them and the buzzards in that area, could pick clean any road kill, but they did not want those hogs.

He paced himself as he came upon the site only to find no boars. He passed back and forth, studied the ground in all directions. Not a single bone or hair remained. It was as if they had never been there.

He scratched his head and puzzled when his eye caught something pale on the ground. He walked over and studied it. 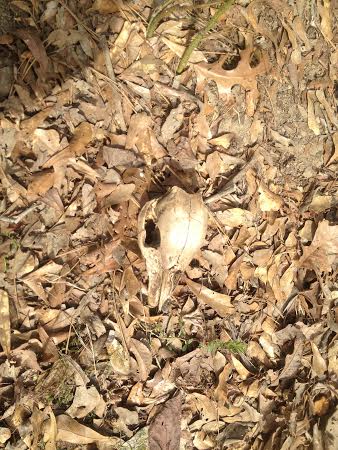 It looked like an aged and bleached deer skull. 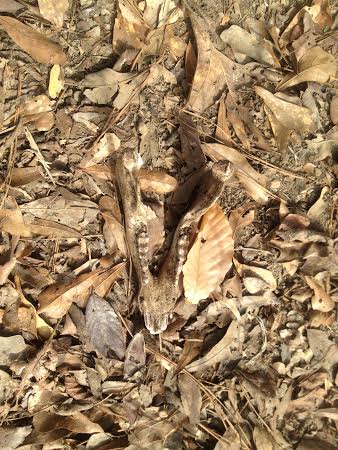 Nearby, there was a mandible. The Walker held them together and realized they were a fit.

They were left in the same spot as the boars. None of this any longer seemed to be just kind of freak kills by nature or happenstance. It was definitely being orchestrated. But by whom? And why?

The Walker stood back up, pivoted on his heels and walked away realizing that something wanted a reaction from him or from others who came across these finds. In fact, that person could be watching him right now. The kinds of folks who kill animals and display them would likely be categorized as serial killer in the making.

Still, it seemed almost like they were offerings. Why? Who would offer up such grisly finds?

Briefly, the concept of a Bigfoot came to mind. He didn't know if they had them in the South, but this kind of thoughtful behavior wasn't an animal and he didn't know of any neighbors demented enough to spend their time killing and leaving creatures behind. So, what if this was one of those tall elusive creatures hoping to make a friend? Comparing the behavior to a pet cat bringing home its kill for its master, The Walker shivered. He really didn't want to befriend one of those big guys if he could help it.

So, he opted to try and ignore the bones. He would walk each day, not glancing down, but managing to move his head back and forth enough to catch glimpse. After all, he may not want to engage this back and forth, but he sure did want to know if it was still going on!

Then, one day on his walk, he couldn't help but give it more of a close look-see. 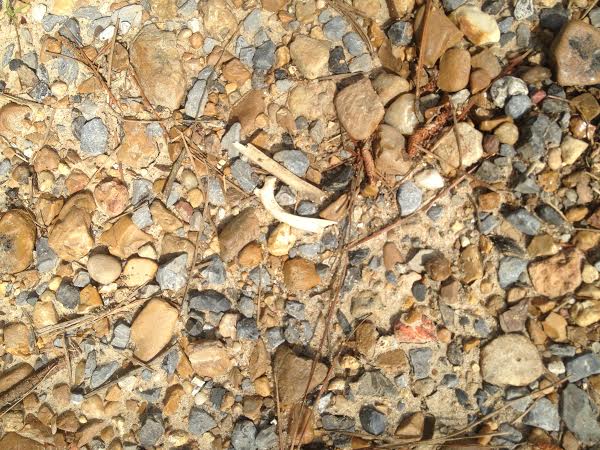 There were some rib bones.

He couldn't be sure, but they seemed like they were the right size to have come off of the first spine he ran into, the one that had no bones with it and left a stain on the roadway.

At this point, there was no way The Walker could ignore this interplay. Something wanted to engaged him and engage him it would! He needed to verify this was intelligent and not some freak of nature series of events.

So, he picked up an abandoned CD and a cotton picker spindle from the roadway discards and put them with the skull.

He didn't want to act too intrigued, so he casually trotted off along his usual walking course and proceeded to berate himself for encouraging this back and forth. Yet, he truly needed to know this was some kind of intelligence-guided undertaking.

So, the next time he walked by, The Walker tried not to give it too much attention as if he were eagerly hoping to see what occurred, but as his eyes glimpsed over the area, everything was in place as before, but the CD was gone. The cotton picker spindle and bones still remained.

Uncomfortable that there might be something to really be worried about, he picked up his pace,but tried to show no reaction.

Then, days later, he could not resist. He stopped and studied the ground to see a shoulder bone had at some point been added to the grouping.  Apparently, it was adding to the carnage. 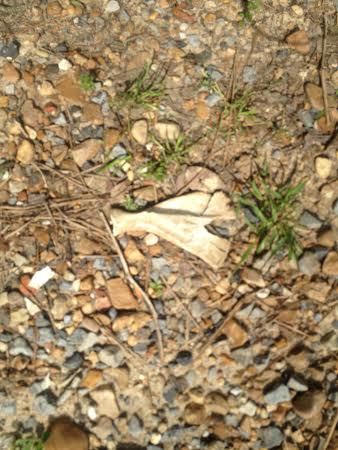 The Walker stood back up and sauntered away, trying to remain a casual composure as if only mildly curious about what he'd seen.

On another walk, having debated it over in his mind that this thing wanted another interaction, The Walker stopped. He pulled a ribbon from a tree that was used to help truckers know which gravel road to ride down to the quarry. He promptly bent over, tied it around the skull, straightened back up and thought to himself, "whatcha gonna do next?"

Over the coming weeks, the ribbon was gone. Whether it has somehow blown away or disintegrated or what not, The Walker did not know. He did not want to give it any credence. He walked by, barely averting his eyes, hoping whatever it was became disinterested and moved on. He lived not far from the site and he did not want to think of someone stalking him home.

Then, one day, while walking the route on his daily constitutional, he stopped when he saw a buzzard on a limb. The buzzard looked all wrong. It was brown, not black. The head looked like buzzard, but the feathers were odd. Could they crossbreed? It's wings were wide open and continue to remain open as he walked by, studying it. The Walker took a picture, just in case this bird was something odd and rare. But, there it sat, above the site.... 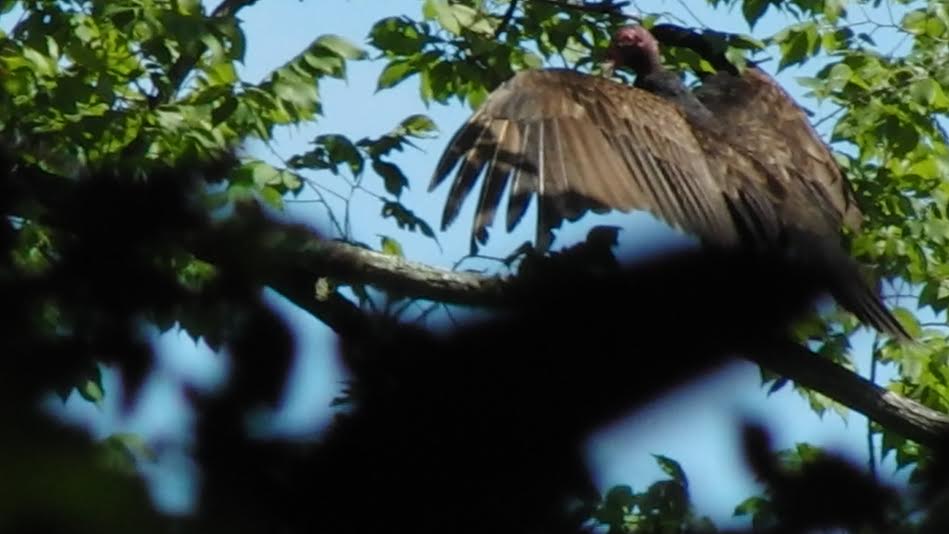 He knew something was trying to interact with him, the question was, did he want to interact back?