Could Sasquatch Have Chlorophyll In Their Blood? 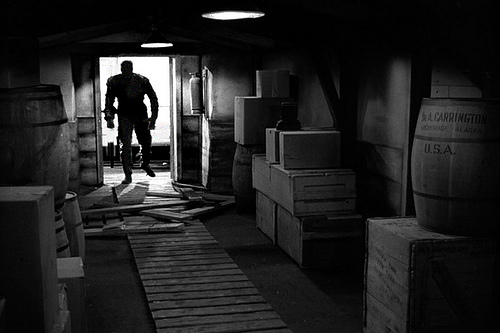 In the movie "The Thing From Another World," the big hulking alien had chlorophyll in his blood and had reparative properties, sort of like if you trim a plant and it grows again.

While reading a most interesting article about a supposed journal of a scientist found in his attic after his death, talking about his own examination of dead and dying Sasquatch, this passage caught my eye -

Source:  After further investigation, I found that these creatures were not human. They, in fact, had a remarkable rapid reparative process (hence the reason one of the creatures seemed dead--but in fact was regenerating to a degree). Unfortunately the restorative abilities of the creature were not enough to keep it alive. They were massive in size and distinctly a new primate species unknown to science at the time.

Let's propose for a moment that Sasquatch have both hemoglobin and chlorophyll in their blood. I will make a case for this intriguing concept below -

Let's suppose one of two possibilities - either take the concept that aliens designed Sasquatch to exist on Earth OR they were adapted from a much earlier evolutionary time than we were, for a world that was changing dramatically. Either way, they were made to survive Earth and any scenario here.

You'd have a creature that could breathe oxygen and also grow very rapidly (like plants), utilizing a natural-made resource within to nourish easily - with a kind of sucrose effect, as well as be able to repair itself rapidly or go for periods of time without oxygen (underwater or in stasis).

If the creatures' hairs were also translucent, there is every possibility that he could become cloaked in a greenish cast to blend right into the forest by utilizing a kind of stasis - less oxygen in - less "brown/red" look to the skin and more green cast which the translucent hairs would pick up. He'd have to adhere to a lower breathing level, a kind of meditative state, utilizing any sunlight available to increase the photosynthesis and green effect and raise his chlorophyll levels and lower the circulating oxygen.

Source: Years ago the suggestion was made that chlorophyll, the green pigment of the leaves of plants, is similar chemically to the nonprotein portion of hemoglobin. Subsequent investigations have borne out this view and have demonstrated that both are composed of a nucleus of substituted pyrrol rings. As is well known, the fundamental difference between the two pigments is that iron is present in hemoglobin whereas magnesium occurs in chlorophyll. The similarity of the two substances has prompted speculation regarding the possible value of chlorophyll as an agent for promoting blood formation. Animal experiments to test the possible existence of such a relation have yielded conflicting results. It has been stated that rabbits rendered anemic by bleeding recover more rapidly if chlorophyll is added to the diet. Somewhat similar results have been obtained by several other investigators in rats and in dogs.

One who had chlorophyll in his blood would need magnesium, like someone with hemoglobin needs iron.

(source) Volcanic activity helps to release more magnesium from the soil - are there more Sasquatch in volcanic areas? Well, Mt. St. Helens and Mt. Shasta are two very highly reported areas!  Grains, nuts, seeds, and fish give the highest amount of magnesium in a diet.  Magnesium enters the plants through the soil, so lands with high magnesium and plant material would be crucial for such a being to survive.

Magnesium is important for photosynthesis. Chlorophyll molecules contain magnesium ions. It's the magnesium that makes chlorophyll green.  Clay soils have extremely high magnesium. Sasquatch being extremely fond of East Texas might have a real technical reason - clay soil!  (of course, this is assuming they do have chlorophyll in their blood as this hypothesis we are entertaining suggestions - and, in that case, the reason for their dense location in this area might be for a natural element they need).


If we take this concept a step further - ghost lights. Ghost lights in the woods where Sasquatch are living are reported a great deal by researchers. Some of them try to chase the white lights with no success. Guess what makes white lights in fireworks? Magnesium.  And it can burn regardless of water and carbon dioxide environment.

This is like six degrees of chlorophyll. We could continue to find things that tie Sasquatch and chlorophyll together because they include elements that are found in the places where Sasquatch are.

What would it mean if Sasquatch were a primate that was hybridized like a hybrid car and able to run on two bodily transport mediums - chlorophyll and hemoglobin? Could they switch off and run on one or the other depending on conditions? And what might this mean for the concepts of underwater Sasquatch or blobsquatches, strange woodland lights and ability to repair the body rapidly? You can see why there are so many hypotheses with regards to these woodland folks, but I do mean to continue presenting concepts, tossing out ideas, and sharing some interesting finds I've come across in research.

NOTE:  This posting in no way suggests that it is true, but is providing a "what if" scenario. Sometimes, the more extraordinary aspects of Sasquatch must be explained by scientific means, but perhaps out of the realm of what we think we know about primates. I was inspired by the writing about Sasquatch's restorative qualities and the movie "The Thing From Another World." Oddly, there is a case to be made for the possibility. It makes for some interesting implications.