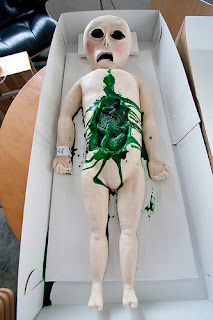 (Note: This is not the cake I made)

I have made an alien autopsy cake in the past. The problem is, the camera was stolen at the party by some folks who crashed in costume. Yeah, sucks, huh? It's not that hard and it's really a blast. I even made it at my son's birthday one year and the kids were nuts over it.

Once these cool, carve the round cake into a pointed oval like an alien's head. Now, take dental floss and saw it in half so it's a 2-layer cake.

Take the pan cake and cut four 2-inch wide x 9" strips for arms and legs. Saw these with dental floss into 2 layers. Take the rest of the rectangle in the pan and slide it into two layers too.

On bottom layers of cake take cream cheese frosting with a bit of red, blue, and yellow food coloring in it, just enough to make it gray and spread it on. Sprinkle gummy worms around the frosting and put the top on the layers.

Take a length of cardboard covered in a piece of white sheet or tablecloth taped to it to make a gurney top and lay the cake out so the body, arms, legs and head are in place. Now, take more cream cheese frosting dyed gray with food coloring and spread it around. Decorate the eyes and slit mouth with black colored frosting.

Serve alien autopsy cake with a surgical mask and scalpel and dramatically carved by a participant. 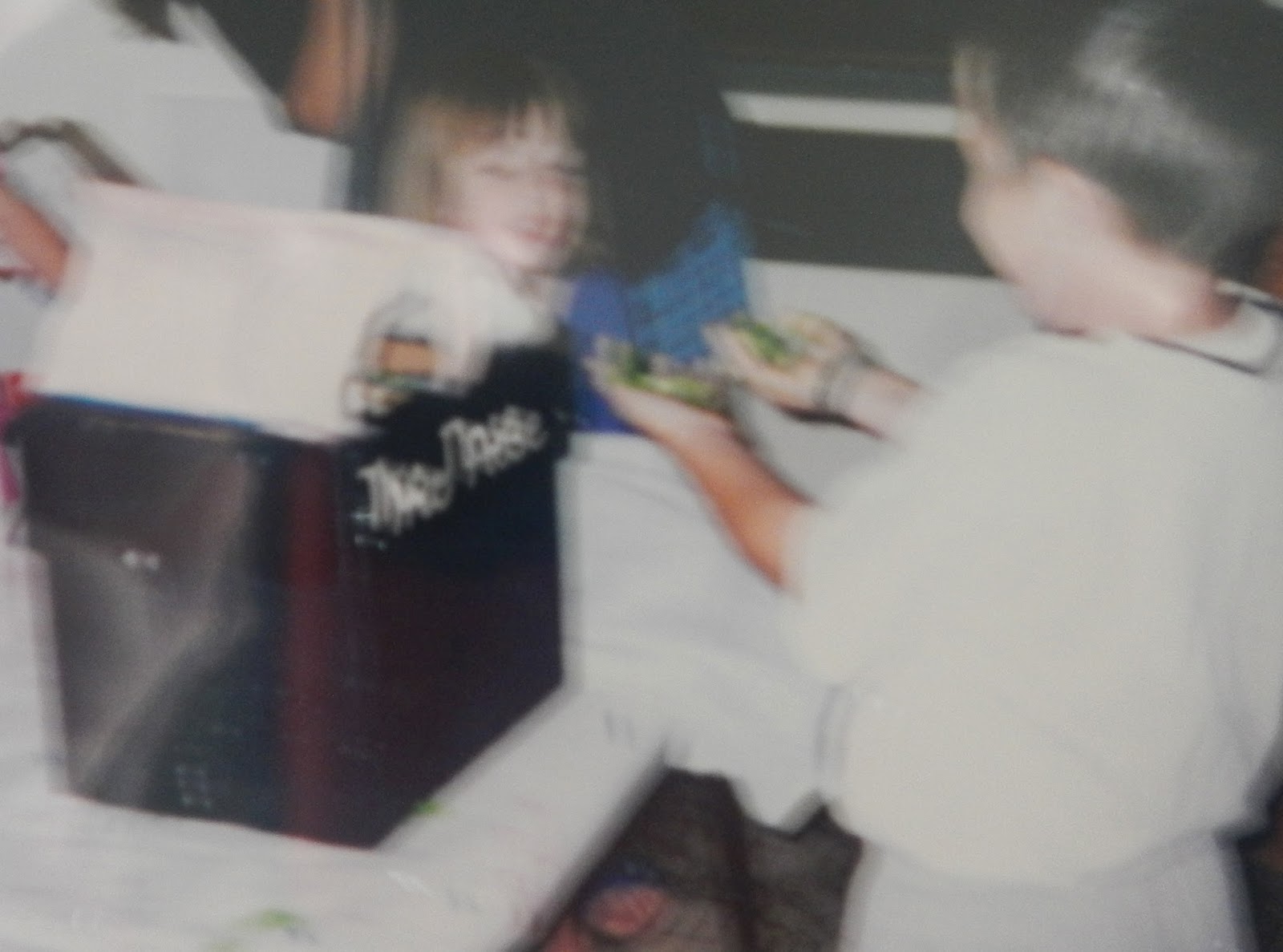 I made this when my son was in elementary school and this device visited his school every Halloween until middle school. It was so popular, even the principal wanted to come and do it.

Take a box (a box that carries printer paper works great). Carve two large holes in the top that arms can go down through and bend the edges of the holes inward so they're smooth (can use duct tape to make smoother).

Now, take a strip of cardboard and staple it on vertically between the two holes (this is the septum of the nose - nose bone). Take strips of newspaper dipped into a mix of glue water (equal amounts of each) and span them from the cardboard septum to the outside of the holes. You are building a giant nose of paper maiche that will leave the two holes as the nostrils. When you have built up enough nose and let it dry between layers, you can paint it and add a paper maiche wart to the nose. Paint the nose greenish flesh colored when done. This is the witch's nose.

Take a bucket and mix about 8 large packages of lime jello with hot water and cold water as directed on package. Put the bucket in fridge and let it chill until jello is firm.

Now, take wrapped individual candies, plastic rings and lego people and other small toys and treats into the jello. Put the bucket of jello inside the box, put the nose lid back in place.

Have the children put their hands down the nostrils into the green jello to pull out one prize with each hand. This witch's nose box is a huge hit at parties. The kids screech and delight in it and don't know what prizes they're pulling out.