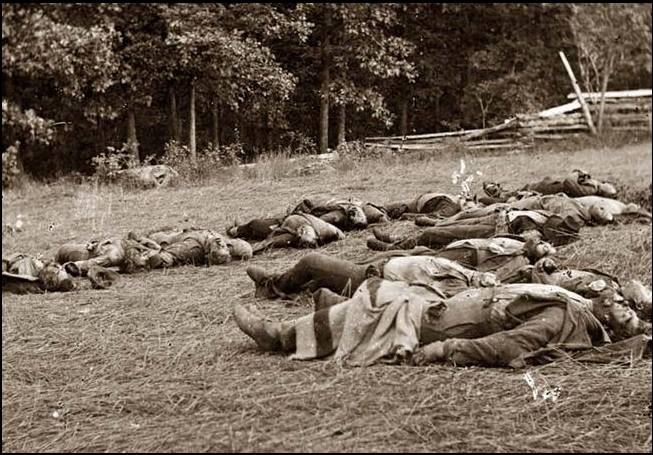 **This is a guest post by a living historian and paranormal enthusiast, "Jay Solomon."

So you want to experience psychic phenomena. But you don't have any idea where to go. You are not privy to haunted spots or so-called "haunted houses" and you are not a member of an investigating team. You think you would be a good asset to a team because you watched shows like Ghost Hunters. In reality you are as green as grass. You have no experience.

If you want to experience this you need to first know a few things.

The first thing to learn is that paranormal phenomena can happen at any time and anywhere. Most of mine have happened on or near battlefields ; particularly those of the Civil and Revolutionary Wars. And if you want to hopefully experience phenomena those are the best places to start. The battlefield is a good place because of the masses of casualties (killed, wounded, taken prisoner, and missing in action) and what remains afterword.

That brings me to my second point, The Law Of Conservation Of Energy. The human body is a complex mechanism. It is not just a mass of tissue and organs. It requires electrical impulses to function; energy. If you had physics in high school or in college you may remember that energy cannot be created or destroyed. It can be only be transformed. So upon the death or the ceasing of the function of the human body that energy remains behind in some form. 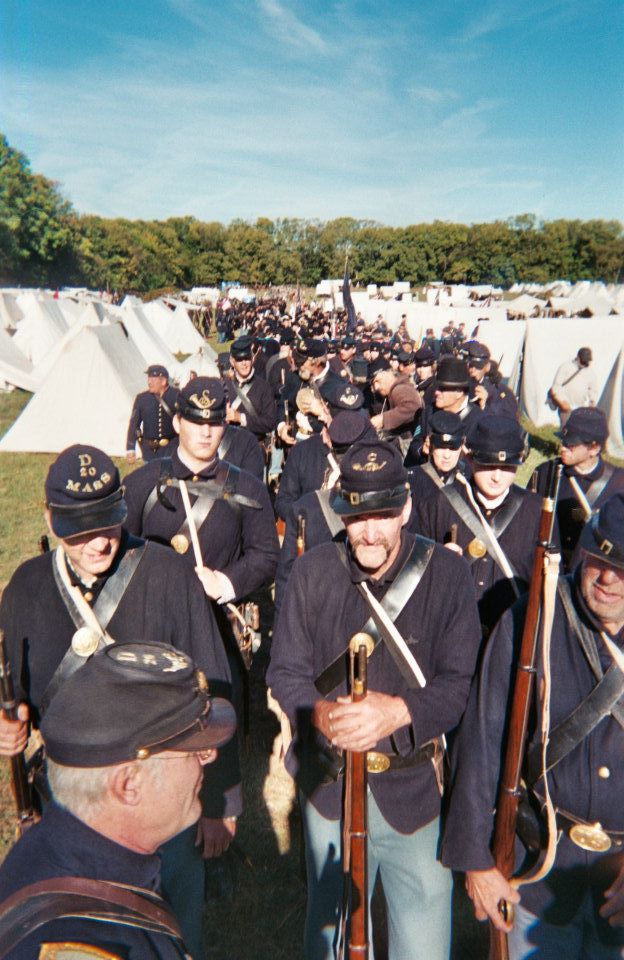 In his book "Ghosts of Gettysburg VII" Mark Nesbitt states that "... the dying human body releases about 1,000 times the normal 12 watts of electricity it constantly produces. ....this 12,000 watts of bioelectricity released at death [is] a "light shout"."1

Major General Joshua Lawrence Chamberlain (Colonel at the time of the Battle of Gettysburg) put a spiritual twist on that. In a speech given at his last visit to the battlefield in a couple of months before the battle's fiftieth anniversary he so eloquently said... “In great deeds, something abides. On great fields, something stays. Forms change and pass; bodies disappear; but spirits linger, to consecrate ground for the vision-place of souls… generations that know us not and that we know not of, heart-drawn to see where and by whom great things were suffered and done for them, shall come to this deathless field, to ponder and dream; and lo! the shadow of a mighty presence shall wrap them in its bosom, and the power of the vision pass into their souls.”

Before visiting a battlefield, it is good to know a little about where you are planning to visit from a historical standpoint. Don't be afraid to pick up a book or do a little surfing on the internet. It will only help you to understand and appreciate what happened there. It will also give you an idea where good spots for potential phenomena would be located. Know what happened at the bridge, the tract of woods or field of a certain crop. They will have names such as 'Burnside's Bridge'. Or simply, 'The Cornfield' or 'The Wheatfield'.

Folklore, too; often has at least a grain of truth behind it and can be a good source. You can use these stories to guide you to locations that have a reputation for being haunted. A fine illustration is a story of a woman who has been reported materializing when Yankees are near her home. The story goes that she has been seen to try and shoo soldiers away with a ghostly broom. A friend and I decided to test the truth of it. And being reenactors and living historians we already had the uniform and gear to go with it. Although Mrs. Otto did not materialize we certainly did feel her presence as well as her intent. She wanted us gone and escorted us to the other side of the bridge! 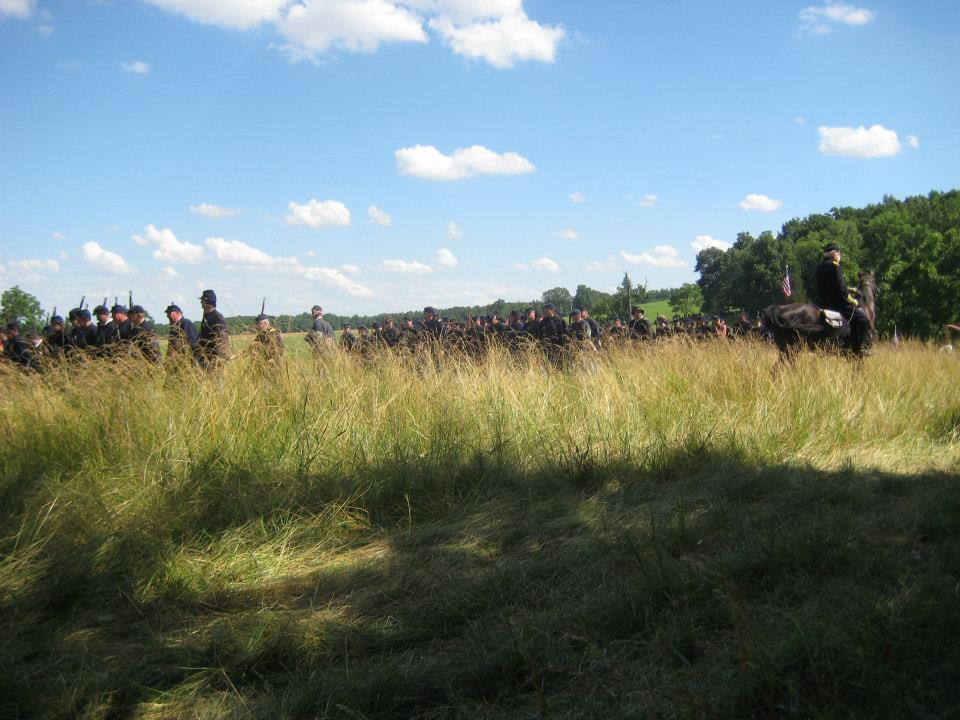 Although phenomena can happen any time; the evening hours are good for ghost hunting. The best time, in my experience, is that interval of time between daylight and night time. It seems that at this time the veil between the two planes of existence are the thinnest.
A good illustration of this is when a friend and myself had gone to and in what is known as the Triangular Field At Gettysburg. It is located on Houck's Ridge just west of Devil's Den. On the afternoon of July 2, 1863, Confederates of the 1st Texas were fighting to push 124th NY 'Orange Blossoms' off the ridge as part of Longstreet's Assault. The fight see-sawed back and forth as the 124th tried valiantly to at least delay the attackers advance. Several times the Texans charged and were beaten off. Finally the New Yorkers were beaten off but not after giving as good as they got. The field was littered with the dead and dying of both sides and is an often visited spot.

The vibes were so strong that my friend, whom has almost no ability at all, also sensed the them and the strength beginning to surround us. She also sensed the feeling of urgency to leave that particular spot. It was being conveyed to us that we were not wanted there and that we had to leave. We did; out of respect or consideration for them.

And that brings me to another point. When doing this activity a good rule of thumb is to treat the dead as they were still among us. Remember that they may not have the physical bodies but their personalities, their souls, remain. Treat them with respect. If you get the feeling that you are not wanted somewhere, by all means leave. Use the analogy that you have entered in to someone's home. How you are treated is a reflection of how you behaved. If you show bad manners your host will show you the door. But if you are non-threatening and courteous you can be treated as an invited guest.

Another thing to remember is that many of these battlefields have hours. They are managed and maintained by the National Park service (NPS). For example, Gettysburg during the summer is open from 6 AM to 10 PM. At that time you had better be off the battlefield or at least on your way. The National Park Service can take off-hour or unsanctioned visits quite seriously. If caught during this time one can be subject to a fine of at least $100 per violation. So please don't be on a battlefield after hours.

There are times that the NPS may allow investigation teams to go over the battlefield. They must be arranged with permission with the NPS and sometimes involve signing a waiver and paying a fee. The group may be monitored by a ranger or some other employee of the battlefield park. And that means to stick to paranormal investigations. Don't take it as a good opportunity to commit acts of vandalism or to dig for artifacts. You will ruin it for everyone, including yourself, should you get caught. The NPS has severe penalties for those who get caught. So unless you don't mind paying huge fines and doing some time in a federal penitentiary, stick to the purpose of your visit!

The following are examples of experiences of the paranormal at Gettysburg:

One man told me that he had been up on Culp's Hill at Gettysburg exploring the summit where the observation tower is and various markers. On their way up the road was a group of fellow tourist. Suddenly a volley of rifle fire rang out. This was not a company of reenaactors shooting blank cartridges, but a full-fledged, honest-to-goodness volley of fully loaded rifles. And it happened in broad daylight so close to the group walking up the hill, that some of the women covered their ears and screamed. The man on top the hill went down to the group. He had heard the volley, too. No reenactors were nearby and everyone was quite shaken up over the experience.

Another story involved three reenactors arriving at Gettysburg for a small reenactment and encampment on a July 4th weekend some time in the late '80s.  They had arrived just after midnight,  got dressed in their uniforms and began walking down Hunt Ave to the camp site. As they made their way down the road, a  mist appeared; and out of it walked three figures. Three figures of just the purest black. As the reenactors approached the figures; the figures turned in the direction from where they came and walked beyond a bend in the road. When the reenactors reached the area, nothing or no one was seen. They walked further up the road and saw the figures again some distance away, leaning on a fence and appearing to be smoking cigars. But as they got nearer to the figures, they faded. Upon reaching the spot where they had been they saw that there was chicken wire stapled to the outside of the fence.  Whomever or whatever was leaning on the fence had to leaning through the chicken wire.  Suddenly, something in the grass in the field in front of them was heard.  They looked and saw a set of footprints being formed in the grass. That was enough for the trio of  reenactors. They fled down the road cursing like sailors and running for the supposed safety of the car where they stayed until morning. 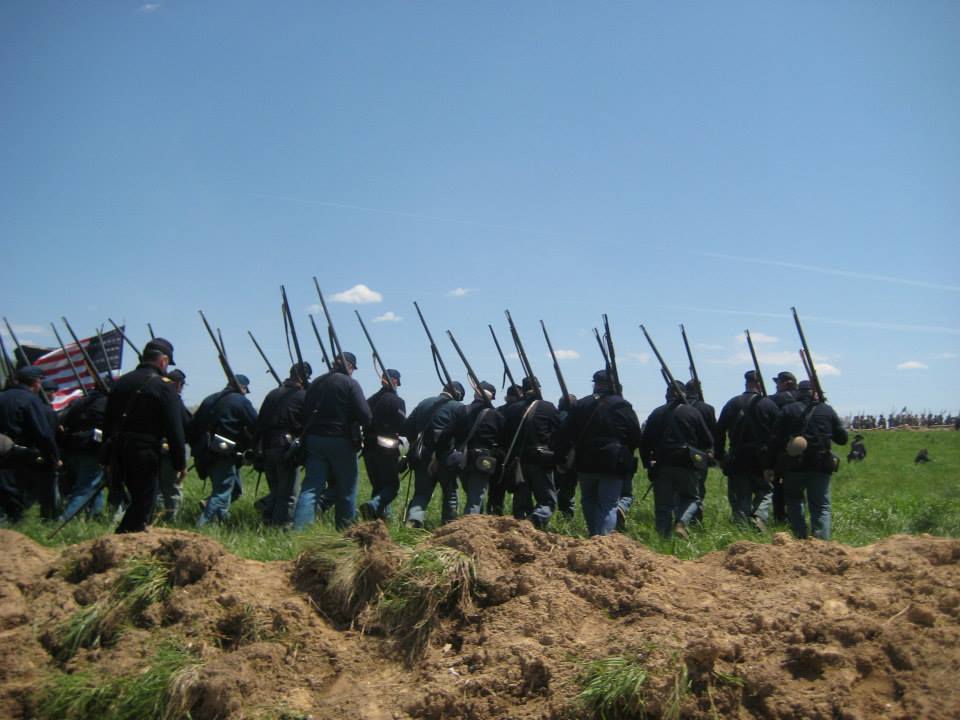 So there you have it.  Men and boys (and on the rare occasion, women) made the supreme sacrifice.  Sometimes they died slowly.  Other times they died in an instant.  But because they have not made the transition to the next plane of existence, their spirit, their souls remain earth-bound.  There are a few reasons why this happens.  They don't realize that they are no longer of the flesh.  Or,  they are afraid of judgment.  Another possibility is that they actually prefer to remain here.  Hence, they walk those fields.  And sometimes, when the conditions are right, our world will meld with theirs.