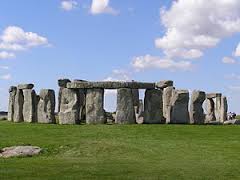 Stonehenge, UK
Back and forth, back and forth, there are ongoing debates about the importance of Stonehenge's reported astronomical significance. Some believe the "heel stone" is meant to mark the summer solstice, others say it simply frames the sunrise.
Apparently, growing evidence has shown that people visited it during winter solstice, not summer solstice, and so alignment features might be incidental. There are, however, some other sites in the UK that show more clear alignment, like Newgrange. 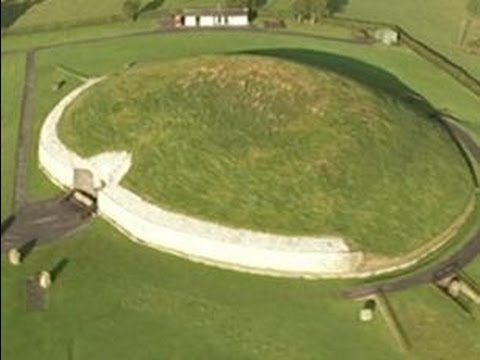 Newgrange, Ireland
This monument was built in Ireland around 3200 BC (earlier than the supposed 1500 BC of Stonehenge - closer perhaps to the "creators" of the knowledge).  This large circular monument had stone passageways and chambers within. This structure aligns with the rising sun and light floods the chamber during winter solstice.  Interestingly, there were other structures nearly identical in other areas of Europe. There was, apparently, a common knowledge. 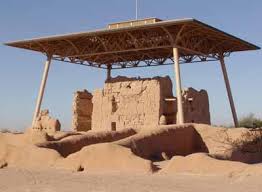 Casa Grande Ruins National Monument, Arizona
The ancient tribe of the HoHoKam in Arizona had built an extensive canal system that was very advanced, and built this astronomical site that was abandoned around the time the tribe went "missing" in 1450.  The walls were constructed aligned with the points of the compass and the windows opened onto sun and moon positions. Of course, if it were that simple, they were simply utilizing the rising and setting sun and moon for light within. Likely these "latter" people picked up the canal system knowledge and their knowledge of utilizing the heavens without understanding them as anything but practical concerns. Evidence of earlier "giant" civilization in Arizona was found many times over. 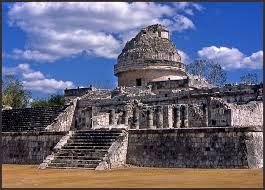 Mayans, Mexico/Central America
The Mayan civilization in Mexico and Central America began around 500 BCE. Interestingly, like Stonehenge in comparison to Newgrange, the Mayans came after the oldest civilization in MesoAmerica, the Olmecs. The Olmecs were the originators of the ancient astronomical and calendar knowledge later carried out by the Aztecs and Mayans.  This culture began around 1200 BCE and ended around 400 BCE. Coinicidentally, this is much like latter "Native" culture that adopted the knowledge of earlier civilizations, the "originator" civilization "disappeared. 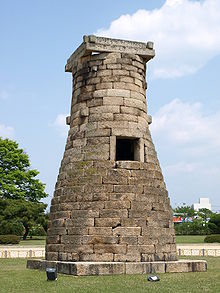 Cheomseongdae, South Korea
This was built some time in the 600s CE (common era/AD). Built out of 362 granite stones, some believe they represent the lunar days of the calendar. The 12 large set stones that hold it up, represent the months. This is the oldest observatory in East Asia. 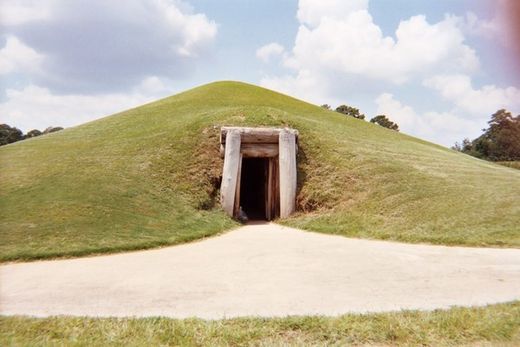 Ocmulgee, Georgia USA
Dating around 900 CE (AD), this mound has 55 seats inside and an altar the shape of a bird. The eye of the bird had a "forked leaf" design that is common for drawing comets. It also has astronomical alignments. On October 22nd, the sun aligns with the doorway and lights the chamber inside. There were also two pyramids and other buildings on the complex.

Interestingly, ancient man was not as archaic as we seem to think he was. There were lots of astronomical discoveries by people like Aristotle in the 4th century BCE, Copernicus in the 15th century, and Galileo in the 16th and 17th century, but it is apparent that man who was outdoors an enormous amount of his time and dependent on the seasons, had quite the obsession with the sky and the odd relationship between "feet on earth" humans and "up there" sky.

Is it possible that such knowledge and such structures were first incorporated by the originator culture of "first human migration" people? More than likely with a few hundred thousand years on us homo sapiens, they were already gathering vast knowledge that was utterly lost on our ancestors who came out of Africa, spreading throughout the globe and encountering people with god-like knowledge.

We homo sapiens were able to cobble together, steal, and imitate much of what they did, but we did not really grasp the deeper understanding, sort of like those of us who know enough about using a computer to talk to folks online and research, but not enough to fix it when it breaks down or understand just how it works and what its potential is.

This is why, I believe, these early astronomers we hold up as heroes were re-learning something already known by an ancient peoples and it seemed like a big "aha" moment for us, but looking at ancient sites, we must confess there is a discrepancy about when "man" discovered astronomical features and when "ancients" knew this stuff long before.