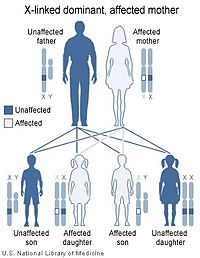 (Chart - above - hypertrichosis within a lineage)

Perhaps one of the most unsettling questions, but a valid one, is whether or not the ancient giant race mated with homo sapiens and if they were able to create hybridized offspring.  Interestingly, researchers found homo sapiens carry DNA of Neanderthal, Denosvans and an, as of yet, third party they have not identified.

What we might expect is for a chromosome anomaly to show up in our population that has origins we cannot define. We are lucky to have a condition such as hypertrichosis that we can actually go back in the records and find started in the Middle Ages and even know the location of its origin - with a people who were exceedingly tall, red and blond haired and different than the Spaniards who found them and mated with them. 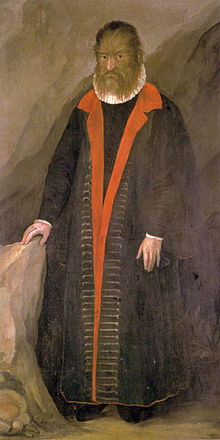 The lineage of the Petrus Gonzalvus in the Canary Islands was the first recorded case reported by Altrovandus in the late 15th Century (late 1400s). Interestingly, this is when the men of Spain who landed on the islands started mating with the attractive fair women prodigiously.  A hairy gene on islands referred to as the "Dog Islands" and talk of Anubis being a symbol of the people there.

Could we say that Julia Pastrana (below) was what some might have referred to as dog-faced in less enlightened times? 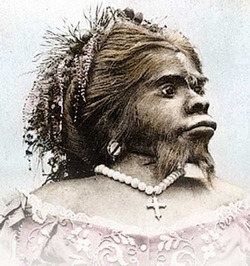 Julia Pastrana (1834-1860) was a woman born with hypertichosis who took part in 19th Century sideshow exhibition tours in North American Europe. Pastrana, an indigenous woman from Mexico, was born in  1834 somewhere in the Sierra of Sinaloa State. She was born with a genetic condition, hypertrichosis terminalis (or generalized hypertrichosis lanuginosa). Her face and body were covered with straight black hair. Her ears and nose were unusually larger and her teeth were irregular. The latter condition was caused by a rare disease undiagnosed in her lifetime, gingival hyperplasia, which thickened her lips and gums. Charles Darwin described her as "Julia Pastrana, a Spanish dancer, was a remarkably fine woman, but she had a thick masculine beard and hairy forehead; she was phoogarphed and her stuffed skin was exhibited as a show; but what concerns us is, that she had in both the upper and lower jaw, an irregular double set of teeth, one row being placed within the other, of which Dr. Purland took a cast. From the redundancy of the teeth, her mouth projected and her face had a gorilla-like appearance."

The story of Julia gets even weirder. She married the carnival manager who hired her and they produced a child. She died in 1860 after birthing and the baby soon after. The husband not only had her and her baby mummified for display, but married another woman with her condition.

The condition that Julia had was never linked to her father because her father was never named by her mother. Interestingly, that condition worldwide traces back to Middle Ages to the Canary Islands where Spanish explorers found the giant blond and red-haired women and mated with them. This gene was then introduced into a population that went and settled Mexico, Central and South America and introduced the gene variant to the world as people moved out and about and silently carried the trait.

Curiously, the Greeks called the people from the Canary Islands the Dog-Faced people. Dogs were highly revered there and even considered sacred and there were many legends of a Dog-Man type curiosity.  As well, researchers think that this isolated group on this set of islands that had no seafaring capabilities might have been part of a group of ancient times of Cro Magnons that had blue eyes and fair hair. If such were true, their inbreeding on their islands for thousands of years, might have contained the gene for hairy bodies within their gene pool. It might also be why the dog symbol was of importance, those born with this hairy attribute might have been quite revered. And hypertrichosis often comes with gingival hyperplasia that can cause what Julia (above) had - the jutting mouth and teeth.

Is this what might happen if ancient giants were to mate with homo sapiens? We would have to look at the gene more closely and have a sample of an ancient giant's DNA - perhaps an elongated skull from Peru, eh???

Could ancient giants mate with us? What were ancient giants?  It seems apparent they were another branch of mankind, not homo sapiens, but perhaps an offshoot of Homo Erectus. They could have been of Cro Magnon, our ancestor, but their height and their skull do not give with that. The skull of Cro Magnon was not sloped in the forehead and pronounced of brows and such as we find in the "Otamid" skull types found where these giants were dug up. 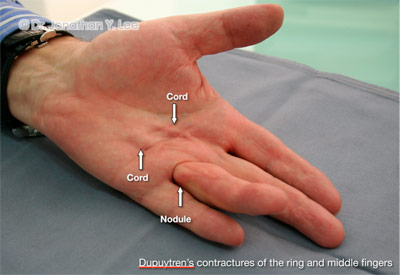 Dupuytren’s disease (DD) is an ancient affliction of unknown origin. It is defined by Dorland as shortening, thickening, and fibrosis of the palmar fascia producing a flexion deformity of a finger. Tradition has it that the disease originated with the Vikings, who spread it throughout Northern Europe and beyond as they traveled and intermarried. After being present for hundreds of years, DD was named in the 19th century after a famous French surgeon, who was not the first to describe it. This article reviews the history of DD and describes its incidence, clinical manifestations, and treatment. Researchers believe that the disease originated from earlier than the time of the Vikings from encounters with others they interbred with much earlier than the Middle Ages. 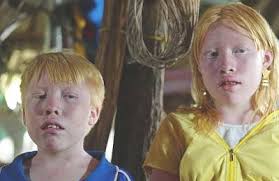 The Kuna People of Panama have the highest incident of albinism in their population and interestingly it's a rather unusual variation - lack of color in skin and hair, but eyes that are blue or brown, not red.  One in 145 births results in albinism. They are called "Children of the Moon" which is rather interesting. The Cherokee told of a tribe when they arrived in the Carolinas that they called the Moon-Eyed People because they were fair and only came out at night because sunlight hurt their eyes. They apparently killed them or "drove them away" and where they ended up is anyone's guess, but if albinism was part of the reason for the fair traits in the giants, then this might be another way to trace where they had been and who they had mated with.

Source:  Geneticists later determined that a gene on a strand of DNA known as Chromosome 15 caused the type of albinism common among the Kuna, which gives only minimal pigmentation in skin and hair. Rather than pink eyes common in albinos with no pigmentation, the Kuna albinos have blue or brown eyes.

The North America tribe of the Texas Coast, the Karankawa, had Otamid skull types (sloped forehead, os inca bone in the rear of the head and pronounced brow like giants) and tall height. Sadly, tribes such as Karankawa and Gaunches of the Canary Islands died off from the Spanish invaders and diseases brought to the regions, as well as skirmishes. They might have had some of the last fresh traits in their populations, as they appeared much like the giants, unlike today's people who might carry a variant, but do not resemble the ancient ancestor.

It would seem obvious that certain Native People around the world with unusual genetic disorders among them, who likely lived with and interbred with giants (if this were possible), would show some disorders in their population such as aborigines or Nazca people. If the tribes even today didn't breed much with outsiders, then it would seem these genetic disorders would show up prominently. We could learn much about these giant people of the past if we can see what sorts of genetic propensities they passed down.

Of course, we may never come to understand the genetics of this intermingling unless we first accept that there was a race of mankind that is ancient and unaccounted for. Perhaps once we do recognize them and study their genetic makeup, we might start to understand huge gaps in our own medical history and background.