The Origins of Ancient Giants: Asia Versus Africa 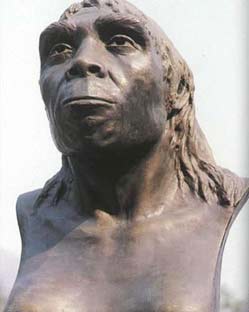 **Note: As everything on my blog, when I propose a concept, I am sharing with the readers, my take on a subject after much research. I offer links and correlations and highly encourage you to seek your own conclusions. These may not jive with your own personal belief system or religious belief system, but the more I concentrate on the origins of Ancient Giants, the more I am certain that believers in the Bible would be comforted to see another explanation for God's desire to wipe out a brutish branch of mankind and keep another more promising one - homo sapiens. **

We know that 100,000 years or so ago, homo sapiens (who shared the same Mitochondrial Eve - in other words, our ancestors) departed from Africa and spread throughout the world over the past 100,000 years.

What we don't know is who emerged from the proto-humans found in China and places like the island of Java in  Indonesia; the Java Man and Peking Man of Homo erectus origins.

Archaeologists, viewing the out-of-place "otamid" type skulls found in America from ancient times, have collectively repeated, they were not of Mongoloid origins (Florida bog, Texas Coast, Nevada Great Basin) as Amerind people of America, but appear to be of SE China region and an "earlier migration" (see all my giants posts on the right hand side of the blog in the "popular" column).

This also jives with the fact that ancient giants appear to have spread through Europe, but also made a stronger more concerted effort to take to the waterways of the South Pacific, entering Peru and heading up to North America to truly leave their traces everywhere as a culture of humans who had a huge jump on homo sapiens coming out of Africa, both in settling the earth and building technology and spirituality.

In fact, Peking Man remains that were found were about 500,000 years old.  Java Man found on the island of Java, was believed to have arrived there 1.8 million years ago when there was still a land bridge with Asia.

What we have is a branch of the human experience evolving outside of Africa and considerably ahead of those of us homo sapiens of Mitrochondrial Eve plunging from the continent of Africa into the big bad world around 100,000 years ago.

Skulls found in America at moundbuilder sites and the Western US are described similarly to have a prominent brow ridge, sloping forehead, and interparietal bones - these are all attributes easily derived from this Homo Erectus lineage. As well, with pockets of them evolving in isolated regions of the South Pacific, likely many closely related groups with different evolutionary features came together to prove the hybridization features of six toes and fingers and double rows of teeth (see my post on the right hand side about six toes and double rows of teeth to learn more about hybridization in closely related genus of man).

Mungo Man of 45,000 to 60,000 years ago in Australia was found to not be related to aborigines, but he almost surely was one of these people.


Interparietal bone aka "Os Inca."  This separate bone is particularly referred as Inca bone. Inca bones in humans were first found in the skulls of contemporary indigenous peoples of the southern Andes as well as in those of mummies of the Inca civilization.


Source:  The Inca bone was characteristically a primitive feature found both in Chinese Homo erectus and early Homo sapiens.  Inca bone is inherited as a dominant trait, with approximately 50% penetrance. Also Deol & Truslove (1957) suggested the strong genetic control regarding inheritance of Inca bone, based on their experimental studies on mice. (In other words, Homo erectus could have carried that down through his lineage as a dominant trait of his descendents).

In September 1941, Hu Chengzhi placed several skulls into two wooden crates. Around him, China was at war with Japan, so he was sending the skulls to the US for safekeeping. They never arrived. Hu was among the last people to see one of the most important palaeontological finds in history.

These lost skulls belonged to Homo erectus pekinensis, known as Peking Man. More than half a century later, evolutionary biologists would still love to get their hands on these fossils: not only would they help answer questions about early cannibalism among our ancestors, they could even shed light on the origins of spoken language.


The owners of the skulls died at least half a million years ago, and their remains were preserved in Zhoukoudian cave near Beijing, before being unearthed in the 1920s. At the time, they were the oldest hominid fossils ever found, and silenced skeptics who claimed that other similar Javanese fossils belonged to deformed apes. These bones clearly represented an early stage of human evolution. Their owners used tools, and were the earliest known wielders of fire.

A few years into the war in 1941, the keepers of the skulls decided to ship them abroad to avoid theft. The crates left Peking, but never made it to the port.

Java Man:  Java Man (Homo erectus erectus) is the name given to fossils discovered in 1891 at Trinil - Ngawi Regency on the banks of the Solo River in East Java, Indonesia, one of the first known specimens of Homo erectus. Its discoverer, Eugène Dubois, gave it the scientific name Pithecanthropus erectus, a name derived from Greek and Latin roots meaning upright ape-man. The current consensus of anthropologists is that the direct ancestors of modern humans were African populations of Homo erectus (possibly Homo ergaster), rather than the Asian populations exemplified by Java Man and Peking Man.

Source:  The island of Java, Indonesia, has produced a remarkable number of fossil hominid remains. One of the earliest specimens was found in Perning and consists of an almost complete calvaria belonging to a juvenile individual, known as the Mojokerto child -- these people having come to Java 1.8 million years ago when there was a land bridge with Asia.  (Perning I). Using computed tomography, this study details its endocranial features. The specimen is still filled with sediment, but its inner surface is well preserved, and we were able to reconstruct its endocranial features electronically. The Mojokerto endocast is the only cerebral evidence available for such a young Homo erectus individual. We provide an analytical description, make comparisons with endocasts of other fossil hominids and modern humans, and discuss its individual age and taxonomic affinities. The ontogenetic pattern indicated by the Mojokerto child suggests that the growth and development of the Homo erectus brain was different from that of modern humans. The earliest stages of development, as characterized by this individual, correspond to important supero-inferior expansion, and relative rounding of the cerebrum. The following stages differ from that of modern humans by marked antero-posterior flattening of the brain and particularly antero-posterior development of the frontal lobes, resulting in the adult H. erectus morphology.

What we end up with is a man from Southeast China reported by archaeologists as the potential source of the "first" migration to the Americas and the Mongolian ones heading across the Behring Strait much much later to enter the Americas and begin the Amerind - future Native American population.


This first migration would have included seafaring capabilities, advanced knowledge (much bigger jump on evolution and expansion), having established civilizations with ancient stone structures, mining, wells, pottery, written hieroglyphics, spirituality and more; all around the world, given the basis for homo sapiens "leap" in knowledge.  In fact, from their seafaring settling in the South Pacific and potential erection of huge stone sculptures on the islands, they eventually at the end of their phase here on earth (to our knowledge they ceased to be), settled into moundbuilding communities with mining and much more advanced techniques by the time they reached North America. This has helped to explain wide jumps in knowledge by the future "Natives" who would enter the Americas and spread out to South America. They were in contact with civilizations they had not seen before, learned many techniques and had that odd "clovus" leap in knowledge that was unexplainable before, but some archaeologists hint at a prior culture activating.


The elongated skull people with red hair in Peru and the otamid skull types of Yaghan and Nevada and Moundbuilders are all evidence of this homo erectus descendent from Asia. Likely, isolated in their evolutionary process on islands in the South Pacific, these people had some variations, but were still able to mate between themselves to produce those hybridization features I spoke of in the post on six-toed giants with double rows of teeth; an occurrence between closely related genus.

This is not an extraordinary claim, such as ancient aliens. It also does not credit homo sapiens with the basic knowledge of humans. But, it does show that with a bit of early influence as we left Africa and spread out, we learned technology, language, spirituality and more from these giant, robust, earlier people and took that knowledge and ran. It would also be apparent that we have made incredible gains in those 100,000 years out of Africa and are the last men standing.