**Note: This is another expert observation by Karl Sup who has been sharing with us his experience and knowledge in the field.** 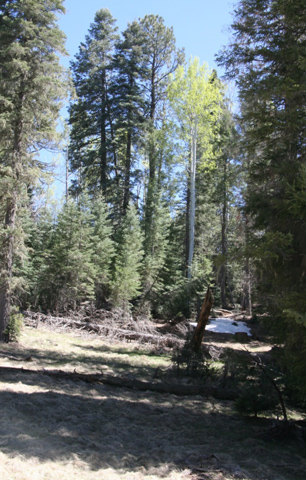 On Saturday, May 22nd, 2010 two excited Arizona BFRO Investigators contacted me to let me know they had found what they believed to be baby Sasquatch footprints in the focus area of our group research, not far from the location of my October 14, 2009 night vision sighting. This area is closed off from vehicular travel from mid-November until late-April or early-May typically due to snowfall. The roads had just opened up the day before due to the heavy winter snows this area endured. Knowing that my previous sighting was of a female subject, they jokingly said, ‘maybe she had a baby!’ They informed me that they were able to cast three out of the 15-20 prints that were found there in the creek bed mud.  Feeling very excited to cast the remaining prints, if any, I picked up a large quantity of Ultracal 30 on Monday morning, and took the next day off work to hit the road.

I arrived in the area at 10:30am and parked as close as I could to the longitude and latitude coordinates the investigators had provided to me. It was about 57F heading up to 68F that day. I got out of my SUV, and loaded my pack with tools, water and casting materials separated into Ziploc bags; each bag containing enough Ultracal 30 to cast one 17” adult footprint. I strapped this hefty pack on my back and started hiking alone into the canyon complex. I wasn't even 50 yards from the SUV when I heard a rapping sound of three consecutive taps. I stopped and listened quietly, assuming that since it was daytime it must be a woodpecker. I walked another 30 feet, and another set of rapping occurred. This pattern continued for the next 5 minutes, and followed my path. After getting into the canyon complex I heard the same rapping again, only this time I could easily distinguish that it was the contact sound a rock on rock clacking. Having heard this on at least six other occasions, I was surprised that this Sasquatch was out during the day. I walked another 100 feet into the meadow at the base of the canyon and heard the triplet clacking two more times.
Another 50 feet of linear hiking north in the canyon brought the biggest surprise. A LOUD, deafening tree knock occurred to the west of my position up on top of the ridge. I stopped dead in my tracks and turned to look up the hill towards the direction of the knock, but could see nothing. I estimated the knock occurred within 150 feet of my position. My attention was drawn quickly back to the north. Thick brush about 200 feet directly in front of me began to sway, crack and crash in at least three separate locations. Three individuals (unseen) moved quickly from the brush in the canyon floor area straight up the ridge to the west. I stood there for a few minutes to allow them some space, glanced to my left to the top of the ridge where the knock came from, nodded my head, and then continued down the canyon to the print location. 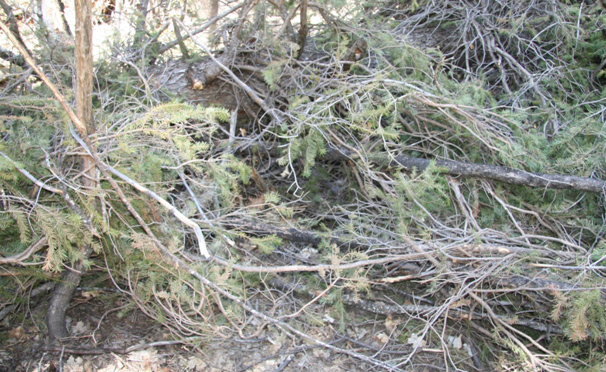 (Bedding Area. In this region of Arizona, Sasquatch appear to prefer Douglas Fir boughs. The branches from this tree fall had been arranged and placed and optimal angles to allow privacy and comfort. I will go into more depth on Sasquatch structures in a separate chapter.) 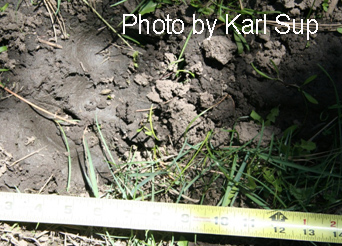 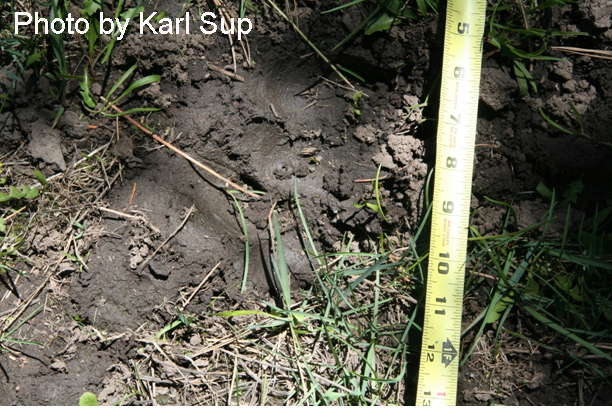 I arrived at the coordinates at 11:17am, but there was nothing there but quad tracks. After examining the site and surrounding area, I determined I had been given the coordinates of where my friend’s quads had been parked. I spent the next 80 minutes in disappointment looking for these prints from that central point and could not locate them. The closest cell phone reception was a hike back out and a 4 mile drive away or I would have called my friends, then and there, for different coordinates. I did find and cast some prints in a shallow, muddy area; but nothing that resembled the area in their photographs. One of the tracks had toe impressions from a left foot. They were much larger than the petite baby feet (see photo of my friend’s cast below). 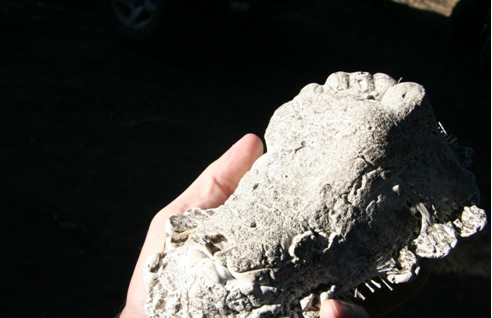 I reassembled my backpack and prepared to head back south through the canyon toward the SUV. The original plan had been to use up all of the casting material and water at that destination coordinates, but instead I was packing it all out again. At 7605’ elevation, I knew that I would need some stamina for the hike out. I saved out a bottle of water, some trail mix and jerky and found a nice ledge near the trickling creek. The silence in the forest was only broken up by light breezes that rocked the tree tops. I assumed I was still being watched closely.

With the toe cast dry, I headed back out. Before entering the canyon I had set a GPS waypoint for the SUV’s location. Rarely have I ever needed to navigate back with referencing it again, relying on landmarks, but the canyon splits a few times and uncertainty crept into my thoughts. I stopped in the middle of the open canyon floor, took off my pack and dug out the GPS. While I was waiting for the GPS unit to connect to the satellites, a loud branch snap was heard to the west from my location up the ridge. As I turned to look up the hill I caught a glimpse for a second of something taking two steps in stride behind a thicket of dense brush, traveling north to south. The sighting was so quick, that I wasn't sure if it was an elk or a Sasquatch. The mass was too tall and large to have been a bear or a deer. My mind was racing. I reasoned that IF it was an elk and that I had somehow spooked it, while quietly standing there, that it would have continued running away. I've seen plenty of spooked elk while hiking through the forests of Arizona; however I did find it interesting that it quickly moved at the turn of my head. I also considered that if it was a Sasquatch, it would continue to remain hidden to observe me. So I casually set down my GPS and dug my digital SLR camera from my pack sitting on the ground. 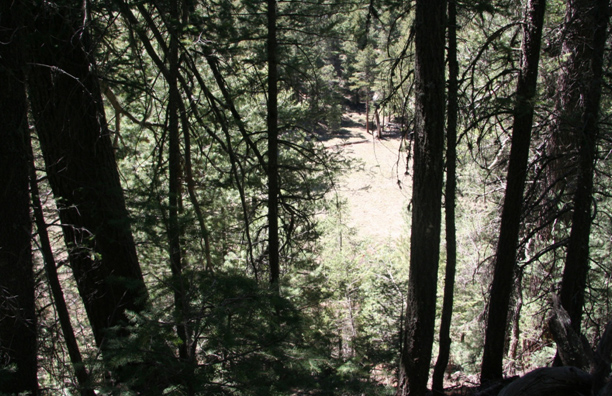 (View from where the Sasquatch was observing me)

It was about 1:15pm by this time. I held the large Canon EOS in my right hand, took the lens cap off, and slipped it into my pocket and took a deep breath. I turned and started to walk toward the dense brush patch near the top of the ridge up the hill. I had only shortened the distance by two or three steps in that direction when a Sasquatch exploded from the brush and sprinted back to the north along the ridgeline. The subject was a large male with incredible bulk; at least 8 feet tall (based on measurements taken later using landmark references). His speed was shocking and smooth. The sun was shining through the trees along the ridge that backlit him as he ran. My viewpoint was limited to 'slices' in between the tree trunks. The sun brilliantly shone through his hair with a brownish-orange hue, and it bounced and flowed with each step. The distance he covered was about 100 feet before reaching the denser brush and crashing through it. I was standing in the meadow about 100 feet from that ridgeline, and 40 feet in elevation below. From my perspective he covered the distance of his retreat in about two seconds. I was close enough to hear the WHOMP-WHOMP-WHOMP of the foot falls and heaving, deep breaths. His eruption from the vegetation was so fast and surprising that by the time I overcame my initial shock and started to raise and level my camera, he was gone. 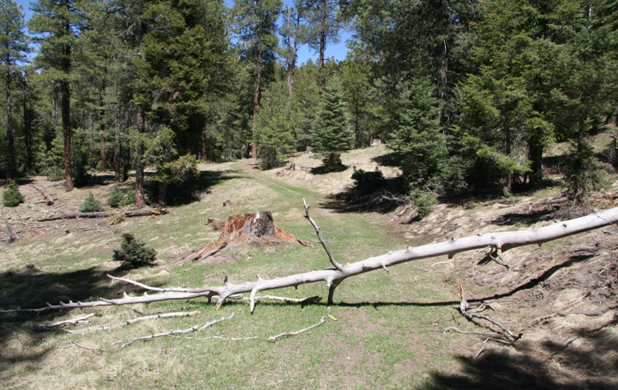 After he vanished, I stood there stunned for about 15 seconds. The crashing of vegetation had stopped after the first 5 seconds; the forest fell silent and still. I gathered my wits and started running up the steep hill to the ridgeline where it had been. I reached the thicket on the ridge, but found no real disturbance in the forest litter that I would expect from something so large launching into a run at that velocity. The litter was disturbed and flattened, but no prints were visible. As I was hunched over examining each flattened area closely, I suddenly became aware of the stupidity of charging up the hillside by myself, alone, and some amount of paranoia started to creep in. I picked up my camera and headed back down the hill, collected my things and returned to the SUV.

I had never heard of the ‘sentinel’ concept prior to this sighting. I did however get to experience one first hand. It seemed to me that his family was asleep and was not heeding his rock clack signals, so he had to tree knock to wake them up. If he had not done that I was on a direct line to walk right past the bedding area. After seeing the tremendous speed and agility of a Sasquatch running at a full sprint, even for such a brief duration, I can see how easily and quickly they can evade us. I can also understand how they could take down an elk or deer. If a Sasquatch truly wanted someone in the woods, it would have us before we could react based on strength and speed alone. This sighting actually has given me some peace when I am out on a night investigation, knowing that their intentions are not to harm us, but to scare us off to protect their families. I remind myself that every time I get rocks and sticks tossed in my direction. We are the intruders in their home, and we need to maintain and display respect.

Karl Sup is a software architect, developer and analyst, and an avid Bigfoot researcher working in the mountains of Arizona for many years.  During this research and in other states including Maryland and Wisconsin, he has been fortunate enough to interact with and view multiple subjects over the years. Karl also has had decades of audio analysis and editing experience, and assisted in helping M.K. Davis clean up and enhance audio from VHS tapes he has been studying and discovered the presence of infrasound within those recordings.