I'm interested in the giants of this region for several reasons. One of the reasons is that the reported footprints and bones in Australia, Indonesia, and South Pacific islands are much larger than anywhere else in the world, sometimes placing these giants in the 20+ foot range. As well, the giants reported to land in copper mining areas like Peru, the Imperial Valley, Texas coastline to head up the Mississippi region, were all very well seasoned boat builders and voyagers. If there was a birth place for ancient giants, the South Pacific seems a plausible location. 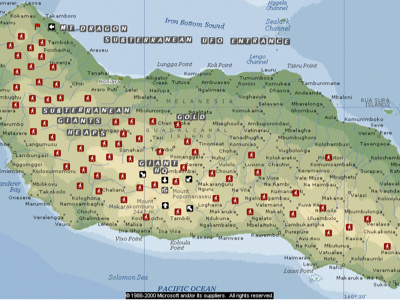 One credible witness to these is a once Prime Minister and the previous Guadalcanal Premier, Ezekiel Alebua. He recalls that when he was a child his father took him to a burial cave in east Guadalcanal. Inside was a complete skeleton that must be around 15 feet in length. To the local population on Guadalcanal, giants are common knowledge. Interaction with giants has been frequent through their history. The giant’s territory is a 1,000 square kilometre area of mountains covered in tropical jungle west of Mount Popomanaseu.
Local tribes, not only in Guadalcanal, but in most parts of the Solomon Islands have recorded a tumultuous historical relationship with the giants. The area is rich in memories of such encounters.  Giants allegedly still survive on Santa Isabel Island. Although they are fewer in number than on Guadalcanal, there are two areas where they live. Any local person is able to steer you in the right direction.  Another of the Solomon Islands is Choiseul. The island of Choiseul is not small. Some 300 kilometres long by 80 kilometres wide, it numerous villages. But there is one large area of its interior where no village exists. And apparently with good reason…living giants.


- I've often wondered if ancient giants were hairy - there aren't many descriptions of them, since they live before written documents, but some that appear to have lingered in remote areas are described, like these in Solomon Islands. This is very telling. Bones don't show us if they were covered in body hair and them existing 10s of thousands of years ago, no witnesses reported them. It intrigues me to think that perhaps they have always been just as Sasquatch and Yowie are today. -


SOURCE:  To my understanding, there are three different species or types of these Giants. The larger and more commonly seen are over 10 foot tall, but I have come across numerous Islander accounts with evidence that supports that they do grow much taller than that. These Giants have very long black, brown or reddish hair, or a mixture and when they want to have a good look at you, they pull it aside from their face with one hand. They have a protruding double eyebrow, bludging red eyeballs, and flat nose wide gapped mouth facial features, and have an unmistakeable odour, which the coastal people would once use as a sign of their presence, depending on the wind. From the large hairy type, they range down in size with reducing amounts of body hair. The smaller version, although bigger than normal human beings, are like a wild man living in the jungle and are not as hairy as the big ones. This is the way the Guadalcanal Islanders describe them. Inherently, when they see these small giant half human people, they make efforts to kill them. These smaller versions are lower down in the Giant social order, living predominately outside their caves systems in the jungle, although all three (types) are found in the Island’s jungle. Incidentally, there are many newspaper reports, even recently, of these hairy Giants in Papua New Guinea, and also may I say that I know for a fact that the Vanuatu people have also had a similar past with their Giants as the Solomon Islanders have had, as those that follow up on my research will find out.