Why Are Stairways Haunted? 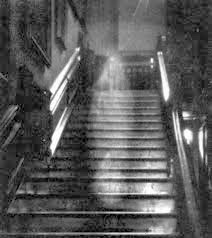 Staircases are often reported as haunted. But, why? There might be lots of factors at play.

Perception:  Visual and audio on a staircase is ideal for being able to frame a haunting - darkened stairwells and light between spindles allows you to see movements and shapes unlike in open rooms that are lit. The mechanics of stairwells are noisy and historically have made sounds whenever people walk up and down, perhaps allowing them to imprint a residual replay in the right conditions. And, sometimes, what is really a board releasing itself long after a person stepped on it, is interpreted as a ghost walking up the stairs. It is important to discern whether one hears a heel on a board versus a board creaking.  What could be at work here is the very real possibility that a building is haunted all over, but we are more able to perceive the haunting that takes place on a stairwell because of visual and audio conditions.

Energy Paths:  In Feng Shui principles, pathways that are straight allow energy to go up and down, especially with a door at the base of the stairs allowing chi to travel. It is said, if the stairway faces the front door, bad energy can enter and rush upstairs. We find that hallways and roadways are also quite haunted. Is this because they are major traveling methods that beat down residual paths from overuse? Or because they are straightaways that carry spirit energy more easily? In the book "Confessions of a Feng Shui Ghostbuster," the specialist explains that cluttered areas create sort of cul-du-sacs that trap energy and darkness attracts spirit energy. If you are likely to see passing energy, smell it, feel it, hear it - it could occur on a straight path of a dark stairwell.

Cycles:  There is something in the human body/mind that sets off a recording of sorts - this is how us psychometrists read objects others have touched and how residual hauntings remain and markers are laid down for perhaps a spirit to revisit past critical places where an emotion was released. What if stairways are an unique spatial marking device in which the mind during the process of repeated walking up and down stairs and cycling the brain into a boring task - manages to set a tag for the spirit to recall that place again? This is like the alpha state while falling asleep and waking that allows spirit interaction with people.

Example:  If anyone recalls the St. Augustine episode on "Ghost Hunters" show, you will recall that they chased a dark shape up the stairs.  Was this a case of spiraling energy caught in a round building on endless foray, metal stairs, a powerful source of power at the top of the building created a wonderful battery for playing out a haunting or was it easier for them to capture - given that they could see through the stairs, over the banisters, way up high to capture the entire building from an ideal viewing?