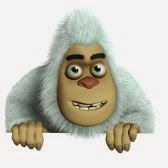 White Bigfoots. How do they happen? Why do they happen? Should we assume these reported white-appearing Bigfoot are albinos? That's our usual frame of reference. But, y'all know how I don't like to assume anything. If we stop with "it's albino" because that's our only reference, then we're screwed. Remember when we used to say "it's an ape" because they had hair all over their bodies?  Not all white-haired beings are albino.

Let's move on, shall we?

What are some possible reasons for a white Bigfoot? Aging process? Recessive gene that crops up? Could the very hairs on their body be the clue - perhaps they are depigmented completely but not necessarily depigmented of skin?


There are reports of a clan of white ones coming from the Red River area from Shrevport into Oklahoma/Texas border.  Some report that the white Bigfoot has very dark skin underneath. That would tend to cancel out the albino explanation.

There is a being referred to as the Lakeworth Monster seen outside of Ft. Worth, Texas in 1969. He was referred to as half man/half goat. This photo below was taken by a man during the summer of sightings. Perhaps what people were seeing was something they didn't expect - a white Bigfoot. It was certainly in an ideal location for one of the white clan reported in East Texas/Oklahoma, especially Lawton, Oklahoma where some believe a clan is based. 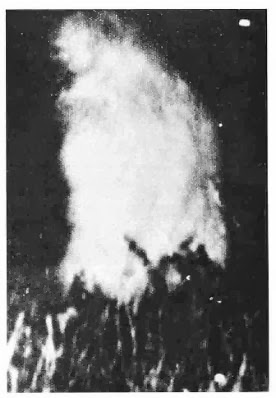 What we seem to find with Bigfoot is that witnesses report a wide variety of features, both facial and hair that lead me to the conclusion that within their branch of man, they also have races. Some Bigfoot are reported with an almost snout-like appearance, ape-like facial features, human-like facial features, and a wide variety of hair colors and skin color from pale to blue-gray to very dark almost black. If you look at our own population, a dark-haired man can have red body hair and a blond person can have darker body hair, so lots of variations are possible.

The intriguing thing about a white Bigfoot is their vulnerability. Where a darker-haired Bigfoot can blend right into the forest foliage, a white Bigfoot is going to have to be very crafty to get around in the day or even in the night.  Bigfoot are known to often use different methods of moving about from fast runs to standing still and blending in, to lowering their body and creeper walking and running on all fours. Here is a perfect example of how a white BF might try to clear a property as well as possible given it's bright and obvious coloring.  It would appear this fellow does a fast trot on all four through the open area, in the trees, stands up and runs fast.


This video (below) is rather popular but I have serious doubts about its validity. Bigfoot is a nighttime being and they have a very strong reaction to light, from headlights, flashlights, or sunlight. They immediately throw up their hands and squint. This one's eyes stay wide open.


There is no reason to think there is anything exceptional about white Bigfoot, any more so than red-haired ones and black-haired ones. It would seem that they do come in every color, but given the cryptid nature of these beings, the white ones surely have a time of it in the wild.  And, our chances of seeing a white Bigfoot versus another one if the two were in the same forest - well, it would certainly be easier and very memorable. So, perhaps the very fact that something so hidden can be so blatant is part of the fascination when it comes to white Bigfoots.